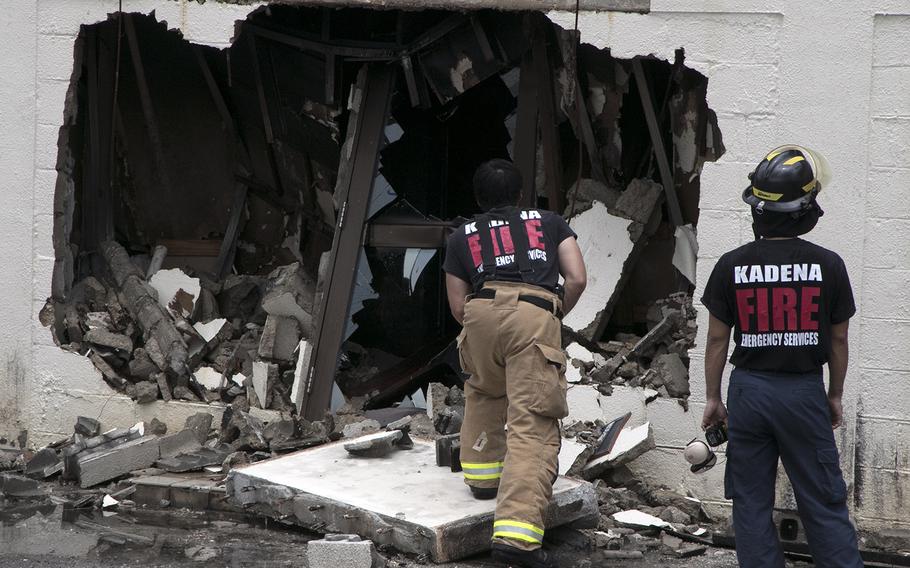 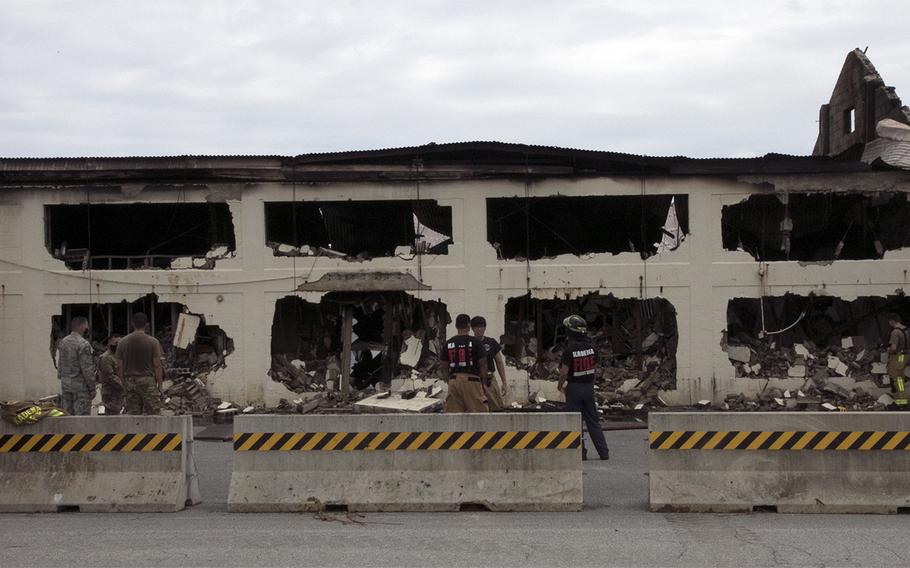 KADENA AIR BASE, Okinawa — Japanese officials said they lodged complaints with the U.S. military Tuesday, one day after a fire tore through a hazardous materials warehouse on Kadena and released chlorine gas into the air.

The blaze raged from about 9 a.m. until mid-afternoon Monday and dozens of base workers were treated for exposure to the gas and smoke. It destroyed the 18th Wing Hazardous Materials Pharmacy, a warehouse south of Kadena’s airfield in the central part of the base.

On Tuesday morning, a strong chemical smell hung in the air as firefighters stood among debris in what remained of the charred building, a hose at the ready in case of a flareup.

Chemicals, including calcium hypochlorite, were stored there, according to a spokesman for the Okinawa Defense Bureau who spoke by phone with Stars and Stripes on Tuesday evening. The bureau represents Japan’s Ministry of Defense on the island.

The spokesman said the bureau was told by the wing that water used on the fire was contained within the base. He said Kadena’s environmental department is monitoring the area.

Earlier in the day, Defense Minister Taro Kono criticized the U.S. military for not sharing information with the Japanese government in a timely manner while the fire burned at the home of the Air Force’s 18th Wing.

“I believe that during this fire incident, the U.S. military did not inform the Japanese side properly,” he told reporters in Tokyo. “I directed [my staff] to tell the U.S. military to share information promptly and rapidly.”

Kono said the blaze’s cause is still under investigation, adding he was barred from saying more, unless it was agreed upon by representatives from both nations.

“The fire with the chlorine gas particles caused huge concerns for the residents around the base as well as the people of Okinawa,” he told reporters Monday evening, according to the Okinawa Times. “It is very regrettable.”

Kadena officials asked Stars and Stripes to submit queries about the fire via email but did not respond to questions Monday or Tuesday. On Tuesday morning, an 18th Wing spokesman said a press release updating the public about the incident would be issued sometime that day. The release was later moved to Wednesday.

The fire began around 8:40 a.m. Monday, the wing said. Thick plumes of smoke smothered areas near the fire and closed off roads as firefighters worked to get it under control.

At just after 2 p.m., Kadena officials said on Facebook that the fire was contained but chlorine gas had been “released.” They canceled routine care at Kadena medical facilities and encouraged anyone experiencing breathing or vision problems to seek treatment.

Japanese citizens were instructed to seek medical care at the nearest off-base medical facility. Those traveling on base were told to keep their windows rolled up and air conditioning off.

“Approximately 45 individuals” were “affected by smoke and/or chlorine gas,” the wing announced on Monday evening. Most suffered “mild symptoms” and were treated and returned to duty.

The defense bureau spokesman said none of those individuals were Japanese, and no injuries from chlorine gas were reported by Kadena town residents.