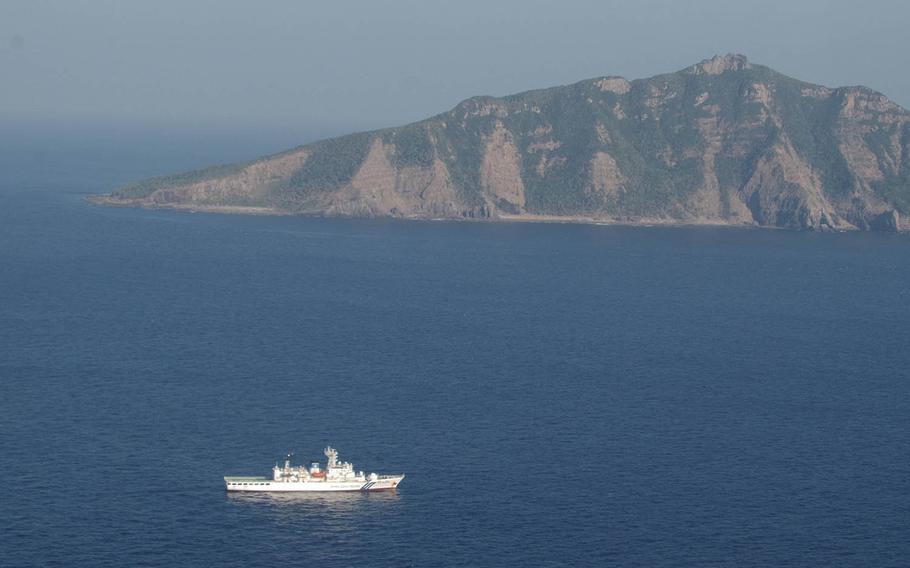 A Japan Coast Guard vessel sails in the East China Sea near Uotsuri Island, part of the Senkaku chain, in this undated photo. The Senkakus are controlled by Japan but also claimed by China and Taiwan. (Japan Coast Guard)

TOKYO — Japanese lawmakers are calling for joint U.S.-Japan military drills near a group of small islands in the East China Sea that have become a target of frequent incursions by Beijing, according to a blog post by one of the legislators.

About 100 members of Japan’s governing Liberal Democratic Party in a draft proposal Thursday suggested joint operations to strengthen control of the Senkaku Islands, according to the post. Japan asserts sovereignty over the islands, which are about 250 miles west of Okinawa, according to the Japan Ministry of Foreign Affairs website.

The proposal, which was posted on the blog of upper house member Masahisa Sato, raised in a concern that Beijing has “escalated acts of provocation” around the Senkakus, which China and Taiwan also claim.

“The Defense Ministry should conduct joint drills with the United States around the Nansei island chain including Kuba and Taisho islands,” the proposal stated.

Kuba and Taisho islands are part of the Senkakus. Though the chain is a barren group of rocks and islands that total 7 square miles, the surrounding area is a rich fishing ground and may hold oil and natural gas deposits.

The U.S. military in Japan “looks forward to any opportunity to increase our interoperability and strengthen the U.S.-Japan Alliance,” U.S. Forces Japan spokesman Gunnery Sgt. Derek Carlson told Stars and Stripes in an email Friday. “Interoperability” is a term the U.S. military uses to describe the ability of a country’s armed forces to use another country’s training methods and military equipment.

“Training and readiness is our top priority and we will continue to engage with the government of Japan to find new ways to grow stronger, together,” Carlson said. “The alliance has never been stronger, and it’s never been more important to this region than right now as we face difficult security challenges.”

Chinese ships had sailed through the waters surrounding the Senkakus, which Beijing calls Diaoyu, for 111 consecutive days between April 14 and Aug. 2, according to the proposal. Last year, China sent a record-breaking 1,004 ships past the islands, the Japan Coast Guard said in December.

“It is necessary to recognize that it is an extremely important issue surrounding Japanese sovereignty as China has raised its level of provocation,” the proposal said.

Japan has effectively dominated the islands but needs to further enhance the effectiveness of its control, according to the proposal.

The Senkakus are part of the “first island chain” that China uses to distinguish its controversial nine-dash line, which Beijing says outlines what it considers its territorial waters. An international tribunal refuted this claim in 2016, and the U.S. in July announced formal policy rejecting the concept.

Protecting Japan’s sovereignty over the islands is key to both Japanese and U.S. strategy regarding China, said Stephen Nagy, a politics and international studies professor at Tokyo’s International Christian University.

“The first island chain is an artificial boundary line where Chinese ships need to penetrate if they want to go out to the Pacific,” Nagy said. “If [Japan] can maintain control on this island chain, what they can do is limit Chinese assertive behavior beyond that point.”

The Pentagon has said an attack on the islands would invoke the U.S.-Japan Treaty of Mutual Cooperation and Security, meaning the U.S. military would be obligated to respond.

“Our partners in the Japan Self-Defense Forces are incredibly capable allies, and we continue to train and exercise together to improve interoperability and strengthen our capabilities,” Carlson said.

The Liberal Democrats plan to submit the proposal to the appropriate ministries soon, according to the post.