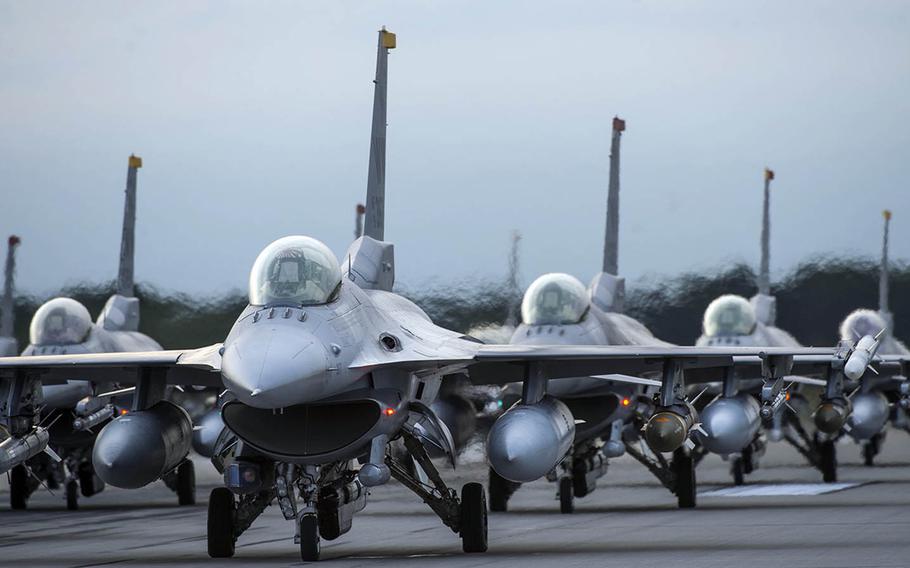 Local fisherman are seeking compensation for a fishing ban imposed after a U.S. military aviation mishap this week in northern Japan.

An F-16 Fighting Falcon assigned to Misawa Air Base’s 35th Fighter Wing dropped two external fuel tanks into Lake Ogawara after an engine caught fire shortly after takeoff on Tuesday morning. No one was injured in the incident, and the aircraft was able to return safely to the base.

Japanese Defense Minister Itsunori Onodera said Tuesday that officials spotted parts believed to be from the F-16 in the lake, and that the water surface was smeared with oil.

The Lake Ogawara Fishing Association instituted the ban the same day, group officials told Stars and Stripes on Wednesday. It will remain in effect until the tanks are removed and fuel is cleared from the water.

Since it is the height of freshwater shellfish season, local fisherman are looking at a loss of up to $37,000 per day from shellfish alone, the officials said.

Onodera told reporters Wednesday that the defense ministry will assess the damage and then coordinate to compensate the fishermen.

A Tohoku Defense Bureau spokesman said the agency has requested that U.S. military officials take preventative measures and provide information about the incident.

Air Force officials said the accident is under investigation.

“The safety of our airmen and our Japanese neighbors is our number one priority during flying operations,” Col. Scott Jobe, 35th Fighter Wing commander, said in a statement. “We will conduct a thorough investigation to determine the root cause of this incident.”

Japanese broadcaster NHK reported Wednesday that Jobe apologized to Misawa Vice Mayor Koichiro Maita shortly after the incident, which is the latest in a string of mishaps involving U.S. military aircraft in Japan.

On Dec. 13, a CH-53E Super Stallion’s window inexplicably became separated from the aircraft and landed on an elementary school sports field adjacent to Marine Corps Air Station Futenma’s fence line. More than 50 schoolchildren were playing at the time, and a boy was slightly injured from a pebble that flew up during impact.

Last month, Defense Secretary Jim Mattis apologized to Onodera for the mishaps, which included the emergency landings of Okinawa-based Marine Corps helicopters. He also vowed to address the “important” issue of aircraft safety.