Japan to keep ‘maximum pressure’ on North Korea ahead of summits 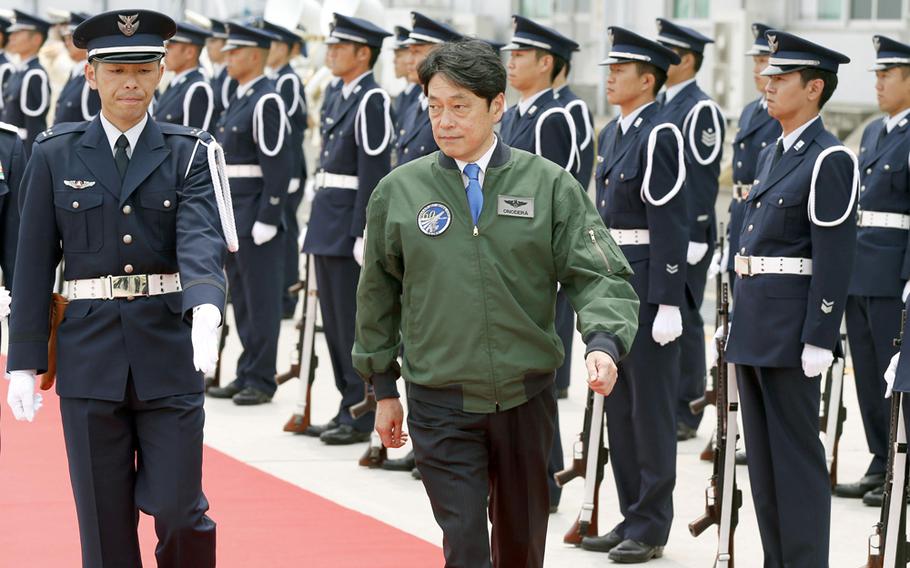 Japan's Defense Minister Itsunori Onodera, center, reviews honor guard ahead of a commemoration ceremony to mark the 60th anniversary of the foundation of Japan Air Self-Defense Force, in Irima, near Tokyo Sunday, May 25, 2014. (Kyodo News)

Itsunori Onodera — speaking this week at a Tokyo symposium on North Korean missile developments — said Japan will continue to monitor movements by the communist state.

“We will put maximum pressure on North Korea as we are committed to complete, verifiable and irreversible dismantlement of nuclear and missile plans by the North and for it to take specific actions toward denuclearization,” he said.

North Korea has faced punishing economic sanctions and diplomatic pressure since demonstrating rapid progress in its goal of developing a nuclear weapon that can reach the U.S. mainland. Last year, it test-fired three intercontinental ballistic missiles — including two that flew over Japan — and conducted its sixth and most powerful underground nuclear blast.

Seoul officials who visited Pyongyang recently said Kim agreed to hold summit talks with South Korean President Moon Jae-in in late April. Seoul said Kim then proposed meeting with Trump, who agreed to do so by the end of May.

Satoshi Maeda, director general of Japan’s Defense Policy Bureau, told the symposium that the North has a track record of broken promises.

“Because of the past history, it is hard to be optimistic,” he said. “It is extremely important to have [North Korea] take visible action and not just by words.”

Over the weekend, U.S. National Security adviser H.R. McMaster met his South Korean and Japanese counterparts — Chung Eui-yong and Shotaro Yachi — in San Francisco for talks on denuclearization and the summits.

“The three national security advisors committed to avoiding mistakes of the past and to continue coordinating closely in the weeks ahead,” a White House said in a statement.

It didn’t elaborate but likely refers to criticism that North Korea previously used disarmament negotiations as a way to ease outside pressure and win aid while secretly pressing its weapons development.

Japan is said to be feeling left out as the U.S. and South Korea push ahead with talks with the North Korean leader. Officials are reportedly concerned that issues such as the abduction of Japanese citizens by the North and the communists’ midrange ballistic-missile program won’t be included in the summits.

Soon after the talks were announced, Trump spoke with Japanese Prime Minister Shinzo Abe by phone to arrange an in-person meeting before talking with Pyongyang. Abe is expected to push for “deep discussions” on how the U.S. and Japan can work together on North Korea, Chief Cabinet Secretary Yoshihide Suga told reporters Monday.