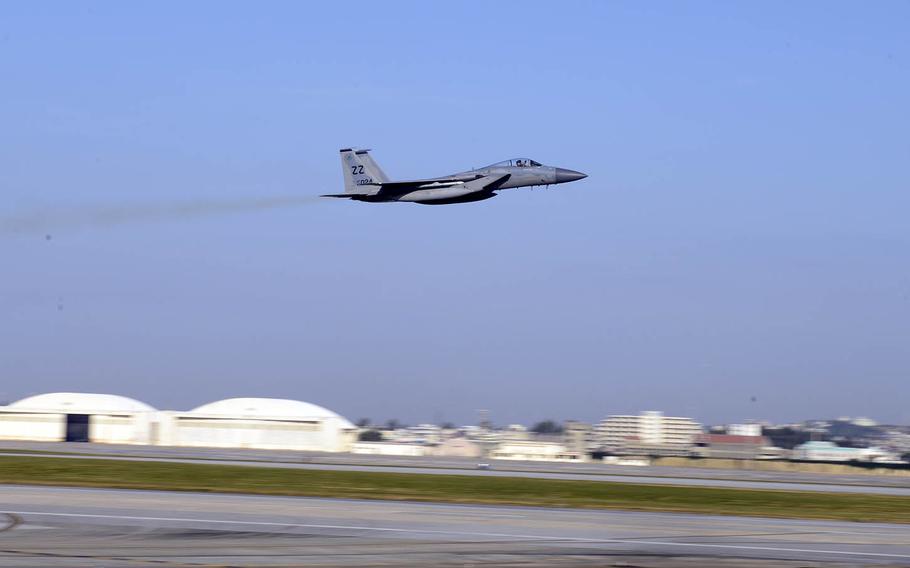 An F-15 from Kadena Air Base lost the part during a flight on Feb. 27, according to a spokesman from Japan’s Defense Ministry. The antenna measured approximately 15 inches by 6 inches and weighed about 3 pounds.

When objects fall from Okinawa-based U.S. military aircraft, the U.S. usually informs the Defense Ministry through the prefecture’s Defense Bureau, Defense Minister Itsunori Onodera told reporters Wednesday. That did not happen in this case until Monday – nearly a week later.

Japanese officials want to know where the part fell, whether it was recovered and if there were any damages.

“We have told the U.S. side to make sure to notify us,” Onodera said, according to his spokesman.

U.S. Forces Japan told Stars and Stripes Wednesday that the part likely landed in the ocean and "posed no threat to people or property on the ground."

"USFJ is working with the unit to determine the reason for the delay in reporting," an emailed statement said. "Once the incident was reported to USFJ, we notified the Government of Japan in a timely manner."

On Dec. 7, a plastic part thought to belong to a U.S. military helicopter was found on the roof of an Okinawan nursery school.

In October, a Super Stallion made an emergency landing in a farmer’s field outside Okinawa’s Northern Training Area after an inflight fire. The aircraft was an almost total loss.

But the U.S. military isn’t alone in experiencing aviation-related mishaps in Japan.

A Japan Air Self-Defense Force CH-47J assigned to Okinawa’s Naha Air Base dropped a rear cargo door while training Tuesday evening in Kagoshima prefecture, a JASDF statement said. There were no injuries.

Two JGSDF crewmembers were killed last month when an AH-64 Apache helicopter crashed into a home in Saga prefecture.

The JASDF and Maritime Self-Defense Force lost seven crewmembers between two helicopter crashes at sea in August and October.