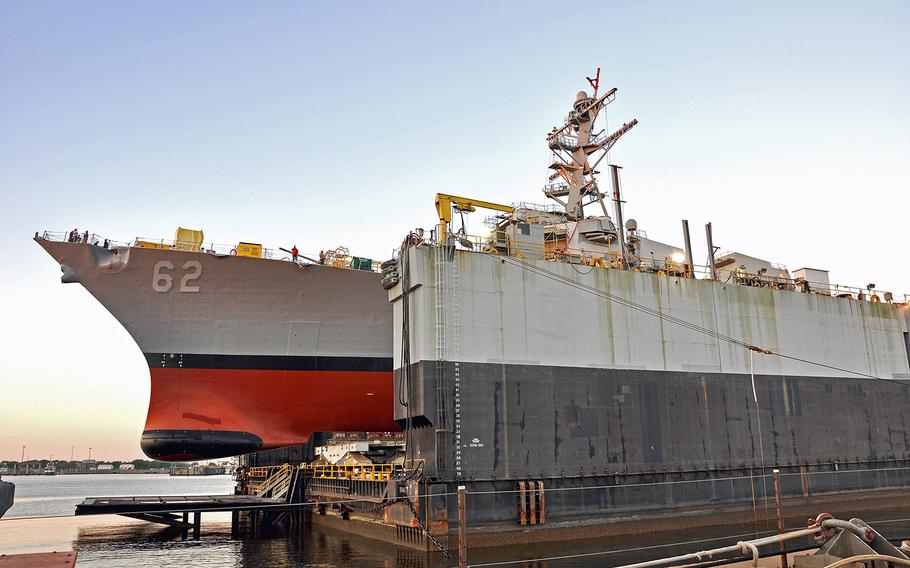 YOKOSUKA NAVAL BASE, Japan — More than two years after seven sailors aboard the USS Fitzgerald in a collision with a Philippine-flagged container ship south of Japan, the Japan Transport Safety Board released its report on the causes.

Released Thursday, the findings echo a U.S. Navy report from late 2017 saying the accident was “preventable” and that the destroyer’s watch standers contributed to the incident.

Seven Fitzgerald sailors were killed June 17, 2017, when the destroyer ran into the Philippine-flagged ACX Crystal about 60 nautical miles southwest of Yokosuka, where the warship is based.

“It is somewhat likely that USS FITZGERALD … was not properly on the lookout for ACX CRYSTAL,” Japan’s report said.

Watch standers paid more attention to another container ship sailing “parallel in the north of ACX Crystal,” distracting them from focusing on the Philippine ship, the report said.

ACX Crystal signaled the Fitzgerald with a daylight signaling lamp prior to the collision, Japan’s report said. The Navy report said the Fitzgerald’s officer of the deck “fail[ed] to sound the danger signal and fail[ed] to attempt to contact Crystal on bridge-to-bridge radio.”

ACX Crystal’s crew “expected that the USS Fitzgerald would recognize them and avoid ACX Crystal,” so it did not change its course or speed, Japan’s report said.

The report was ordered after the collision in accordance with Japanese law to determine its cause, “thereby preventing future accidents and reducing damage,” board chairman Nobuo Takeda wrote in the report translated from Japanese.

“It is not the purpose of the investigation to apportion blame or liability,” he wrote in the report.

It listed four suggested safety actions crews should take to “prevent recurrence of the same type of accidents.” These included properly adjusting all radars “to sufficiently judge surrounding situations” and not operating on assumptions of neighboring ships’ intentions.

“When [a] vessel fails to understand the intensions or actions of other vessel, or there is doubt that other vessels are taking sufficient action to avoid a collision, warning signals shall be sounded,” the report said.

After the collision — and another in August 2017 involving the Yokosuka-based USS John S. McCain that killed 10 U.S. sailors — the Navy has taken steps to prevent future incidents by implementing about 100 changes. These include tightening surface warfare officer qualifications to improve watch standing.