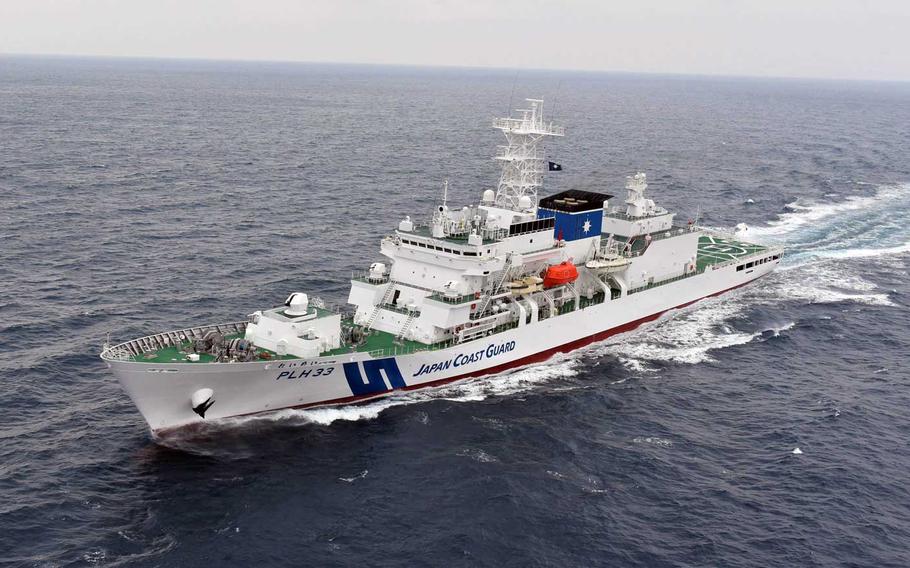 Japan plans to build a larger patrol vessel designed for helicopter landings, like the one seen here, in fiscal year 2021. (Japan Coast Guard)

Japan's Cabinet pledged recently to add new ships and aircraft to the nation’s coast guard this year in response to an increasing Chinese naval presence in the East China Sea.

Chinese vessels in 2020 made a record 333 trips to the area around the Senkaku Islands that Japan claims as its contiguous waters, besting the previous year’s record of 282, according to the Japan Coast Guard website. Taiwan and China also claim the uninhabited chain, which China knows as Diaoyu Dao.

The Chinese stayed in those waters a record 111 consecutive days while periodically harassing Japanese fishing boats, according to the Japan Coast Guard.

“The situation at the Senkaku Islands and Yamato Bank has been pretty serious and we will make sure to execute the 2016 plan to strengthen maritime security so that our maritime officers can fulfill their duties with adequate equipment like a new patrol ship,” Prime Minister Yoshihide Suga said at a Dec. 21 meeting at his Tokyo office. “We will keep adding the supplemental budget as necessary to strength our maritime security.”

Yamato Bank is an underwater mountain range in the center of the Sea of Japan, between the Japan’s Honshu island and the Korean peninsula.

In 2020 the Japan Coast Guard added four new boats and a helicopter, and this year plans an additional large patrol craft with a helicopter pad, another helicopter and a jet aircraft, according to the coast guard website.

“We feel more assurance by strengthening maritime security in such a critical situation,” Foreign Affairs Minister Toshimitsu Motegi said at the Tokyo meeting. “We will continue to take calm but firm action against other countries when they invade our territories.”

Suga, Motegi, Defense Minister Nobuo Kishi and coast guard commissioner Takahiro Okushima at that meeting discussed progress on a 2016 plan to bolster the coast guard, according to the minutes posted on the coast guard website.

Kishi promised greater cooperation with the coast guard. Japan in the past few years has launched its own version of the Marine Corps, under the Japan Ground Self-Defense Force banner, floated the idea of sending the Japan Maritime Self-Defense Force to patrol the area, and begun development on underwater drones and supersonic glide bombs to monitor and defend the southern island chain.

Japan has also commissioned new military bases on Miyako Island, which is part of Okinawa prefecture, and in two spots on Kagoshima prefecture’s Amami Oshima island.

Japan controls the uninhabited Senkakus, 230 nautical miles west of Okinawa, and purchased three of its islands from a private owner in September 2012.

The U.S. has declined to take a position on the islands’ sovereignty; however, Presidents Barack Obama and Donald Trump both have said they fall under the U.S.-Japan security alliance.

Japan planned to launch a new unit of “highly trained,” submachine-gun toting cops in Okinawa in fiscal 2020, which runs until April, tasked with defending the southern island chain, NHK reported in September 2019. As of April 1, 2020, 151 officers were deployed for this border security force, an Okinawa Police Station spokesman told Stars and Stripes on Tuesday.