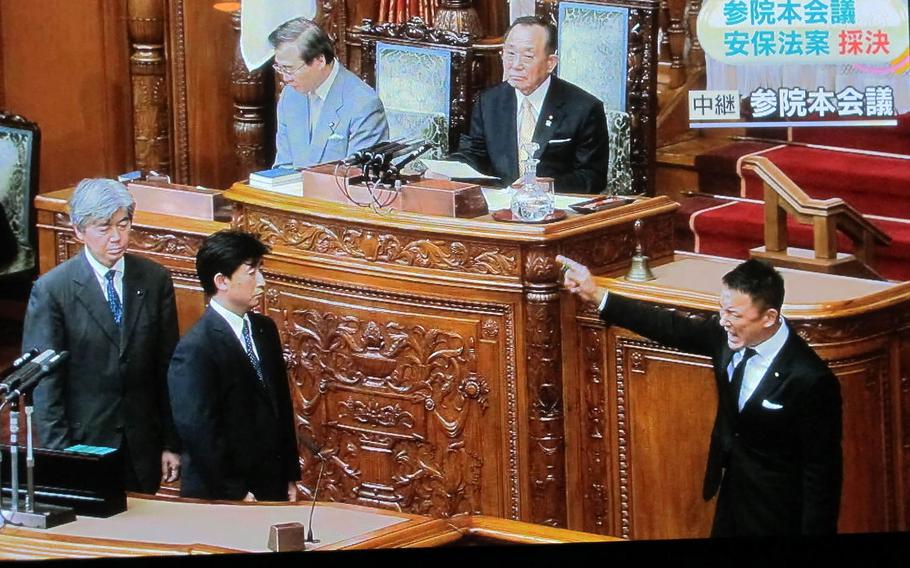 The package of 11 security bills and amendments backed by Prime Minister Shinzo Abe — and generally supported by U.S. officials — passed a Diet upper house committee on Thursday, despite a shoving match between lawmakers, leading to attempts on Friday at a floor vote.

Five opposition parties on Friday went about blocking the government’s wishes to pass the bills before a five-day holiday in Japan by using a series of delaying tactics. A censure vote against Abe failed at 3 p.m., which was followed by no-confidence motions and debate directed at Abe’s Cabinet late Friday night.

Even if the upper house had not passed the legislation, a second vote in the lower house would still have enacted the new measures. The bills passed the more powerful lower house in July, buoyed by the ruling coalition’s two-thirds majority.

The new laws allow Japan’s Self-Defense Forces to defend the country’s close allies in combat for the first time under its constitution, which renounces “war as a sovereign right of the nation and the threat or use of force as means of settling international disputes.”

The laws also allow SDF troops to defend weapons platforms of foreign countries contributing to Japan’s defense, while providing a standing legislative procedure for overseas troop deployments. Any use of force must be used only when there is no other option and to the minimum extent required, according to the new legal changes.

The legislation also broadens the support available from Japan to United States troops engaged elsewhere in combat, said Kenji Isezaki, professor of peace and conflict studies at the Tokyo University of Foreign Studies.

“The newly enacted permanent law enables SDF to provide not only water and fuel but ammunition as well,” Isezaki said. “The Self-Defense Force has now become a convenience store in the ocean.”

President Barack Obama and other U.S. officials have voiced support for changes aimed at allowing Japan to take a larger role in providing global security, even though a majority of the Japanese public oppose the change.

A Sept. 14 poll by the Asahi newspaper showed 54 percent against the bills, with 29 percent in favor and the remainder undecided. A majority also said that the bills did not need to be passed during the current legislative session, while 75 percent said that the issue had not received enough debate in the Diet.

The right to collective self-defense hadn’t been considered legal until Abe’s Cabinet signed off on a reinterpretation of the nation’s constitution last year.

Nevertheless, multiple scholars have testified before the Diet that only a constitutional amendment — which has never happened and would require more support than Abe’s government has right now — would make the new security legislation constitutional.

“Anyone who understands the basic principle of the constitution cannot help but oppose the legislation,” Aki Okusa, a leader of the Students Emergency Action for Liberal Democracies, told reporters Thursday, according to The Associated Press. “It’s ridiculous, and the bills’ legal questions have fueled the people’s anger.”

Okusa’s group joined tens of thousands of demonstrators who have surrounded the Diet building in protest during the past week.

The government has argued that the only Japan Supreme Court decision to rule on defense matters, the 1959 Sunagawa decision, grants the government broad powers to take measures that ensures the nation’s survival. Not defending a close ally, such as the United States, would endanger alliances and thus endanger Japan, according to the government’s position.

The road aheadIt remains unclear how Japan will use its newfound powers.

The government had sought authority to legally mount hostage rescue attempts, an issue that came to the forefront when al-Qaida-linked militants held Japanese and other civilians at a natural gas facility in Algeria in 2013. At least 39 hostages died, according to reports.

The new law doesn’t give SDF troops that authority, according to Isezaki’s viewpoint. They would be viewed no differently under Japanese law than city police officers firing weapons in a foreign country.

“Should any SDF servicemember kill someone by accident in a combat zone in a foreign country, he or she would face manslaughter charges in Japan,” said Isezaki, who testified before the diet in July in opposition to the new laws. “This remains unchanged.”

However, government sources maintained Friday that the new laws would allow SDF troops to protect civilians engaged in peacekeeping efforts aboard, and that the laws would give troops more leeway to use weapons during peacekeeping operations.

The new laws could spur Japan to sail farther from its home shores alongside the U.S., Australia and other allies.

The U.S. asserts freedom of navigation rights in the South China Sea, despite ambiguous claims by China to most of its waters and airspace. Japan’s interests may align, given China’s claim on Japanese-held territory in the East China Sea.

Abe stirred controversy in May when he mentioned that the new laws could be used to allow Japan to conduct minesweeping operations in the Strait of Hormuz, should Iran attempt to choke the flow of global oil supplies.

Opponents saw the comment as further proof that the new laws could get Japan entangled in foreign wars that do not directly threaten the nation.

On Monday, Abe and Cabinet officials said the Middle East remained an important region for Japan, but dismissed any impending minesweeping operations.

“Considering the current international circumstances, we are not expecting that (minesweeping) will become a real issue,” Abe told an upper House Diet committee on Monday.