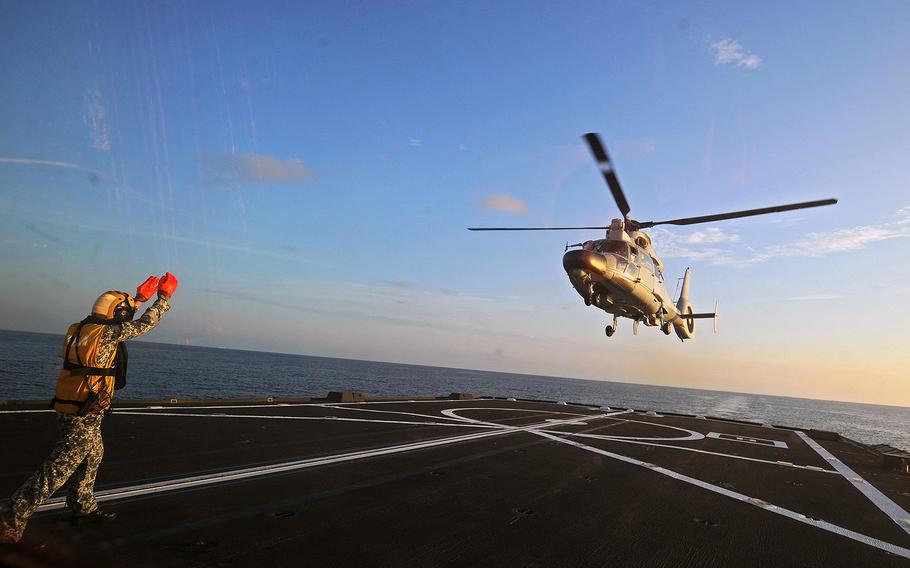 The 429-page document also comments on multiple conflicts affecting the international community, which reflects the ruling government’s repeated statements in favor of playing a larger role in global security affairs.

The document leads off with the most pressing regional concerns in recent years, devoting its first chapter to North Korea and its longest section to China.

“China, particularly over maritime issues, continues to act in an assertive manner, including coercive attempts at changing the status quo, and is poised to fulfill its unilateral demands without compromise,” according to the document.

In 2013, China unilaterally imposed an Air Defense Identification Zone over the Japan-administered Senkaku Islands, claimed by China as the Diaoyu Islands. U.S. and Japanese forces have largely disregarded China’s demands for flight plans within the identification zone. Chinese ships have also faced off with several other nations in the South China Sea, where the country has been building artificial islands capable of supporting military assets.

The Japanese Air Self-Defense force scrambled its jets 943 times last year, the second-highest figure in recent years, according to the report. Most were in response to Russian and Chinese aircraft approaching Japan’s territorial boundaries.

North Korea’s nuclear program represents a growing threat with time, as Japan faces the eventual possibility of “ballistic missiles mounted with nuclear warheads that include Japan in its range,” according to the report.

Japan and the United States agreed to closer cooperation on missile defense earlier this year as part of security guidelines that were revamped for the first time since 1997.

This year’s report also included an expanded section on the Middle East, and particularly on the Islamic State group.

“The white paper speaks about the danger of radicalized groups and how advanced countries are faced with a higher risk of terrorist incidents — and Japan is no exception,” a defense ministry spokesman told reporters at a background briefing.

Prime Minister Shinzo Abe talked about using Japanese forces to operate in the Middle East earlier this year while pushing forward legislation that would allow Japan to aid its allies in combat for the first time since WWII. The legislation has proved unpopular among Japanese concerned that it will involve the country in wars that pose no existential threat.

The plan is supported by the United States but bitterly opposed by Okinawa’s governor, who has explored ways to halt construction.