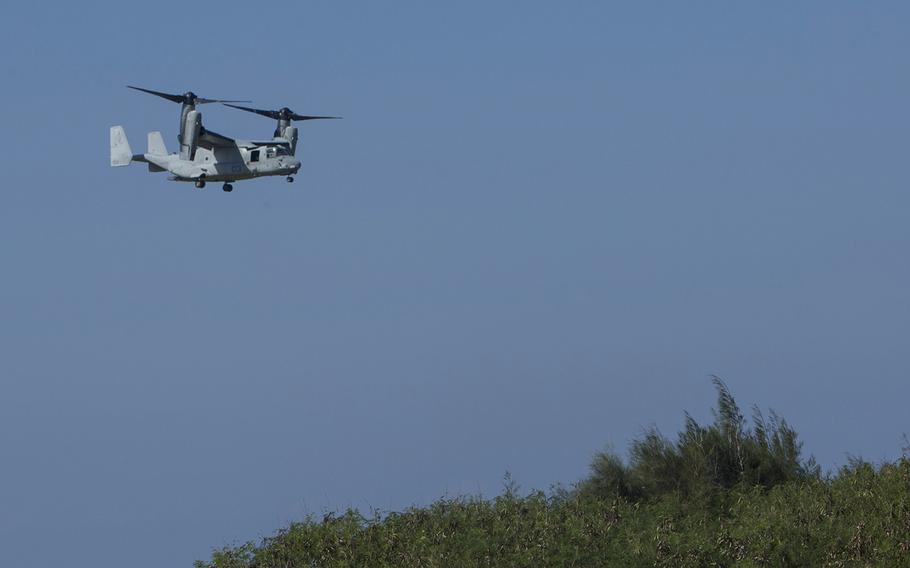 CAMP FOSTER, Okinawa — Japan Coast Guard officials have requested that prosecutors charge a Marine helicopter pilot found to be at fault in a 2016 MV-22 Osprey crash off Okinawa.

The charges were referred Tuesday to the Naha District Public Prosecutors Office by the Nakagusuku Coast Guard Office, a Coast Guard spokesman confirmed to Stars and Stripes on Wednesday.

Coast Guard officials requested that the unnamed Marine pilot be charged with negligence resulting in an aircraft crash under Japanese aviation law, which could bring three years in prison or up to $1,863 in fines.

Prosecutors declined to comment Wednesday when asked if they intend to charge the pilot.

The pilot’s name is not known because Marine officials have declined to provide it to Coast Guard officials, the Coast Guard spokesman said.

“We will examine the case thoroughly and make a decision,” a spokesman for the prosecutor’s office said Wednesday. The spokesman said not having the name of the servicemember does not necessarily doom any potential prosecution.

Coast Guard officials said they recently wrapped up their investigation into the incident. They declined to comment further.

In Japan, the Coast Guard serves in a maritime law enforcement capacity and is separate from the Ministry of Defense.

The status of forces agreement between the countries gives Japanese authorities jurisdiction to prosecute U.S. servicemembers “with respect to offenses committed within the territory of Japan and punishable by the law of Japan.”

However, the SOFA also waives certain claims of property damage and maritime salvage if “the vessel or cargo salved was owned by a Party and being used by its defense services for official purposes.”

Officials from Japan’s Foreign Ministry did not respond to requests seeking comment regarding the SOFA on Wednesday.

The crash occurred during nighttime aerial refueling on Dec. 13, 2016, after one of the helicopter-airplane hybrid’s propellers clipped a thick hose on an Air Force C-130 tanker, officials said at the time.

The pilot was able to limp 18 miles back to Okinawa but put the tilt-rotor aircraft down into the sea rather than fly over a residential area to reach Marine Corps Air Station Futenma.

Two of its five crewmembers were injured in the crash. The aircraft — assigned to Marine Aircraft Group 36, 1st Marine Aircraft Wing — was a total loss at approximately $90 million.

Osprey operations were temporarily suspended after the incident.

The crew was lauded by then-III Marine Expeditionary Force commander Lt. Gen. Lawrence Nicholson for risking their lives rather than flying over Okinawan homes en route to Futenma, though local opposition over the safety of the aircraft flared up.

Nicholson delivered the report regarding the incident to Okinawan officials on Sept. 11, 2017.

Responsibility for the crash was determined to rest solely with the pilot. Marine officials never commented on the pilot’s status or whether the pilot was punished.

The U.S. military took a series of preventative measures after the crash, from adding wake turbulence to flight simulators to education and instruction.