‘It feels good:’ Coronavirus vaccinations under way at US bases in Japan 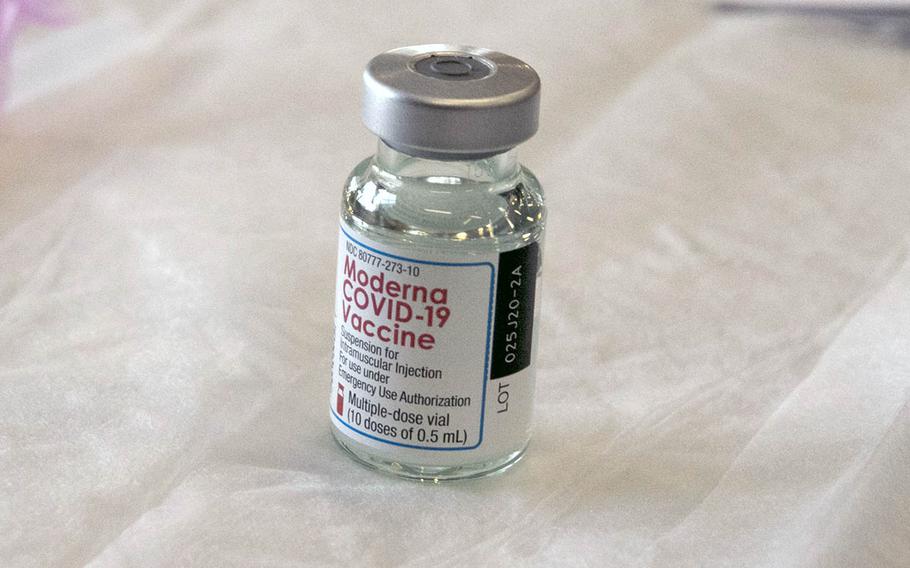 Buy Photo
The first vial of the Moderna vaccine to be administered at Kadena Air Base, Okinawa, Japan, was ready on Monday, Dec. 28, 2020. (Matthew M. Burke/Stars and Stripes)

Buy Photo
The first vial of the Moderna vaccine to be administered at Kadena Air Base, Okinawa, Japan, was ready on Monday, Dec. 28, 2020. (Matthew M. Burke/Stars and Stripes) 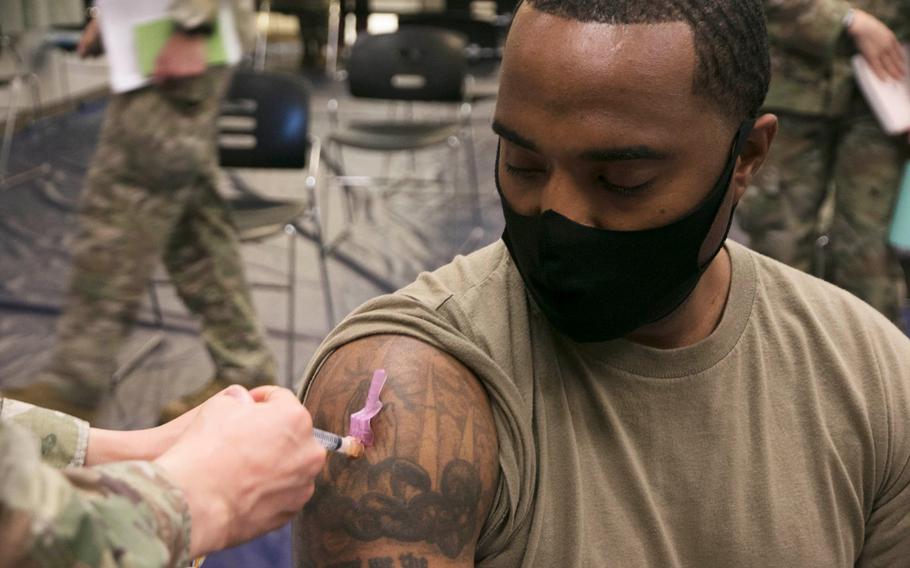 TOKYO — A year-long wait began to evaporate Monday as volunteers at U.S. military bases across Japan bared their arms for the first wave of inoculations of the Moderna vaccine against the coronavirus.

Health care professionals, security forces and emergency responders were first in line, the top of a three-phase plan by the Defense Department to get the vaccine to its personnel.

Clinics at Yokota Air Base, in western Tokyo, and Kadena Air Base, on Okinawa, were two of the installations administering the vaccine approved by the U.S. Food and Drug Administration on Dec. 18 for emergency use.

Yokota, headquarters of U.S. Forces Japan, along with Kadena and four other U.S. bases in Japan with medical facilities received the vaccine over the weekend, along with U.S. Forces Korea where inoculations are scheduled Tuesday.

“It feels like a flu shot, to be quite honest,” said Col. Jay Veeder, commander of the 18th Medical Group at Kadena. “Definitely not the worst immunization I’ve ever gotten. I’ve gotten some pretty gnarly ones. It’s not too bad.”

Veeder took his shot to a round of applause then waited 15 minutes for adverse reactions but experienced none.

The vaccine is one of two approved this month by the FDA to combat the virus, which was first reported a year ago in China and reached pandemic proportions within four months. Both vaccines require two shots separated by about a month. Subjects must volunteer for the jab because it's an emergency measure.

Leaders rolled up their sleeves to set the example for those expected to follow in coming months, said Capt. Alexander Tran, 29, of Denver, chief of in-patient pharmacy services for the 374th Medical Group at Yokota.

“We still want to make sure we are immunizing the first responders, the health care workers, public health personnel, to include our defenders,” Tran said. “But we are also showing that our leadership is on board and, hopefully, it’s a way to encourage our personnel.”

The Moderna vaccine in trials was 94% effective in preventing COVID-19, the respiratory disease caused by the coronavirus, according to the FDA.

The most common side effects are pain at the injection site, tiredness, headache, muscle pain, chills, joint pain, swollen lymph nodes, nausea and vomiting, and fever, according to the FDA. More people experienced them after the second dose than after the first.

The side effects mean the body is building a defense to the disease, according to the Yokota medical group.

“I want to emphasize that Moderna and Pfizer have done extensive work to make sure that the vaccine is safe for personnel,” Tran said.

In Japan, the Moderna vaccine arrived at Yokota and Kadena; at Yokosuka Naval Base, homeport south of Tokyo of the 7th Fleet; and Camp Zama, headquarters southwest of Tokyo of U.S. Army Japan; Naval Hospital Okinawa on Camp Foster, a Marine Corps base on Okinawa; and Misawa Air Base in northeastern Japan .

Spokespeople for Yokota and Kadena on Monday declined to say how many people had been vaccinated.

The military plans to vaccinate its uniformed and civilian personnel in three phases. The next phase includes individuals deploying outside the United States and “critical and essential support personnel;” followed by high-risk individuals and the general population, according to information on the Yokosuka Naval Hospital website.

At Kadena on Monday, one volunteer, Master Sgt. Robert Snowden, expressed relief after he received the 0.5 milliliter injection.

“It lets you know there is light at the end of the tunnel,” he said. “We’re getting close to the end and it feels good.”