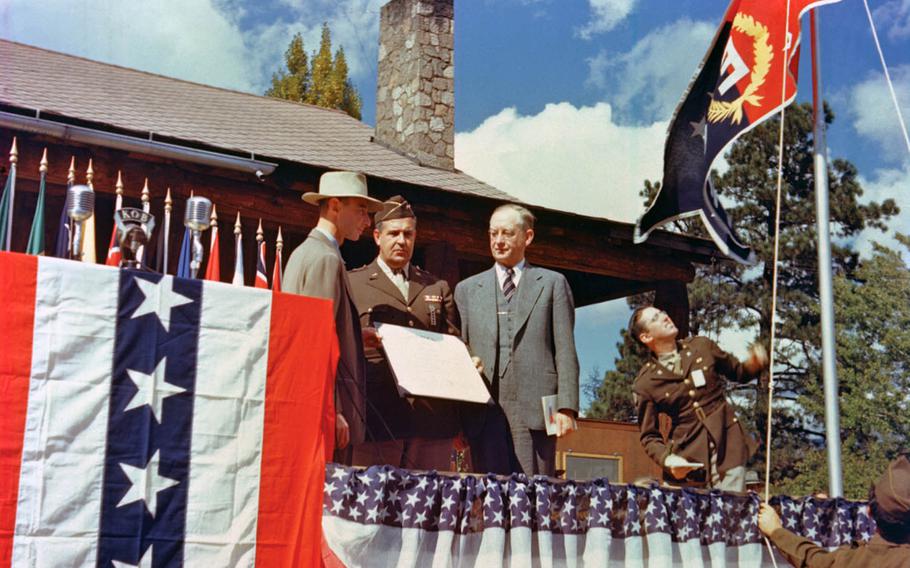 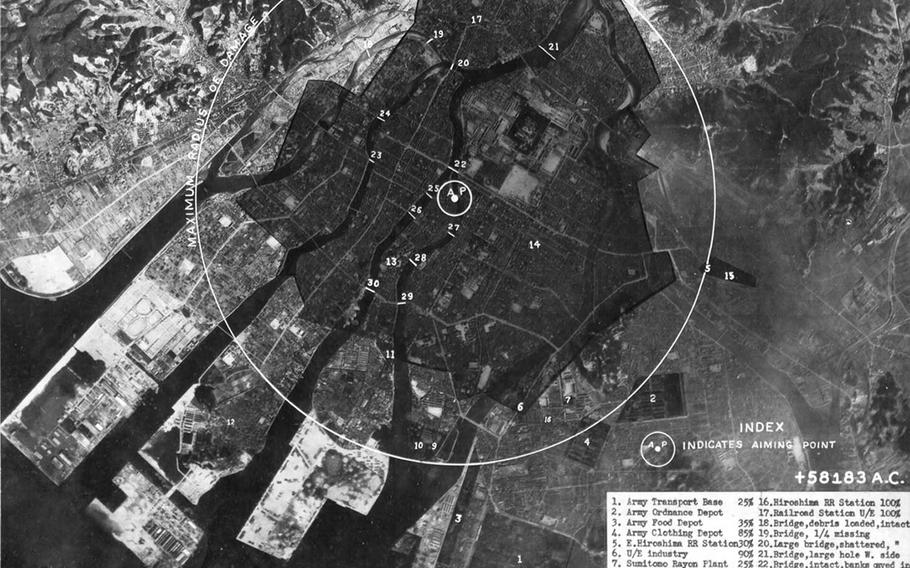 A photograph of damage done to Hiroshima, Japan, on Aug. 6, 1945, and delivered Aug. 8, 1945, to President Harry Truman as part of the first report of the effects of the atomic bomb. (National Archives and Records Administration) 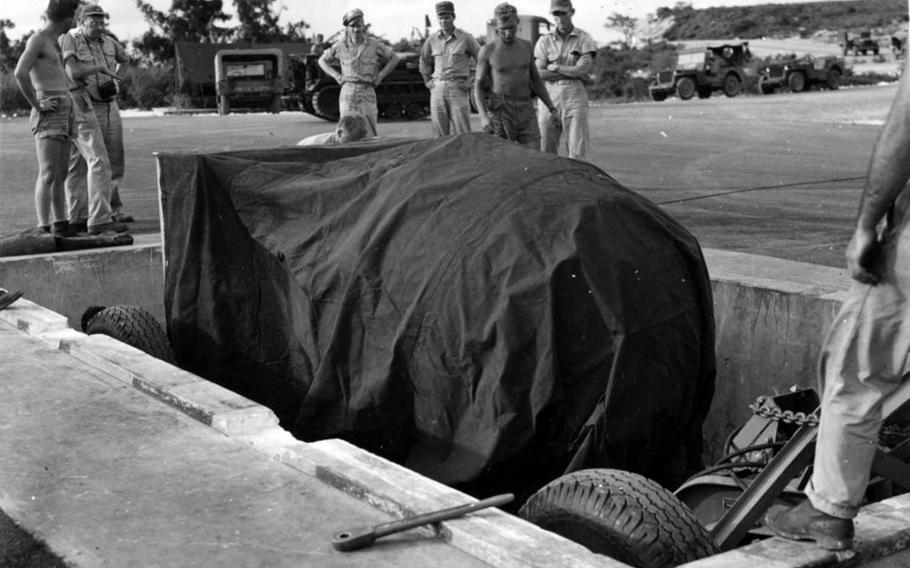 U.S. soldiers on Tinian prepare to load the Fat Man bomb for the atomic bombing mission to Nagasaki, Japan, on Aug. 9, 1945. (National Archives and Records Administration) 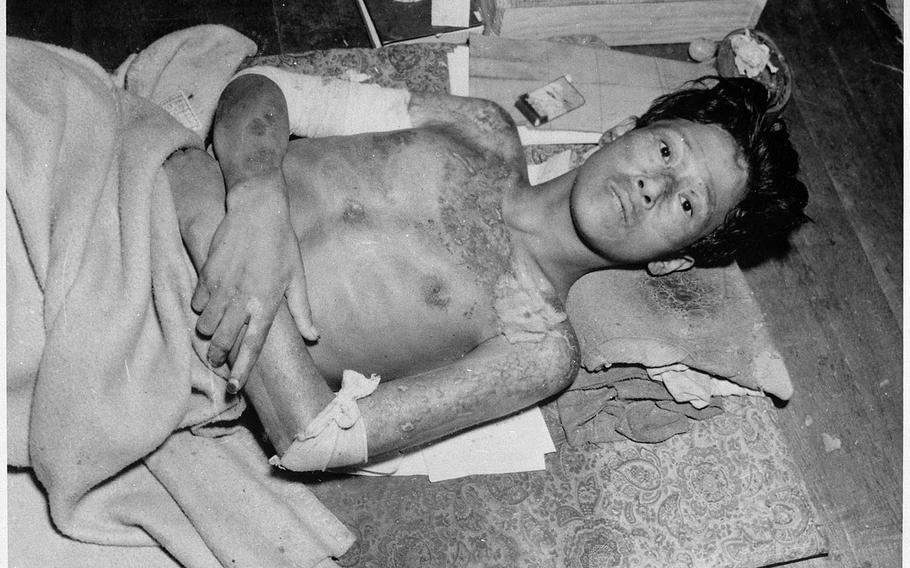 A survivor of the atomic bombing of Nagasaki, Japan, photographed after the attack Aug. 9, 1945. (National Archives and Records Administration) 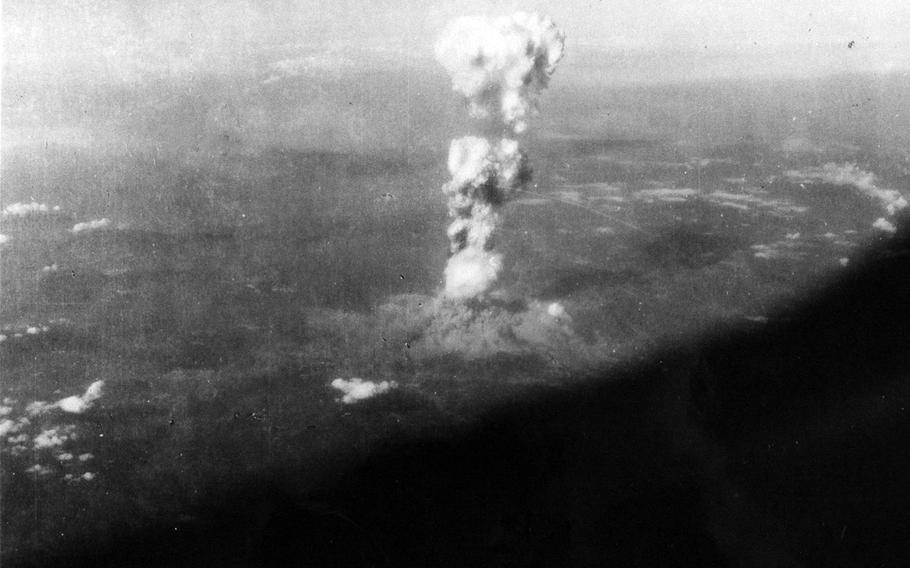 This photograph discovered by Hiroshima Peace Memorial Museum officials at the Library of Congress in 2016 is believed to have been taken from the B-29 bomber Enola Gay after it dropped the world's first atomic bomb on Hiroshima, Japan, Aug. 6, 1945. (Library of Congress Archives) 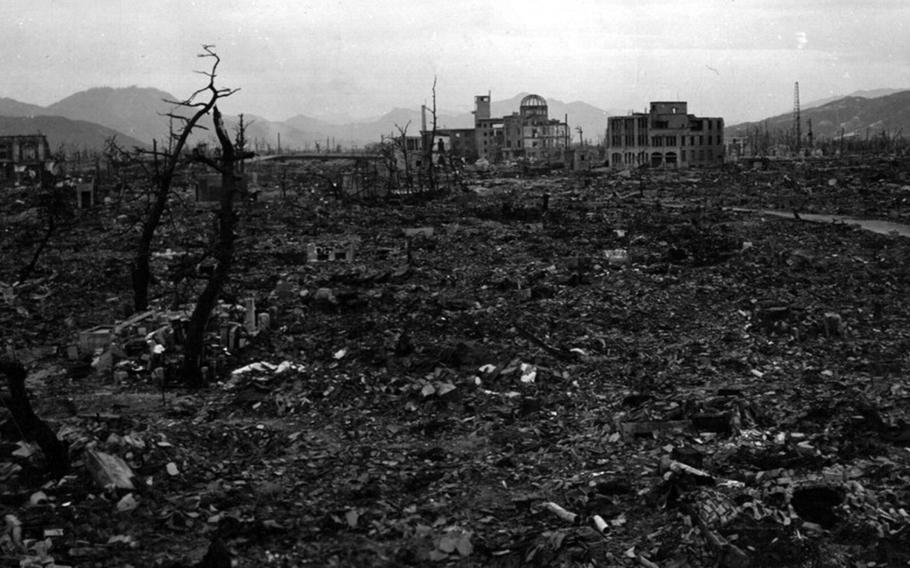 This photograph taken several months after an atomic bomb was dropped on Hiroshima, Japan, on Aug. 6, 1945, shows the utter decimation of the city. (U.S. National Archives)

TOKYO — In spring and summer 1945, American politicians, generals and scientists pondered how to best use the terrible power of the atomic bomb created by the Manhattan Project in New Mexico.

They deliberated killing tens of thousands of civilians to end the war with Japan, attacks finally carried out on the president’s authority.

It’s been 75 years since the U.S. Army Air Force dropped atomic bombs on Hiroshima and Nagasaki on Aug. 6 and 9, 1945, respectively. Both cities were basically leveled, and hundreds of thousands of people were killed or injured.

After Nagasaki, the Japanese realized further resistance was futile. They surrendered, but only on the condition that the emperor retain his throne.

The battleship USS Missouri steamed into Tokyo Harbor, the surrender documents were signed, Gen. Douglas MacArthur called it good and the rest is history.

Alex Wellerstein, a historian of science at the Stevens Institute of Technology in Hoboken, N.J., author and blogger on atomic bomb history, said time has smoothed the wrinkles and simplified the facts that are often taught about the first and, so far, only wartime use of atomic weapons.

“The difficulty of these sort of simple ways of understanding it, or these ways of framing it, the first one is just not historically how people thought about it at the time,” Wellerstein said in a phone interview July 10. “It wasn’t seen as this big deliberation, this big debate. That’s a later framing of it that was put on in order to justify having used the bombs.”

Within the population that day in Hiroshima, site of a military depot, were 31,000 Japanese troops, thousands of Korean forced laborers fortifying the city and a handful of U.S. prisoners of war, said Alan Carr, the official historian at Los Alamos National Laboratory in Los Alamos, N.M., where the bomb was designed and built.

The bomb fell near the city center, where the bombardier aboard the B-29 Superfortress Enola Gay, Maj. Thomas Ferebee, had aimed it. At Nagasaki, however, the bomb fell wide of its intended mark and detonated over the Mitsubishi Nagasaki Arms Factory where, Carr said, the torpedoes employed at Pearl Harbor were likely manufactured.

No brainer Those losses hastened the war’s conclusion but were not solely responsible for it, both Wellerstein and Carr said. Likewise, other misconceptions form a familiar story surrounding the bombings.

For example, Wellerstein said, not much deliberation went into using the bomb. Other historians hold the same view, including Carr. He cited a paper by historian Barton Bernstein, a Stanford University professor, from 2005.

“He said it wasn’t a decision so much as the implementation of an assumption,” Carr said by phone from Los Alamos on July 16. “And I really do think that was the case, looking back on this.”

The scale and momentum of the war dictated using the bombs, Carr said. Every day, hundreds of Americans died in combat. Every 500-plane raid launched by U.S. Army Air Forces over Tokyo put hundreds of airmen in harm’s way. During peak fighting on the Eastern Front, tens of thousands of Soviet troops and civilians died daily. And thousands of Americans were expected to die in an invasion of the Japanese homeland, planning for which went on despite the atomic bombings.

“All of sudden you have what is essentially an irresistible weapon. There is no countermeasure for a nuclear bomb. One plane out of nowhere could destroy a city in a moment,” Carr said. “These were weapons that were made to go into combat and serve a purpose and I think that’s what happened.”

“It’s not clear,” he said. “There’s a lot of stuff going on at the end of World War II and the atomic bombs are part of that. Most people don’t realize that there’s a lot more complexity.”

Actually, the Allies broached the Soviets’ entry into the Pacific war in 1943; the Soviets agreed at the Yalta Conference in February 1945.

“We wanted them in the Pacific just as they wanted us to invade France leading up to D-Day to produce a multi-front war,” Carr said.

Japan’s leaders were stunned by the Soviet declaration. They had a non-aggression pact with the Russians and through them were trying to reach terms for an acceptable peace with the Allies.

The U.S. and its partners threw everything they had at Japan, who clung to the idea of a negotiated peace, Carr said. Bringing the Soviets aboard was part of the Allies’ plan, even though Truman distrusted Stalin, he said.

Atop its losses from the atomic bombings, the Japanese suffered as many as 84,000 killed in the short Manchurian campaign against the Russians.

The Soviet entry into the war was a crushing blow to the Japanese, who at that stage were looking for a way out, Carr said.

The Japanese effectively lost the war the day the Imperial Navy struck Pearl Harbor, he said. They had hoped to knock the U.S. to its knees decisively with one strike but failed to do so. Their subsequent defensive campaign in the Pacific yielded few victories and a steady retreat.

Although the Hiroshima bombing was closely tracked, history suggests Nagasaki proceeded almost automatically, without explicit presidential authority, Wellerstein said. He has examined the historical record looking for the sequence of events leading to the Nagasaki bombing.

“Truman is given all sorts of updates on the first one, he is interested in that, they tell him the day before the mission is going on the next day,” Wellerstein said. “Nobody tells him about the second bomb.”

He said the Nagasaki order passed between generals, along with information on additional bombs becoming available for more targets. “It’s a sort of a blank check sort of order,” he said.

“The decision to use the second bomb, that was made by military people,” he said. “Not with any consultation with Truman at all.”

Once Gen. Leslie Groves, who ran the Manhattan Project, updated Truman after Nagasaki, the president put a halt to further bombing. With that, he regained control of atomic weapons, Wellerstein said.

“He basically said you can’t use atomic bombs without my explicit permission,” he said. “You cannot just keep dropping them as soon as they’re available.”

Another notion holds that Japan, after two atomic attacks, surrendered only on condition that Emperor Hirohito retain his throne. Nothing in the historical record suggests that was true, Carr said.

“I’ve seen it repeated often in history books. I’ve asked folks like [Wellerstein] but I’ve not found anybody yet who can produce the document for me,” Carr said.

The final telegram between the warring sides, Carr said, went something like this: The Japanese said they’re ready to quit but let us keep the emperor; the U.S. reply ignored the request and said that upon surrender the emperor’s authority transfers to a U.S. military governor.

“But I’ve seen nothing that guaranteed the emperor’s position,” either overtly or implied, he said.

‘Easy moralizing’ After the fact, some Manhattan Project scientists voiced reservations about using the atomic bombs, saying it wasn’t necessary, Wellerstein said. “So interestingly, it isn’t like the bombs were used and were credited by many with ending the war and that made the people opposed think it was a good idea.”

The destruction of two Japanese cities in 1945 created its own version of American history, “and what it means to be American,” he said. The Manhattan Project also gave rise to a belief that technological superiority will win the day, which proved false in subsequent conflicts, he said.

“It doesn’t boil down to easy moralizing or arguments for or against the atomic bombs,” Wellerstein said.

“Separately, and the more deeper question, this question of what are you allowed to do in war if you believe your cause is right?” Wellerstein said. “How much civilian loss are you willing to tolerate if it’s going to get you the victory that you want?”