In Harris, White House finds diplomat who can ‘imagine the unimaginable’ with N. Korea 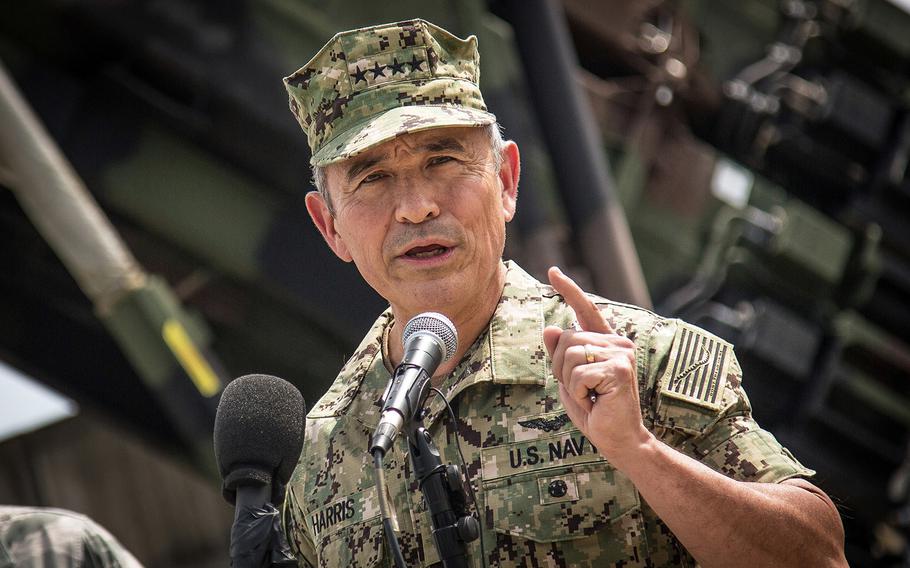 But his job as top Pacific commander is to ensure such diplomacy is backed by “credible military power,” he told the Chamber of Commerce group.

“Many people have talked about military options being unimaginable regarding North Korea,” said Harris, who is set to retire in May and until earlier this week had been nominated to become ambassador to Australia.

“Folks, I must imagine the unimaginable. And what is unimaginable to me are North Korean nuclear-tipped missiles delivered here in Honolulu, or in Los Angeles, or in New York or Washington, D.C.,” he said.

In the recent surprise revelation that the White House had switched Harris’ nomination instead to ambassadorship to South Korea, the Trump administration is availing itself of a nominee who has made peace with the possibility of all-out war with North Korea.

That move comports with the hawkish outlook of Mike Pompeo, who was confirmed as secretary of state Friday and reportedly instigated the nomination swap. In a secretive trip to North Korea earlier this month, Pompeo met with Kim Jong Un, presumably to discuss a possible summit between the North Korean leader and President Donald Trump.

In January, the Trump administration dropped Victor Cha – a former foreign policy adviser to President George W. Bush – as its choice for South Korea ambassador. Cha has said he was dumped because he disagreed with the White House on the possible use of a pre-emptive military strike against North Korea.

“I think it’s fair to say it’s significant that they chose someone with a military background,” said Denny Roy, an Asia security expert at the East-West Center, Honolulu. “That would seem to support the idea that if need be they are willing to resort to a military solution.”

On the other hand, the choice could be an attempt at “orchestrated psychological warfare” aimed at North Korea, he said. “Behind closed doors they might be just as opposed to a pre-emptive strike as anyone else.”

“Harris is a politically astute foreign policy hawk and has been at the center of U.S. Asia strategy for years now as commander of PACOM,” said Van Jackson, a senior lecturer in international relations at Victoria University in New Zealand who is writing a book about Trump’s nuclear standoff with Kim.

Some sources Jackson interviewed for the book “have mentioned Harris' preference not only for maximum pressure on North Korea, but for preventive strikes – the so-called ‘bloody nose option,’” he said. “I think that makes him very much simpatico with Pompeo, Trump and [National Security Adviser John] Bolton, which should, perversely, add to his credibility should he be named ambassador to South Korea.”

In the frequent speeches Harris has made at think tanks, ceremonies and conferences since becoming PACOM commander in May 2015, he has generally toed the White House line when it comes to North Korea.

In his Chamber of Commerce speech, Harris cited the priority of then-Secretary of State Rex Tillerson and Secretary of Defense James Mattis to maintain diplomacy as “our main battery.”

“Joined by many in the international community, the United States is applying diplomatic and economic pressure on North Korea to achieve the complete, verifiable and irreversible denuclearization of the Korean Peninsula and a dismantling of the regime's ballistic missile programs,” he said.

But his sharp criticisms of China frequently contrasted with President Barack Obama’s measured and even conciliatory approach to China’s growing naval assertiveness in the Pacific.

He was among the first officials in 2015 to decry China’s effort to build artificial islands in the disputed areas of the South China Sea, upon which it constructed runways and infrastructure that could be used for military purposes. At the ceremony where he took command of PACOM, Harris called China’s claims of sovereignty over most of the South China Sea “preposterous.”

U.S. Pacific Fleet began conducting “freedom of navigation” operations near the disputed islands, but media reports that cited unidentified sources said Harris had been unable to convince the White House to carry them out more forcefully and more often.

Carl Baker, an Asia expert at the think tank Pacific Forum CSIS in Honolulu, said that while it is true senior military officers such as Harris will by training look for military answers to problems, they also have “unique and very personal insights into the costs associated with military solutions.”

He sees Harris’ greatest challenge as making the actual transition from military commander to consummate diplomat.

“Simply put, the U.S. has a four-star general in Korea to deal with military issues,” Baker said, referring to Gen. Vincent Brooks, commander of U.S. Forces Korea. “The ambassador needs to be able to provide balance by ensuring broader U.S. interests are also addressed. For a recently retired admiral, that could represent a steep learning curve.”

The presence of Brooks has also left Harris less “well versed” on Korea issues than he is in other Pacific strategic matters, Jackson said.

“Because Korea has its own local U.S. four-star general, PACOM has historically been a bit laissez-faire when it comes to Korea policy and ops, and the overwhelming priority during most of Harris's time at PACOM was the South China Sea, not North Korea,” Jackson said.

A career military officer possesses “a certain realism, or even pessimism, in the way they look at things,” Roy said. “They think seriously about the worst-case scenario.”

Harris appears to have done a great deal of such thinking.

In 2016, he began issuing a rotating list of books and movies intended as suggestions to personnel under his command for developing professionally.

Leading the current list of nonfiction books is “The General versus the President: MacArthur and Truman at the Brink of Nuclear War,” which Harris describes as “insight into the tumultuous relationship between the President and his iconic general.”

Next on the list is “The Impossible State: North Korea, Past and Future,” written by Victor Cha.