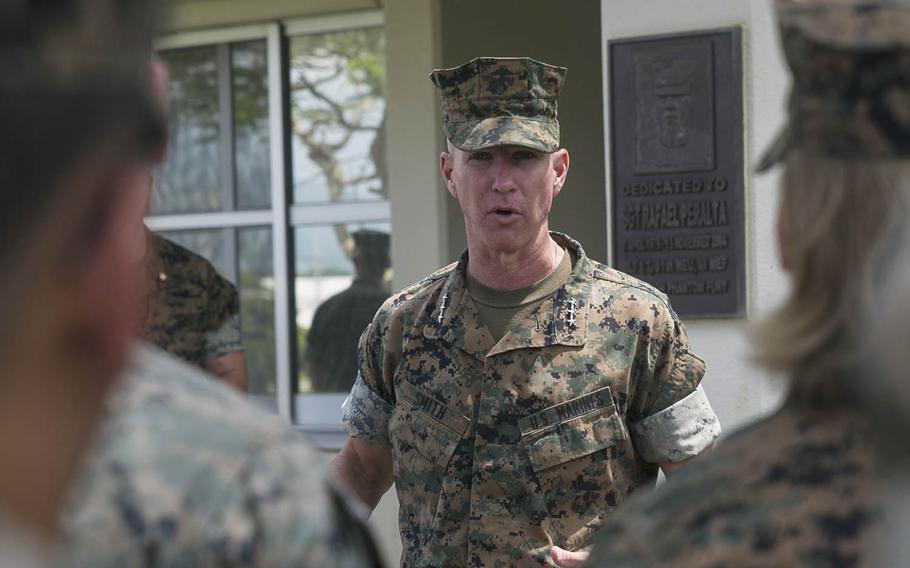 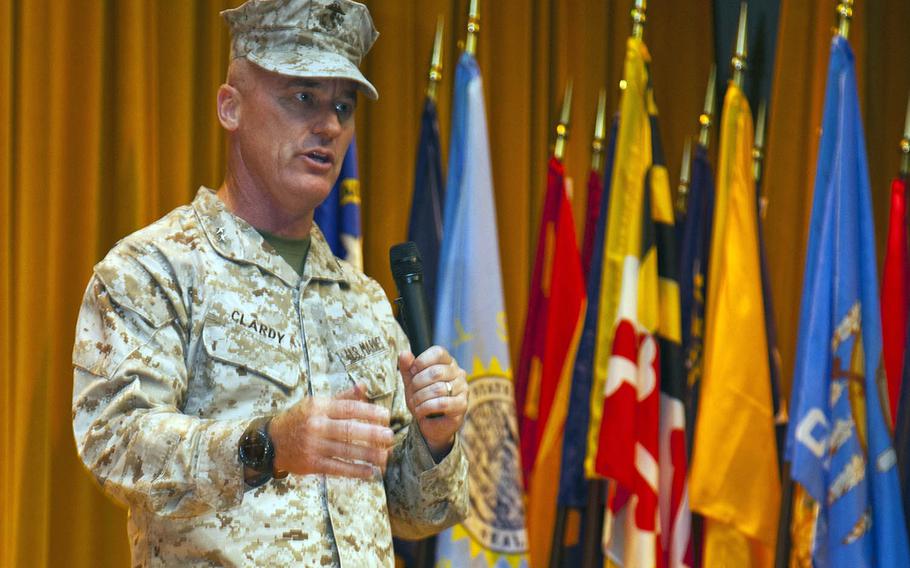 Lt. Gen. Eric Smith was nominated by President Donald Trump last week to serve as deputy commandant for combat development and integration, as well as command general for Marine Corps Combat Development Command at Marine Corps headquarters in Washington, D.C., according to a Defense Department statement released last week. The announcement was made by acting Secretary of Defense Pat Shanahan.

Smith’s replacement will be the current military deputy to the undersecretary of defense for personnel and readiness, Lt. Gen. H. Stacy Clardy III, a subsequent statement said.

It remains unclear when the transition will take place.

Smith’s eight-month tenure is remarkably short for the top Marine in Japan. He took over III MEF from Lt. Gen. Lawrence Nicholson on Aug. 2. Terms of service in the post have generally been around two to three years.

Marine officials on Okinawa referred Stars and Stripes to Manpower and Reserve Affairs for comment. It did not reply by Wednesday afternoon Japan time.

The move comes at a delicate time for the U.S. military and Marine Corps on Okinawa.

The bodies of Navy Petty Officer 3rd Class Gabriel Olivero, 32, of North Carolina, and Tamae Hindman, 44, of Okinawa, were found Saturday at Hindman’s apartment in the Kuwae district of Chatan. Okinawa police allege Olivero — a Navy corpsman attached to the 3rd Marine Division — stabbed Hindman to death before taking his own life.

Olivero had a history of stalking and domestic violence directed toward Hindman and had violated a U.S. military protective order when he apparently committed the homicide, according to a III MEF spokesman.

In response to the slaying, Smith called Okinawa Gov. Denny Tamaki and offered his condolences, officials from Tamaki’s office said. He then met him at the prefectural offices and took responsibility for the slaying.

Clardy is no stranger to the complex environment and challenges presented by the command on Okinawa. He served as 3rd Marine Division commander from July 2013 to June 2015.

Clardy was commissioned in 1983 after graduating from the University of South Carolina, his Defense Department biography states.

Prior to the undersecretary’s office, Clardy was J8 deputy director for force management, application and support on the Joint Staff, his biography said. He holds two master’s degrees.

In November, he loosened liberty restrictions for Marines ranked sergeant and below by providing an extra hour of liberty time from midnight to 1 a.m. He also relaxed liberty buddy requirements and made it easier for younger Marines to drive on the island.

News of the slaying-suicide caught the island by surprise over the weekend. In a letter dated Sunday, Smith asked all U.S. servicemembers on Okinawa to keep a low profile to show respect to a community in mourning.

Stars and Stripes reporter Aya Ichihashi and The Associated Press contributed to this report.