Buy Photo
The coronavirus pandemic is being immortalized in a colorful array of unofficial military patches and challenge coins. (Seth Robson/Stars and Stripes) 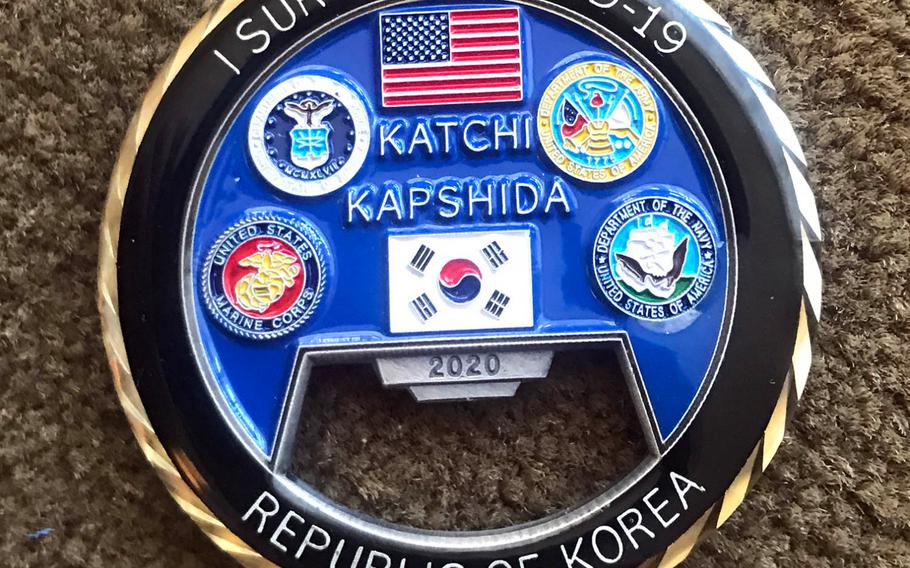 Buy Photo
This challenge coin features the U.S. and South Korean flags, along with the phrases "Katshi Kapshida"(Go Together) and "I Survived COVID-19." (Seth Robson/Stars and Stripes) 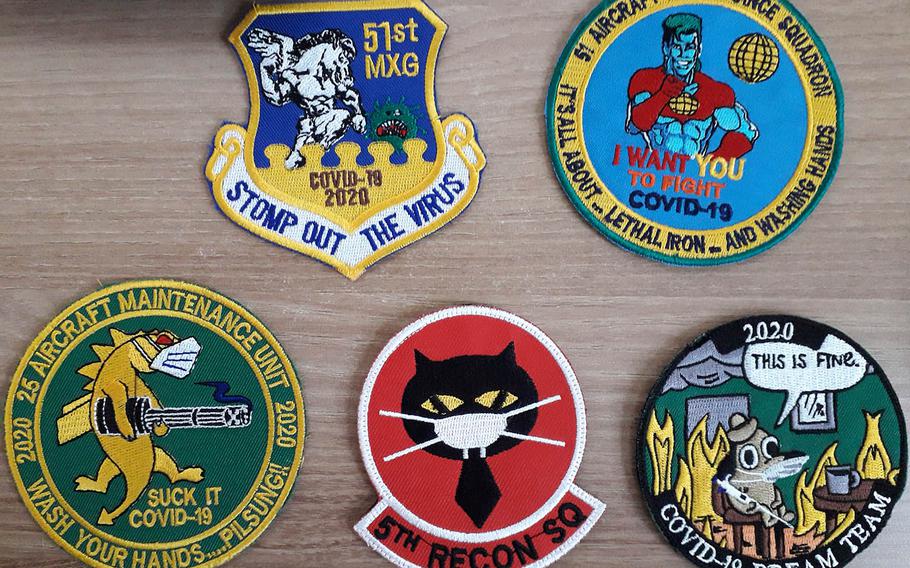 The coronavirus pandemic is being immortalized in a colorful array of unofficial military patches and challenge coins. (Cord Scott)

The coronavirus pandemic is being immortalized in a colorful array of unofficial military patches and challenge coins sold near U.S. bases in South Korea.

Some patches display biohazard symbols or virus clusters, one shows a bottle of beer named “Covid 19 Extra” and many feature logos for military units stationed on the peninsula.

One challenge coin – tokens often handed out by commanders to recognize troops’ good work – features the U.S. and South Korean flags, along with the phrases “Katshi Kapshida” (Go Together) and “I Survived COVID-19.”

Over the past year in South Korea, 500 U.S. service members contracted COVID-19, the potentially fatal respiratory disease caused by the coronavirus. Most tested positive after they stepped off an airplane from the United States.

Air Force rules about dress and appearance provided by public affairs officials Friday state that morale patches are not authorized on uniforms.

However, unofficial patches have been sold at bazaars on bases in Iraq and Afghanistan in recent decades and deployed troops have been known to wear them on the battlefield. For example, a U.S. soldier supporting Iraqi troops during the Battle of Mosul in November 2016 was spotted wearing a “Hippie Killer” patch on his helmet.

The Velcro era means it’s easy to swap out patches, said Cord Scott, a professor of history, government and film for the University of Maryland Global Campus – Asia, who is based in South Korea.

“I know that some units are trying to get away from things like the Punisher patches (which depict a skull) but for the COVID patches these are things you might see on a backpack rather than on uniforms,” he said in a telephone interview Thursday.

The pandemic patches are a time marker, Cord added.

“You’re showing you were in a specific unit at a specific time and went through something,” he said.

In Japan, for example, challenge coins were used to commemorate Operation Tomodachi, the U.S. military relief effort following the 2011 Tohoku earthquake and tsunami. Coins featuring images of President Donald Trump and North Korean leader Kim Jong Un were minted in South Korea in 2018 in anticipation of one of their meetings.

“Then you throw the coronavirus pandemic on top of it,” said Cord, who said he has his own stash of patches and recently sent some to the Pritzker Military Museum & Library in Chicago.

The coronavirus patches will likely be displayed in museums years from now, he said.

“The patches and coins are also significant as they reflect a time which 100 years from now may not be politically correct or understood without context,” he said.