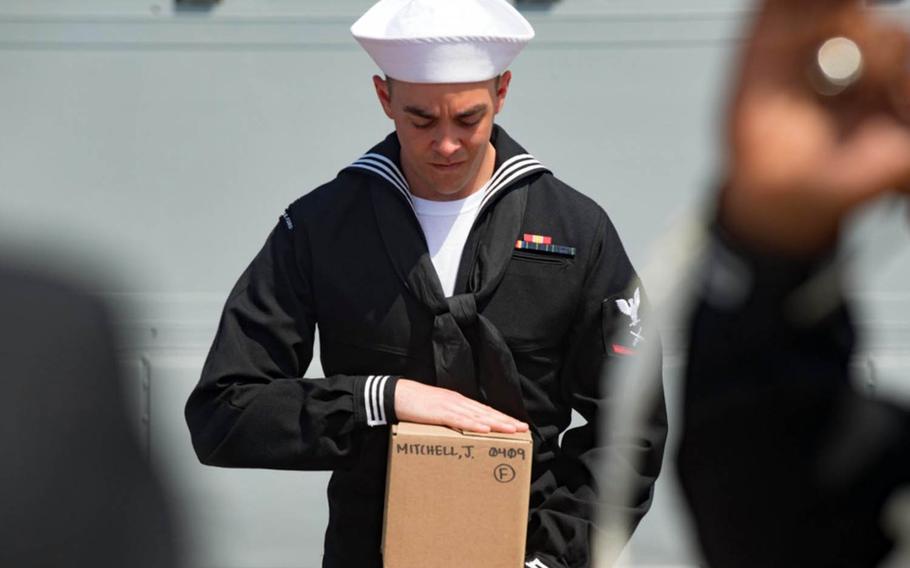 For one family, a burial-at-sea ceremony brought its Navy legacy full circle recently in the Mediterranean.

Gunner’s Mate 3rd Class Robert Ashman spotted a familiar name last month when scrolling through a list of those to be buried at sea from his ship, the destroyer USS Winston S. Churchill.

“I saw the name ‘James Mitchell,’ and I thought it was a coincidence,” he said, according to a Navy statement. “Then I saw his rate was the same as my great-grandfather — chief signalman — and shortly after my dad messaged me and confirmed they were really his ashes.”

Ashman joined the Navy in February 2015, following in the footsteps of his father, grandfather and great-grandfather. When he deployed with the Churchill last month, he had not been told that his great-grandfather’s remains would be aboard, as well.

“The Navy became a tradition in my family when my father joined and became a third-generation Sailor,” he said in the statement. “I knew I wanted to continue that from pretty early on.”

Ashman was asked to take part in the April 23 ceremony in the Mediterranean Sea, and he agreed — saying it felt like the right thing to do, the Navy said.

He stood on the flight deck with his great-grandfather’s urn in his hand at the end of a long, red carpet lined with sailors in their dress blues. The Churchill’s chaplain stood across from him and waited to receive the remains to commit them to sea.

The ship’s bell struck twice before the master of ceremonies announced the words, “Chief Signalman James Mitchell, departing,” the Navy statement said. As the boatswain’s mate began the traditional pipe-whistle call, Ashman walked down the carpet with the urn as sailors saluted on both sides.

Ashman “stood at attention and watched as the chaplain took the remains, now covered in an American flag, and deposited them in the calm Mediterranean water,” the statement said.

Ashman said having the rare opportunity to participate in his great-grandfather’s sea burial was an honor he never expected.

“I loved my great grandfather to the moon and back,” he said. “It was a huge coincidence that I ended up going on deployment on the same ship that was carrying his remains, and in a way it felt like it was meant to be.”