Hours ahead of Trump’s DMZ visit, still unclear if N. Korean leader will join him An up-close view of North Korean mountains, lake and coastline from South Korea's Mount Kumgang Observatory on Friday, June 14, 2019, after a hike on the Goseong DMZ Peace Trail, which was recently opened to civilians in the northeastern part of the heavily fortified border area. (Kim Gamel/Stars and Stripes)

An up-close view of North Korean mountains, lake and coastline from South Korea's Mount Kumgang Observatory on Friday, June 14, 2019, after a hike on the Goseong DMZ Peace Trail, which was recently opened to civilians in the northeastern part of the heavily fortified border area. (Kim Gamel/Stars and Stripes) 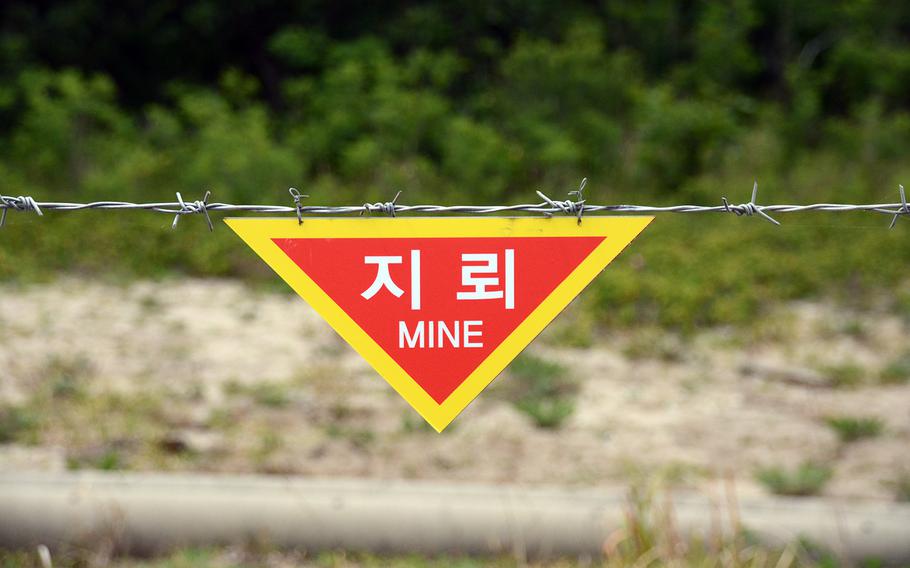 A sign warns of mines, a reminder of the dangers for hikers on the Goseong DMZ Peace Trail, which was recently opened to civilian hikers in the northeastern part of the heavily fortified border area. About 20 South Koreans participated in a hike on Friday, June 14, 2019. (Kim Gamel/Stars and Stripes)

SEOUL, South Korea – President Donald Trump expressed excitement about his first trip to the Demilitarized Zone in a tweet Sunday morning, but it remained unknown if the North Korean leader would join him.

Trump offered to meet Kim Jong Un in the heavily fortified border that divides the peninsula in a tweet on Saturday. North Korea called it a “very interesting suggestion” but made no immediate commitment.

The president also planned to meet with South Korean President Moon Jae-in as well as American troops before wrapping up his two-day trip to the staunch U.S. ally.

“Today I will visit with, and speak to, our Troops – and also go to the DMZ (long planned),” he said in Sunday’s tweet, which did not mention the North Korea leader.

It will be his first trip to the DMZ, a 2.5-mile wide, 155-mile long buffer zone that has bisected the peninsula since the 1950-53 Korean War ended in an armistice instead of a peace treaty.

Trump tried to go to the area during his previous visit to South Korea in 2017, but his helicopter was turned back because of bad weather.

The stakes are high as the U.S. administration has been seeking to break a deadlock in talks with the North over its banned nuclear weapons program.

Moon, who is eager to forge peace with the North, was hedging his bets.

He told Trump during a dinner on Saturday that a DMZ meeting with Kim would be a “historic event,” according to the Reuters news agency.

But the South Korean leader reportedly noted that even if it doesn’t occur the offer would have a “significant outcome” because it was a show of sincerity to Kim.

Communication between the two sides reached a peak last year but has stalled since the second summit between Trump and Kim ended without agreement in February.

Trump and Kim have insisted they maintain a good relationship and the president tried to tap into that in his tweet on Saturday.

He mentioned his trip to South Korea and said: “While there, if Chairman Kim of North Korea sees this, I would meet him at the Border/DMZ just to shake his hand and say Hello (?)!”

North Korea issued a fast response that appeared positive but made no immediate commitment.

“We see it as a very interesting suggestion, but we have not received an official proposal in this regard,” Choe Son Hui, the North’s first vice foreign minister, was quoted as saying by the state-run Korean Central News Agency.

She said that such a meeting, if it takes place, “would serve as another meaningful occasion in further deepening the personal relations between the two leaders and advancing the bilateral relations.”

The meet-and-greet would come just over a year after Trump and Kim first met in a historic summit on June 12, 2018, in Singapore, where they agreed to the general principle of working toward the total denuclearization of the Korean Peninsula.

Experts cautioned that another hastily arranged meeting between the two leaders would do little to resolve the wide gap over how to approach negotiations.

“If this Trump-Kim meet-up is going to happen, there are two things Trump can do to make it meaningful beyond a photo op or a reality TV moment,” Suzanne DiMaggio of the Carnegie Endowment wrote.

The president should voice support for efforts to improve inter-Korea relations and cross-border business ventures, which have become a casualty of the faltering U.S-North Korean talks, she said.

“Then, Trump should inform Kim that he has instructed his lead negotiator Steve Biegun to stay on after he leaves to meet his counterpart … and work out a plan to re-start bilateral discussions,” she added.

Trump elaborated on Saturday’s invitation in later remarks to reporters, saying he would “feel very comfortable” crossing the border into North Korea if Kim shows up.

“All I did is put out a feeler,” he said, claiming he had “just thought of it this morning.”

Some 28,500 U.S. servicemembers are stationed in South Korea, which remains technically at war with the North since their 1950-53 conflict ended in an armistice instead of a peace treaty.