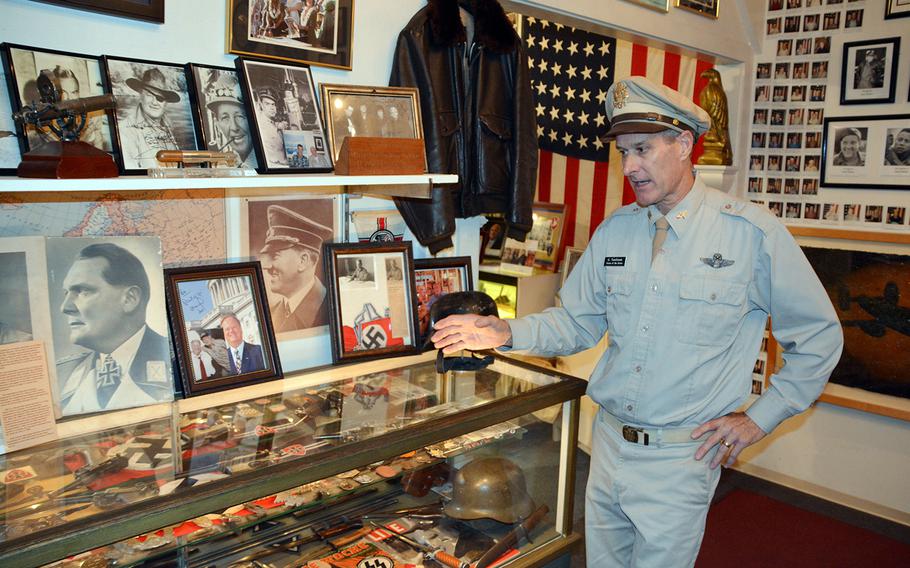 Buy Photo
Glen Tomlinson, owner of the Home of the Brave Museum in Honolulu, talks about a collection of World War II Nazi artifacts donated over the years by American war veterans, Oct. 27, 2017. (Wyatt Olson/Stars and Stripes)

Buy Photo
Glen Tomlinson, owner of the Home of the Brave Museum in Honolulu, talks about a collection of World War II Nazi artifacts donated over the years by American war veterans, Oct. 27, 2017. (Wyatt Olson/Stars and Stripes) A Red Cross flag and other World War II-era medical supplies are being auctioned from the extensive military collection of the Home of the Brave museum in Honolulu. (Oahu Auctions) A full World War II-era Army Air Corps uniform, complete with insignia, shirt, pants, tie and hat, is among the uniforms being auctioned from the collection of the Home of the Brave museum in Honolulu. (Oahu Auctions) 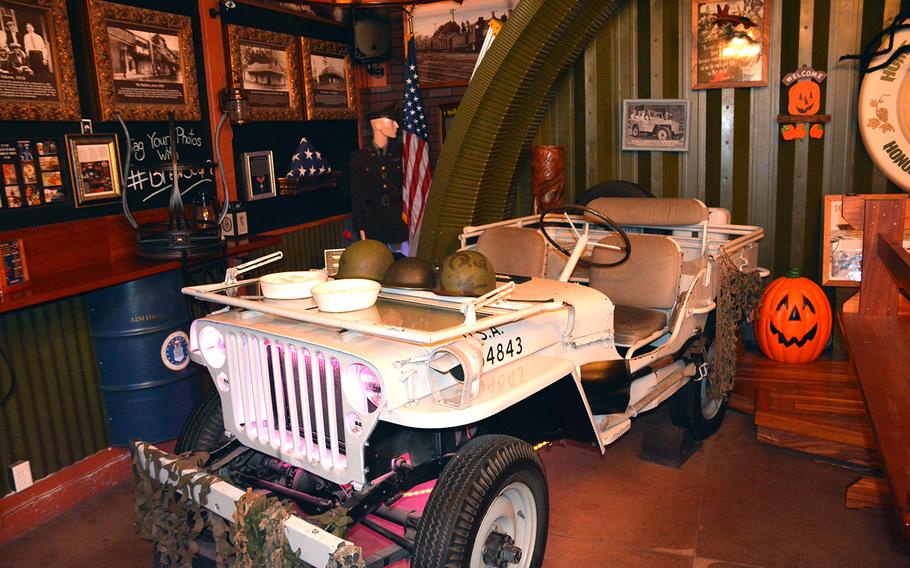 Buy Photo
This 1942 Willys Jeep, which has no engine or transmission, was centerpiece decor at the Home of the Brave brew pub in Honolulu. (Wyatt Olson/Stars and Stripes)

FORT SHAFTER, Hawaii — About half of the collection that made up the Home of the Brave Museum in Honolulu is now on the auction block, while the items most closely related to World War II and survivors of the 1941 Pearl Harbor surprise attack are headed for Colorado.

The museum had struggled to survive over the past three years, closing its doors in December in preparation for relocation from the city’s funky-but-cramped warehouse district to the tourist-laden Waikiki Beach, which has been a ghost town since late March in the wake of the coronavirus pandemic.

“This coronavirus has absolutely wiped us out,” said Glen Tomlinson, who has been operating the museum since the early 1990s with his wife, Janet.

The couple maxed out their bank credit and took out a second mortgage on their house to keep the doors open as they searched for a benefactor. An investor had stepped in to make the Waikiki Beach location a reality, Glen Tomlinson said, but the widespread economic setback from the coronavirus shutdown ended that possibility.

They now plan to move themselves and the remaining core collection to Colorado, where they hope to set up a similar but more modest operation.

“We got all the stuff out of the museum and into our garage,” Tomlinson said. “And then this damn coronavirus thing. It was like the perfect storm. We had an investor lined up to do this whole thing. We just lost it.”

The Tomlinsons also ran the Brewseum, a military-themed brew pub next door that generated decent revenue for the operation. But, like all bars on Oahu, it was ordered closed in March by Gov. David Ige in an effort to stem the spread of the coronavirus.

Among the items up for online bidding are tables, chairs, taps and decorations from the brew pub, along with the 1942 Willys jeep that adorned the Brewseum.

While it no longer has an engine or transmission, the jeep is the same year and model used by Adm. Chester Nimitz as his so-called “land flagship” in Hawaii during World War II.

One of the Tomlinsons’ three sons lives in Colorado and wants to help restart the Brewseum there.

They hope the auction will yield enough to pay off debt they’ve accrued through personal bank loans.

“There's some really cool items in there,” Glen Tomlinson said of the auction bill. “There are some really cool collectibles, one-of-a-kind things. But all of the signed prints – the ones that actually have meaning to me from all the Pearl Harbor survivors – I'm keeping all of that to try and do almost like a mini-museum over there in Colorado.”

He is reluctantly leaving behind some of the museum’s larger items, including a cherished customized table that was once on the carrier USS Enterprise and signed by a Pearl Harbor survivor.

“I didn’t want to let that go,” Tomlinson said, “but you can’t take everything.”