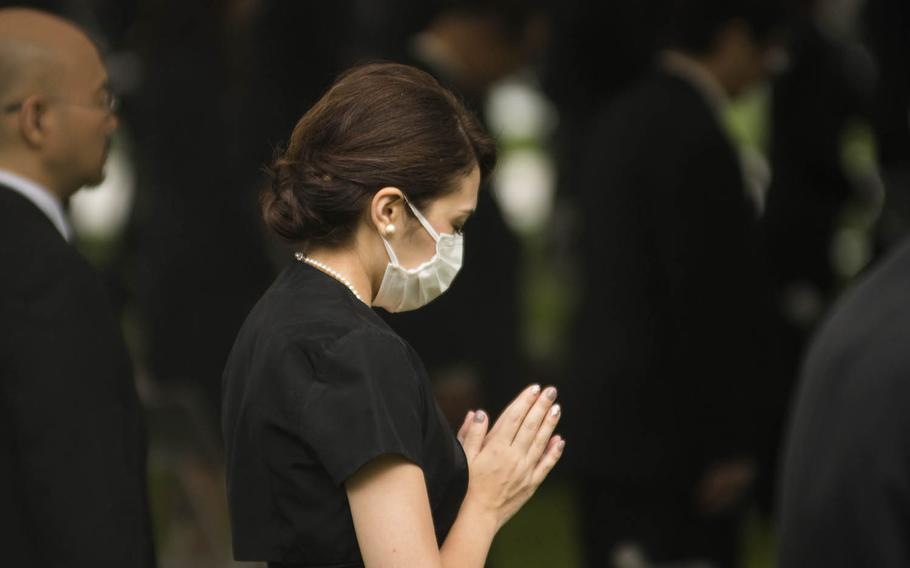 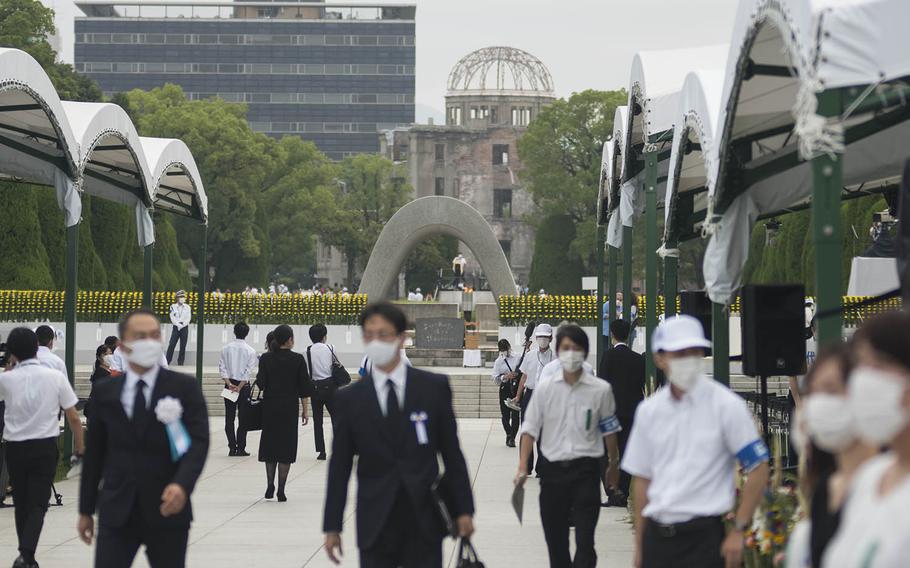 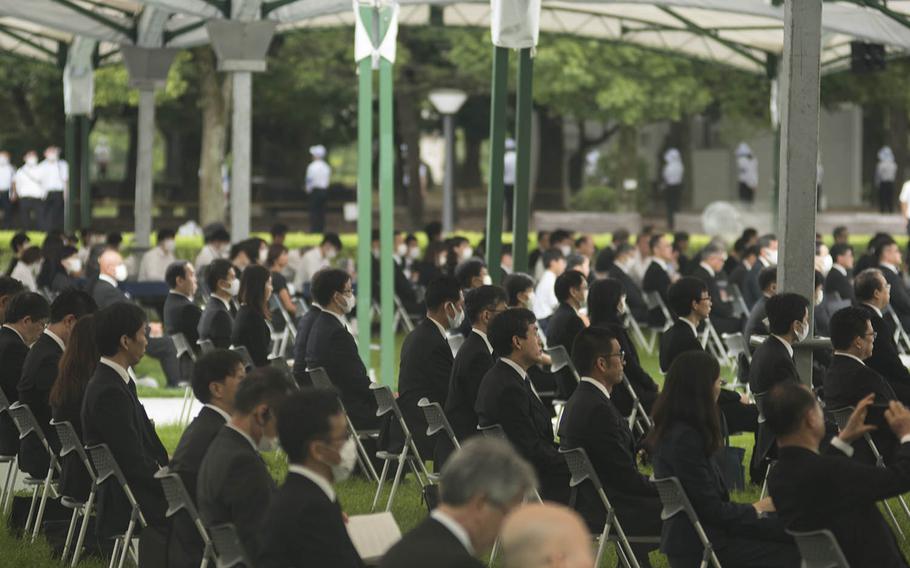 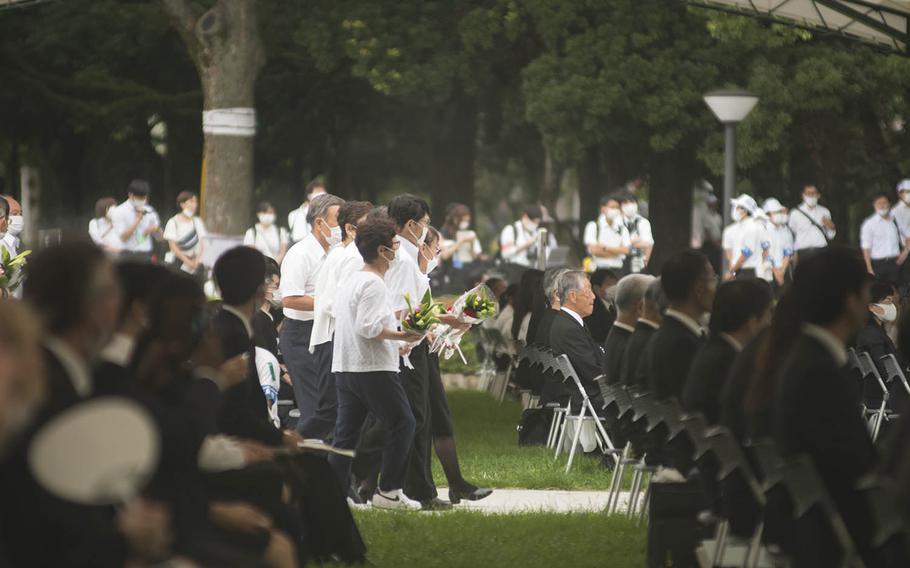 HIROSHIMA, Japan — The mayor of the first city to be devastated by an atomic bomb urged the world’s nations, including Japan, to take nuclear disarmament more seriously as Hiroshima marked the attack’s 75th anniversary Thursday.

"I ask the Japanese government to heed the appeal of the hibakusha (atomic bomb survivors) to sign, ratify and become a party to the Treaty on the Prohibition of Nuclear Weapons," Hiroshima Mayor Kazumi Matsui told an audience that included Prime Minster Shinzo Abe. "As the only nation to suffer a nuclear attack, Japan must persuade the global public to unite with the spirit of Hiroshima."

The city was effectively leveled by the attack on Aug. 6, 1945. Days later, a second bomb was dropped on Nagasaki, leading to Japan’s surrender and the end of World War II.

Matsui spoke during a ceremony at Hiroshima Peace Memorial Park that paused for a tolling bell at 8:15 am., the precise moment 75 years earlier that a U.S. B-29 Superfortress dropped the bomb, dubbed Little Boy, over the city center. The annual ceremony was scaled back significantly this year because of concerns over the coronavirus.

The bell sounded seven times for the 324,129 lives lost either in the atomic bombing or from its effects in the years since. The wavering tone swept across the crowd of survivors, mourners who lost family in the attack, dignitaries, media and Hiroshima residents who gathered to mark the anniversary.

“It was said that nothing will grow here for 75 years, but 75 years later, Hiroshima city is vibrant and full of greenery,” Shunsuke Omori, a sixth-grader from a local school, said during the ceremony.

Next to him, fellow sixth-grader Natsumi Nagakura, who goes to a different school, described modern-day Hiroshima, in which families laugh and children go to school and play in city parks.

That normal life changed again this spring, Omori said, referencing the appearance of the coronavirus, and with it, social distancing, masks and lockdowns.

“We realized that ordinary life is not always ordinary,” he said. “Now we understand how fortunate we are to have [an ordinary life].”

About 800 people attended the ceremony, less than 10 percent of the average number of attendees, according to a report by public broadcaster NHK. The pandemic also forestalled attendance by some world leaders and forced those who did attend to stand apart from one another and wear masks.

However, some foreign leaders recorded messages for the commemoration that were played on large screens before and during the ceremony, including Secretary General of the United Nations Antonio Guterres, Prime Minister of Sweden Stefan Löfven and President of Turkey Tayyip Erdogan.

They offered condolences, referred to the pandemic and made calls for unity, perseverance and denuclearization, a goal espoused by the Hiroshima bombing survivors. Several also spoke out against the rising trend toward nationalism in many countries around the world.

Abe said efforts must be made to remove distrust among countries through coordination and talks that pursue common ground even as nations differ on nuclear disarmament.

“As the only nation to have experienced nuclear devastation in the world during a war, it is our unchanging mission to step by step and steadily move forward the efforts by the international community to realize the world without nuclear weapons,” he said.

The horrors and suffering it brought to the people Hiroshima and Nagasaki should never be repeated, Abe added.

Hours before Thursday’s ceremony, people prayed at a cenotaph holding the names of those who died. The names of 4,934 atomic bomb survivors, who died this year, were added. The list includes 12 American prisoners of war who died in Hiroshima when the bomb was dropped.

An inscription on the cenotaph says: “Let all the souls here rest in peace for we shall not repeat the mistake.”