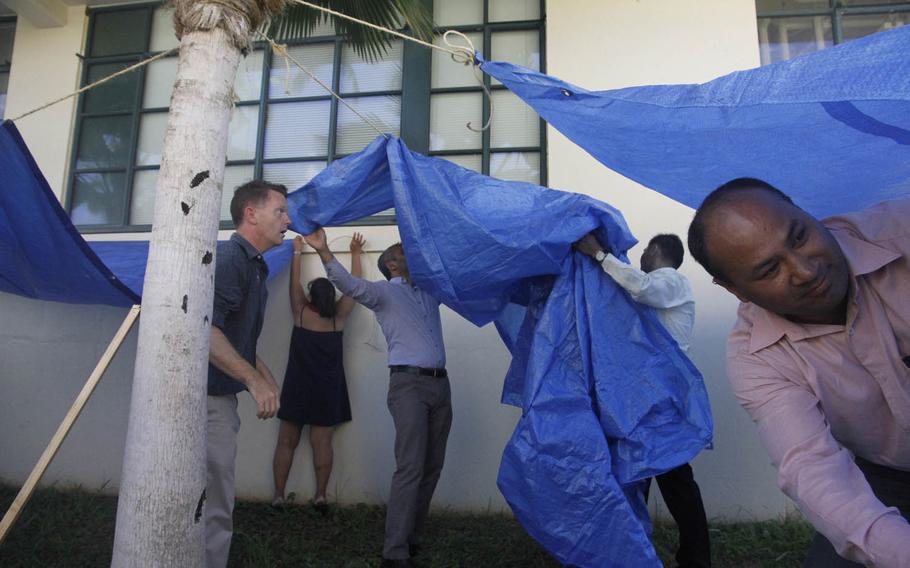 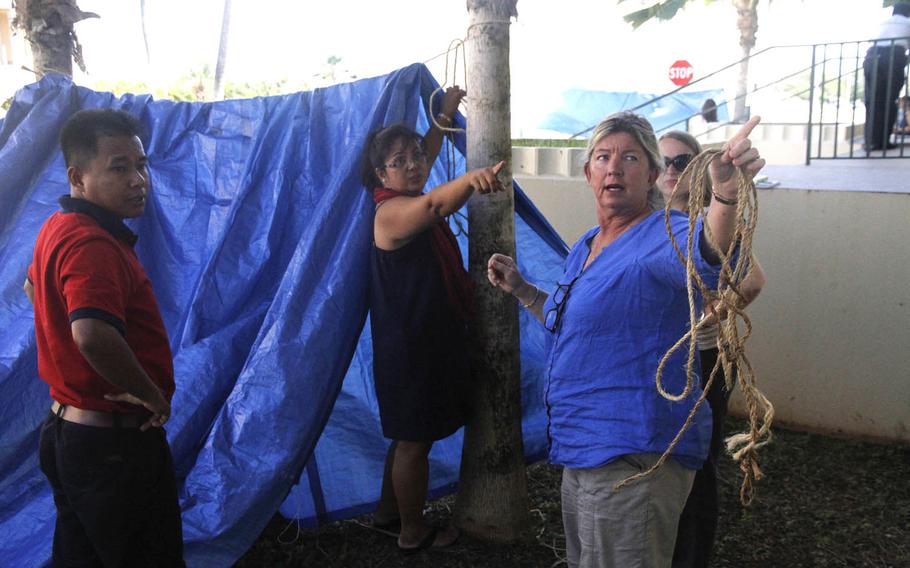 Manoj Thokar, left, a trainer with the Nepal Red Cross, works with his five-member team to construct a makeshift shelter Aug. 19, 2015, during an exercise at the Center for Excellence in Disaster Management and Humanitarian Assistance on Ford Island, Hawaii. (Wyatt Olson/Stars and Stripes)

FORD ISLAND, Hawaii — Twenty disaster relief professionals raced the clock to build four makeshift shelters in 20 minutes under sweltering sun. The blue-tarp lean-tos weren’t anything fancy, but the exercise underscored a basic tenant of humanitarian assistance: being a jack-of-all-trades is critical in a crisis.

Among many competing priorities in the wake of a disaster is medical assistance, as shown at the two-week Health Emergencies in Large Populations course at the Center for Excellence in Disaster Management and Humanitarian Assistance in Hawaii. The center — housed in a former World War II dispensary whose courtyard took a direct hit from a Japanese bomb on Dec. 7, 1941 — facilitates the course administered by the Geneva-based International Committee of the Red Cross.

The HELP course is offered at only 10 institutions around the world, and the one presented in Hawaii under U.S. Pacific Command is exceptional for mixing military and civilian elements.

“That’s one of the unique things about this center,” said Col. Joseph Martin, the center’s director. “We have the ability to integrate military and civilian communities of interest — in this case the medical community — because we’re enabled by law to do that. Most (Department of Defense) organizations can’t do training and education with civilians. It’s the way the government happens to be structured.”

The disaster center’s founding director spent years trying to get the ICRC to allow a DOD organization to present the course, Martin said. About 350 people have completed HELP over its 18 iterations.

The value of offering a melded military-civilian course in Hawaii is straightforward, Martin said.

“That’s the way the world operates in a disaster,” he said.

To some degree, militaries are always involved in major disaster relief in the Asia-Pacific region, and in some cases, a host country’s military is the first responder.

“Bringing civilians in and having them orient to the military side of it, that pays huge dividends,” said Martin, who added there’s an “inherent misunderstanding” between how civilians and the military perceive each other’s roles during a disaster. “We interface at the nexus of this.”

Four of the students in the course are with the Nepal Red Cross Society. Like many participants, they are on hand not only to learn but to share experiences — in their case, lessons learned from April’s massive Nepal earthquake that killed about 9,000 people and injured 23,000.

“This course is definitely important for anyone working in the field of disaster management and emergency health management,” said Manoj Thokar, a Nepal Red Cross training officer with 13 years of emergency relief experience. “The training is theoretical as well as practical.”

And while some students are familiar with the content of the HELP course, sharing experiences among students “has made the session more powerful.”

Other students are from Australia, Malaysia, Canada and Hong Kong. Course presenters are from Stanford University School of Medicine, University of Hawaii-Manoa, the World Health Organization, Save the Children USA, UNICEF and RedR Australia.

Topics include the response to the recent Ebola virus epidemic in Africa, medical site planning, use of social media during a health crisis, mass casualty management, reproductive health needs in emergencies and infant feeding.