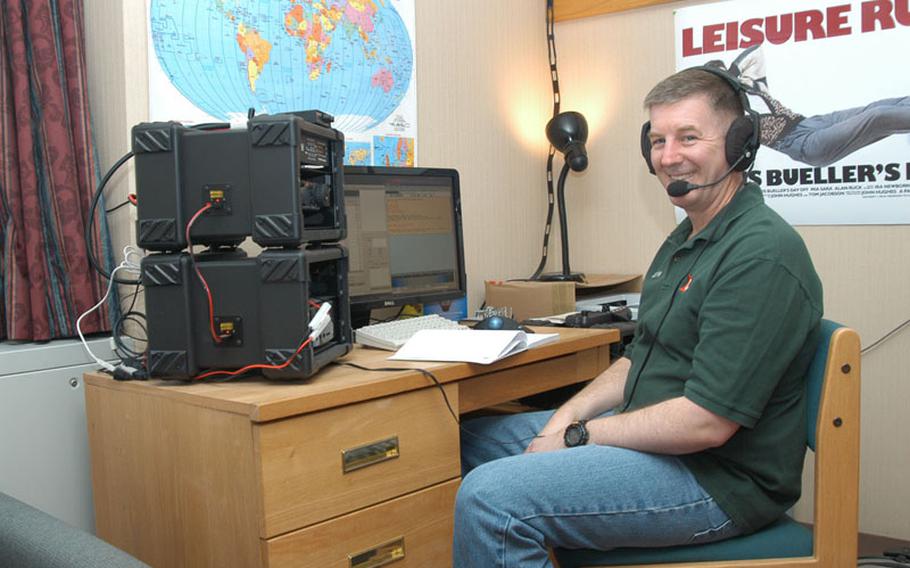 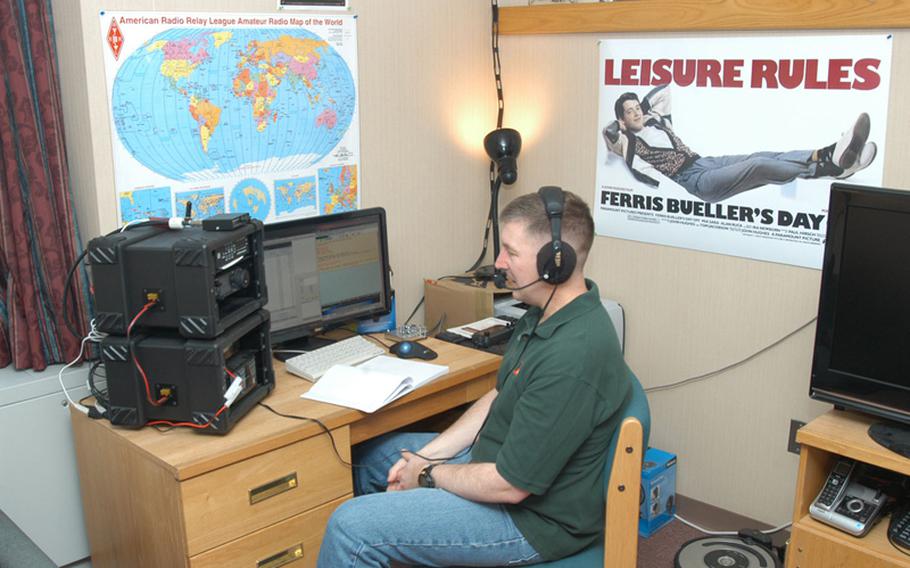 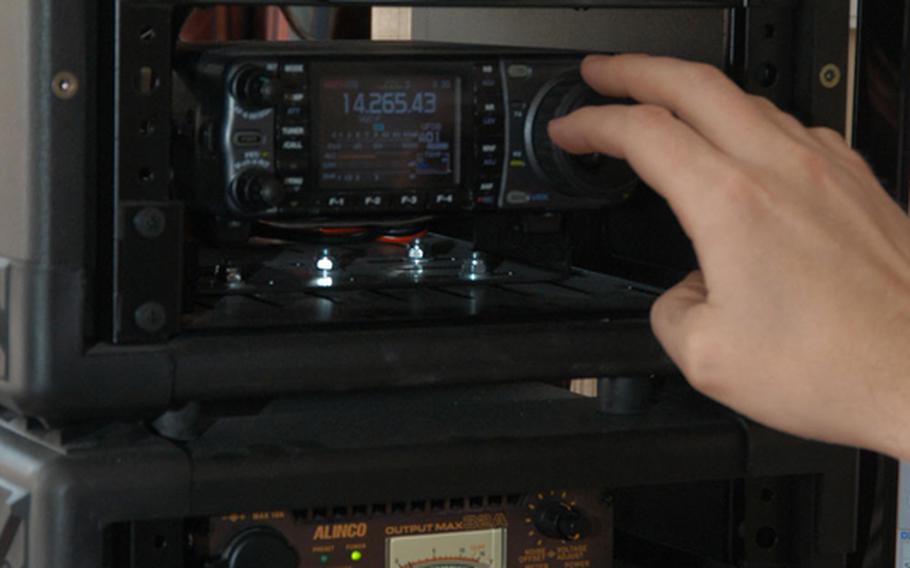 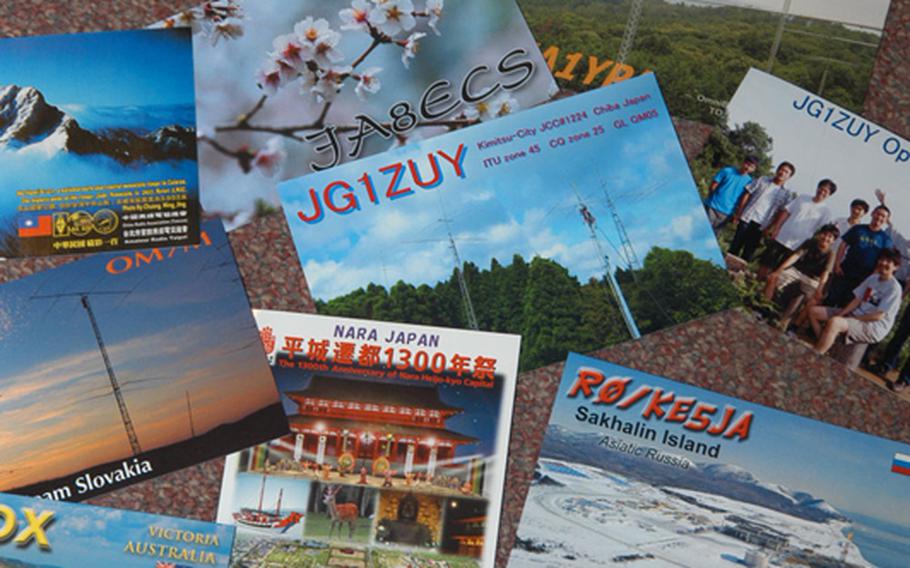 Buy Photo
Ham radio operators routinely exchange post cards to confirm contacts they have made with people in other countries. Pictured are cards U.S. Army Maj. Scott Hedberg has received from fellow ham enthuiasts in some of the 45 countries he has contacted since coming to South Korea. (Jon Rabiroff/Stars and Stripes) 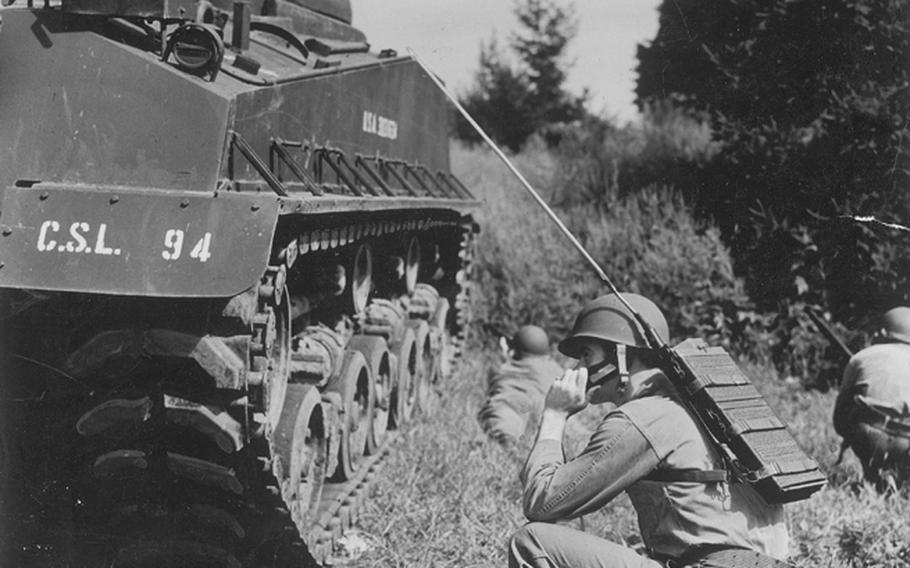 'WALKER-TALKIE' designed by the Signal Corps is lighter and more versatile than the World War II model. It weighs about 20 pounds and permits the infantrymen to talk with the tanker. It comes in three models for infantry, armor, and artillery and has a range up to five miles. The set is being mass produced under the nation's new armorment program. (Courtesy of the U.S. Army) 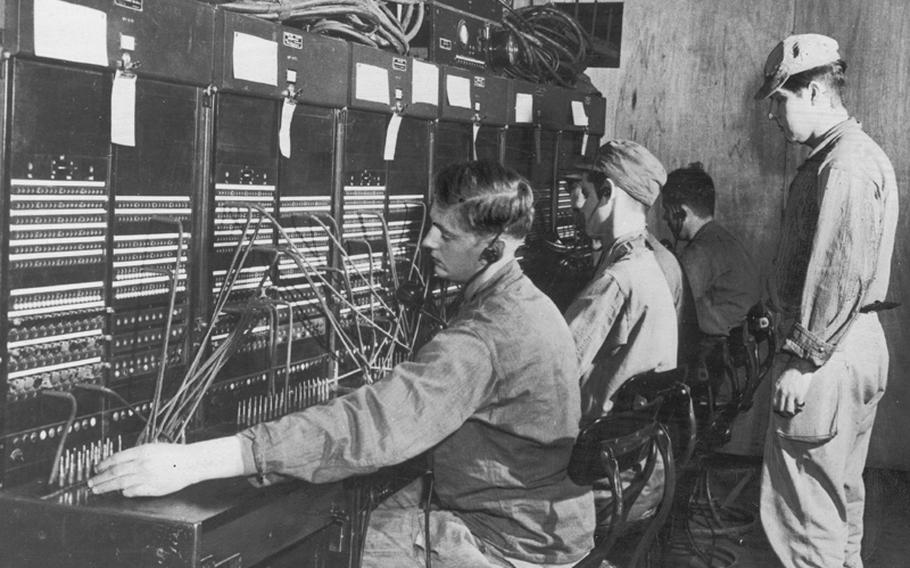 Switchboard operators of the 101st Signal Battalion go through their daily routine of connecting IC Corp units with other commands in Korea in this photo from 1952. An estimated 8,000 calls were handled daily by these soldier operators. (Courtesy of the U.S. Army) 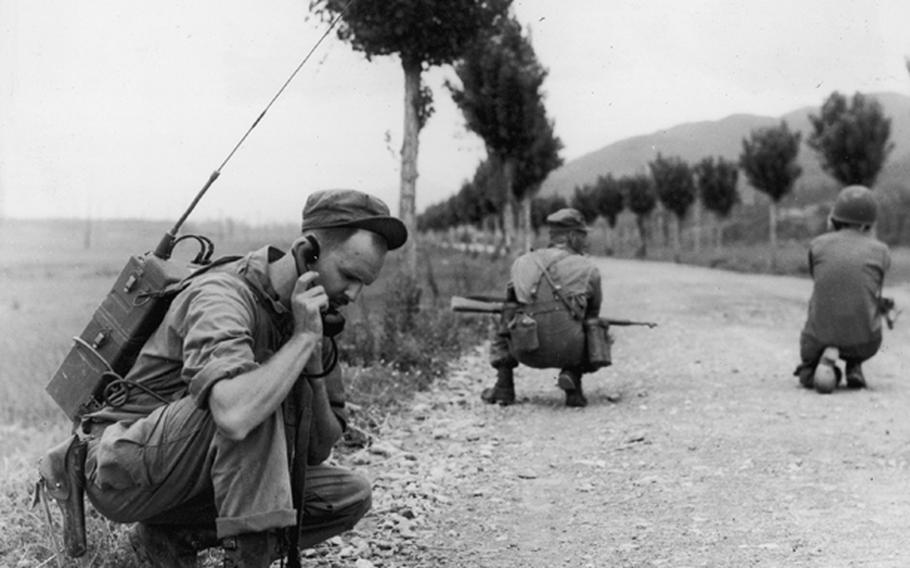 The U.S. Army Signal Corps has been a leader in the development of new and better methods of communication on the battlefield. In this photo from 1952, a soldier checks with artillery headquarters via &#39;walkie,&#39; s Signal Corps development. (Courtesy of the U.S. Army) 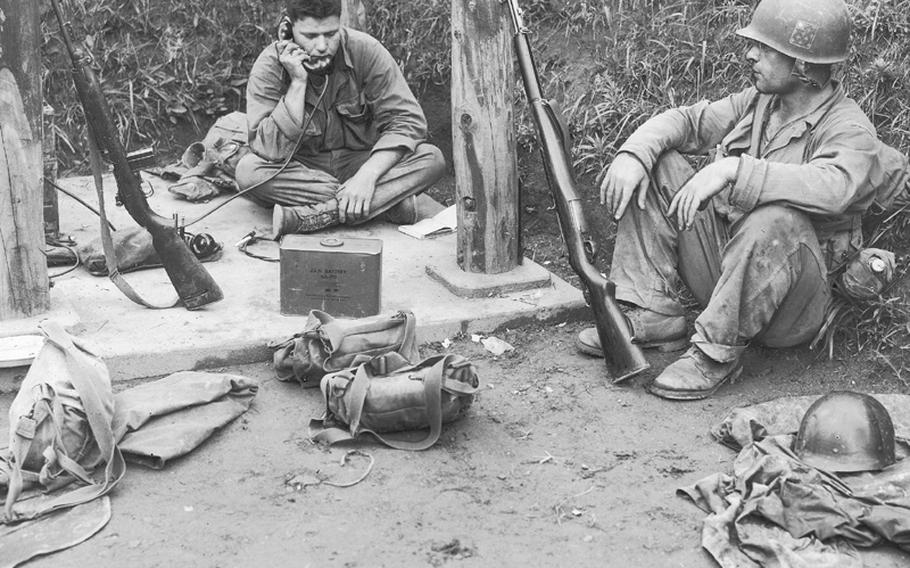 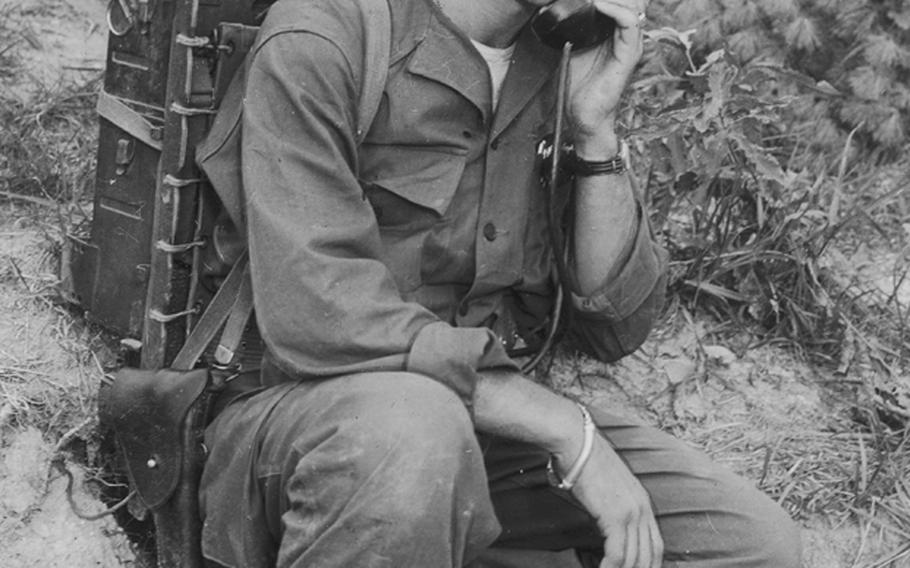 In this photo from 1950, Cpl. John Myrick of Nashville, Tenn., assistant communications chief of courageous Love Company of the 7th Infantry Regiment, 3rd Division, illustrates the use of the Army&#39;s SCR 300 radio during action for which the unit was commended by Supreme Allied Commander Gen. Matthew R. Ridgway. (Courtesy of the U.S. Army) 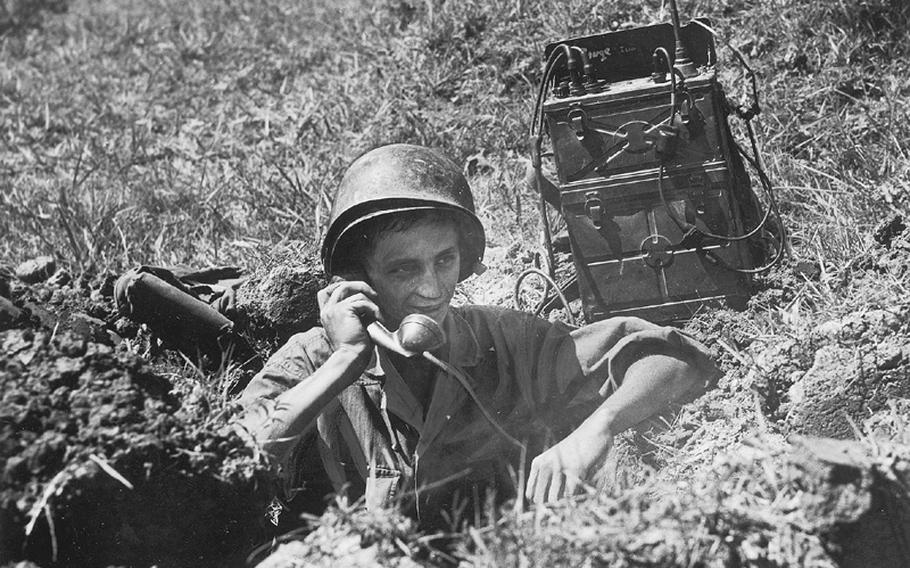 An American soldier manintains communication at a optar position on the fornt lines somewhere in Korea in this photo from July 25, 1950. (Courtesy of the U.S. Army)

SEOUL &mdash; Ham radios once played a key role in the operations of the U.S. military before fading into the background with the arrival of better and more accessible forms of communication like cell phones, the Internet and Skype.

But just when you start to think ham radios might go the way of rotary phones, 8-track tape players and phonographs, disaster strikes and the old war horses of communications fill a void in the response to emergencies.

Ham radio operators were widely credited with helping with emergency communications in the wake of the 9/11 attacks and Hurricane Katrina. Sixteen days ago when an earthquake and tsunamis devastated Japan, ham radio hobbyists and their outdated technology once again got involved in reconnecting families and guiding emergency aid where it was most needed.

&ldquo;In the fairly early stages after the earthquake, several radio amateurs were able to activate their stations with car batteries or small-engine generators,&rdquo; Japan Amateur Radio League International Section Manager Ken Yamamoto said in an e-mail to Stars and Stripes. &ldquo;They transmitted rescue requests and information on the disaster situation, including refugee centers and their needs and/or the availability of basic infrastructures, like electricity, water and gas supplies.&rdquo;

Yamamoto said information gathered from ham radio operators in the hardest hit areas of the country was &ldquo;reported to the rescue and disaster relief organizations for their appropriate deployment.&rdquo;

Radio equipment manufacturers distributed hundreds of transceivers for use at relief and refugee centers, he said, which &ldquo;should help ... to facilitate smooth and appropriate delivery of disaster-relief goods.&rdquo;

In some cases, ham radio operators also helped anxious people around the world find out about the welfare of loved ones in Japan.

Trevor Jones of British Columbia, Canada, called embassies and checked social media websites immediately after the earthquake, checking on the welfare of his son, Jonathon, but it was the ham radio of Jonathon&rsquo;s grandfather that played a key role in reconnecting him with the 32-year-old English teacher in Sendai, according to the Montreal Gazette.

&ldquo;I think they&rsquo;ve forgotten about ham radios,&rdquo; Trevor Jones is quoted in the Gazette. &ldquo;If you went back to the time when I was 32 years old, that was the only system that wouldn&rsquo;t break down.&rdquo;

Ham radio may be a dying form of communication, but amateur-radio hobbyists don&rsquo;t want any static about their passion &mdash; one that appears to have a significant following among members of the U.S. military.

&ldquo;I will be the first to admit that using ham radio to communicate is far from being the most efficient means of communication,&rdquo; said U.S. Army Maj. Scott Hedberg, a ham-radio operator based at Camp Red Cloud in South Korea. &ldquo;I think you can best look at it like, &lsquo;Why do people go horseback riding or ride bikes? Isn&rsquo;t there a more efficient way to get from A to Z?&rsquo;

&ldquo;Sure, but it is the enjoyment of the journey that is the key.&rdquo;

There are still references in military regulations to ham radio use. For example, U.S. Forces Korea regulations state that, &ldquo;When directed, amateur radio operators will assist in providing communications for all types of disaster and will work with various relief agencies as necessary.&rdquo;

However, Hedberg said, &ldquo;Just based on the robust communications we have here today ... I would think it would have to be fairly extreme circumstances, from a military standpoint, that they would be coming to me for any sort of assistance.&rdquo;

That has not stopped hobbyists &mdash; they number &ldquo;in the hundreds&rdquo; among active troops, Hedberg said &mdash; from spending their off hours spinning dials and connecting worldwide with others with a passion for the technology and quaintness of ham radio conversations.

Richard A. Bartlett, the 90-year-old author of &ldquo;The World of Ham Radio, 1901-1950: A Social History,&rdquo; said, &ldquo;Morse code may be disappearing and hams declining in numbers, but what of the innovators?

&ldquo;I think the curious, highly intelligent radio gadgeteer deserves a viable place in our society, including the military. Ham radio, in its social aspects, provides these bright, inquisitive people with contacts, rivalries, challenges and, yes, friends with similar interests.

&ldquo;It would be tragic for their wonderful hobby to disappear.&rdquo;

For now, the hobby does not appear to be on its last legs: Today, there are an estimated 2 million ham radio enthusiasts around the world.

Hedberg explained there are a number of reasons people are still attracted to the ham radio hobby, despite the arrival of easier and more advanced forms of communication.

&ldquo;Just the challenge involved,&rdquo; he said. &ldquo;It takes a little bit to get everything set up right. There&rsquo;s a little bit of magic involved. Just being able to talk from here back to the United States is pretty cool.

&ldquo;Can I pick up a phone and do that? Sure I can,&rdquo; he continued. &ldquo;It&rsquo;s a tougher journey getting there, but I get a lot more satisfaction doing that.&rdquo;

Bartlett said, &ldquo;Computers and the World Wide Web are wonderful, but dedicated hams are still necessary in times of disaster. They are the initial contacts in cases of natural disasters. Ham members of clubs contact ham members of other clubs. Club members spell their ham brothers during disasters when they are on the air 24 hours or more at a time. Their contributions are vital.&rdquo;

Hall said when disaster strikes, things like cell phones and Skype are not necessarily going to work.

For a ham radio operator to connect to the world, he said, &ldquo;All you need is a car battery and a coat hanger, and you can &lsquo;MacGyver&rsquo; it.&rdquo;

Yamamoto said one of the lessons learned through the disaster in Japan is that, &ldquo;Radio amateurs should have periodic training for well-controlled and reliable disaster communications, even in chaotic situations.

&ldquo;Amateur radio clubs should coordinate their roles in disaster situations with local rescue and disaster relief organizations, and emergency medical centers,&rdquo; he said.

Bartlett closed his book with a plea to readers to introduce their children to the world of ham radios.

&ldquo;You will be doing not only your son or daughter a favor but, indirectly, the world at large,&rdquo; he wrote.