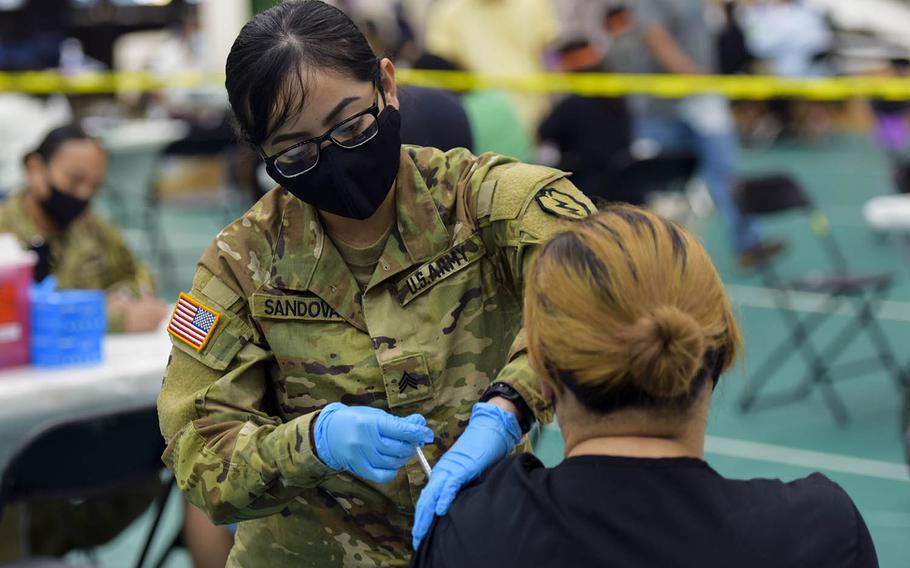 Meanwhile, many restrictions remain in effect for service members in the U.S. territory, though many have been allowed to patronize local bars and restaurants, albeit in limited numbers, since early spring.

On May 3, a 59-year-old man became Guam’s 137th COVID-19 fatality and its first since March 13, according to the island’s Joint Information Center. The following evening, a 70-year-old man died, followed hours later by a 54-year-old man.

None of the men, who all had underlying health conditions, were vaccinated, Gov. Lou Leon Guerrero said in a statement Thursday.

“Our grief continues as we mourn the loss of another to COVID-19,” she said. “In order to overcome this pandemic, all of us must do what we can to prevent further spread.”

On Tuesday, Guerrero announced she would not ease restrictions, as planned, though Guam had succeeded in its Path to Half campaign to vaccinate half the island’s population. Though it allows most activities, Guam’s public health emergency mandates social distancing and mask wearing and requires bars and taverns to operate at 50% capacity.

By Wednesday, 68,596 of the island’s 169,000 people were fully vaccinated, according to the information center. Nearly 133,000 doses have been administered.

“While we have achieved our Path to Half goal, it was prudent that we keep our strict quarantine protocols in place to continue to protect our community against this deadly virus and its variants,” Guerrero said.

Guam’s next goal is to inoculate 80% of the population in an initiative called Operation Liberate Guam. Guerrero urged people to get vaccinated.

“Vaccines save lives,” she said in her Tuesday statement.

Guam has recorded 8,020 COVID-19 cases during the pandemic, according to the information center. However, the island has been making strides toward normalcy.

Some service members on Guam have been able to visit bars and restaurants since March 19, according to an order by Rear Adm. John Menoni, commander of Joint Region Marianas, and 36th Wing commander Brig. Gen. Jeremy Sloane. Services then set their own group size limits, 25 or less for airmen and 15 or less for sailors, according to an email Friday from the 36th Wing.

Social gatherings in the surrounding communities are also permitted, according to the order, which applies to all Navy, Marine Corps, Air Force and Coast Guard personnel on Guam, joint region spokesman Lt. Cmdr. Rick Moore told Stars and Stripes via email Friday.

However, unit commanders have the authority to impose further restrictions. For example, airmen may participate in indoor team sports, but sailors may not, the 36th Wing said.