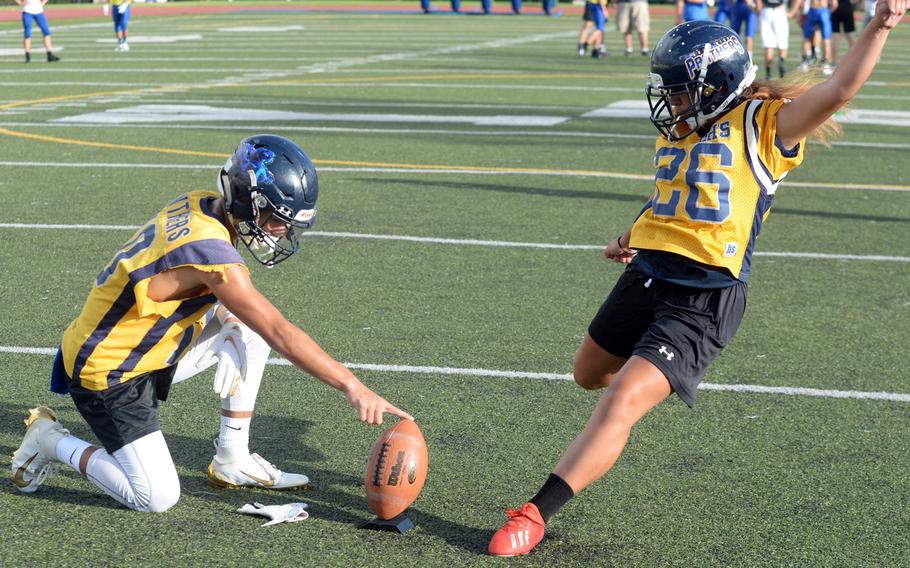 Buy Photo
Ali Shimasaki, a senior, was a placekicker on Guam High School's football team and was one of three returning girls soccer players from last year on a Panthers team that was aiming for its third island championship and a return to Far East Tournament play for the first time since 2013. Guam's private school league announced Friday it was shuttering spring sports season through the rest of the school year. (Dave Ornauer/Stars and Stripes)

Spring sports for Guam’s private school league have been canceled for high schools and middle schools because of the ongoing coronavirus threat.

The decision was announced Friday in a news release from the Independent Interscholastic Athletic Association of Guam president Terry Debold.

“This was a very difficult decision obviously influenced by the COVID-19 public threat and corresponding government mandates prohibiting social gatherings,” league president Terry Debold said in the release. COVID-19 is the official name of the new virus.

As a non-public school on the U.S. island territory, the Department of Defense Education Activity’s Guam High School belongs to the IIAAG. The league’s decision affects track and field, girls soccer, boys volleyball and paddling for high schools.

The announcement came as the number of cases on the island reached 82, according to local media reports.

The IIAAG initially suspended spring sports tryouts and practices in mid-March. This was extended through the rest of the school year after much discussion and “a great deal of consideration,” Debold said.

“We truly sympathize with all of our student-athletes … most especially the graduating seniors who will not have the opportunity to enjoy some final moments in high school sports,” he said.

This also would have been the first chance for Guam High’s track and girls soccer teams to compete beyond the IIAAG’s regular season.

Because their schedules match up with the other DODEA-Pacific spring schedules, those Panthers teams were afforded the chance to enter the Far East tournaments in both sports, DODEA-Pacific officials announced last fall.

However, those Far East tournaments, as well as those for baseball and softball, were canceled last week.

Track and field was scheduled for May 20-21 at Marine Corps Air Station Iwakuni, Japan, and girls soccer for large schools May 20-22 at Yokosuka Naval Base, Japan.

“We were so excited as a team to be invited,” Panthers girls soccer coach Rhoda Bamba said, adding that this was one of the rare Guam High School teams with 11 players with “average to high soccer IQ” and three, including senior Ali Shimasaki, returning from last season.

“One of the saddest things I had to hear,” Shimasaki said of losing both her senior season and a chance to play at Far East.

Panthers boys track won their third straight Guam island title last season and the girls team just missed winning. Coach Joe Taitano said he was hopeful both genders could sweep the island titles this season and make noise in its return to Far East for the first time since 2013.

“It’s unfortunate,” Taitano said. “We had a chance. … But there’s always next year.”