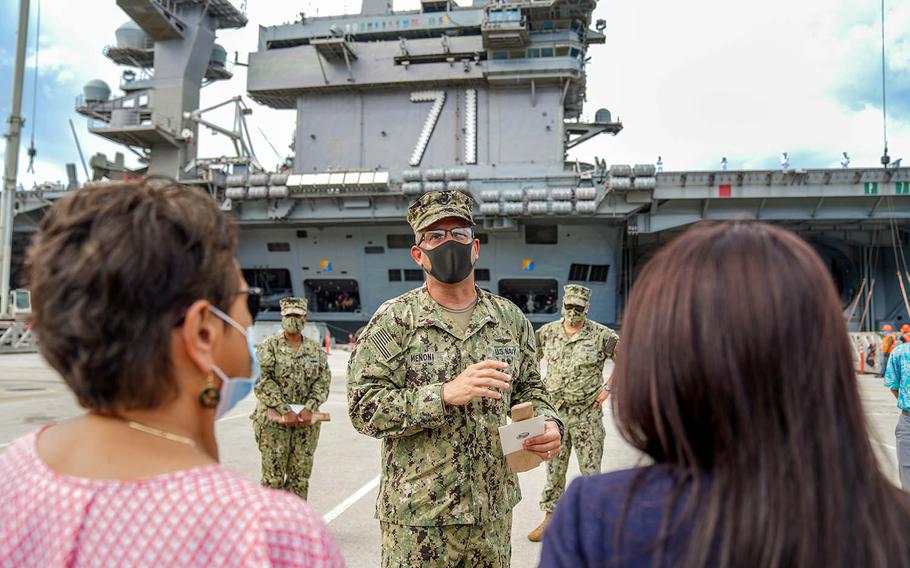 Guam Gov. Lou Leon Guerrero, a Democrat, recently came under fire from the U.S. territory's Republicans for saying her administration is "milking" concessions from the federal government in exchange for hosting the coronavirus-stricken USS Theodore Roosevelt in March.

The aircraft carrier arrived in Guam on March 27 after an outbreak of the virus spread rapidly among the ship's 5,000-person crew. More than 1,200 sailors ultimately tested positive for the virus and one died.

The carrier stayed for two months before it was able to redeploy. Many of its sailors quarantined in island hotels.

"The best decision I ever made is allowing the USS Theodore Roosevelt to go to our hotels, because they think we're just the bomb," Leon Guerrero said referring to the U.S. military during a group chat Thursday on Facebook that was posted to the KUAM News page.

During the chat, Leon Guerrero said the island has enough personal protective equipment on hand to combat the virus. Guam, with a population of nearly 160,000, on Tuesday reported a pandemic total of 6,655 viral cases and 107 deaths, according to the Joint Information Center there.

The U.S. government, she said, provided a good inventory of protective gear in exchange for hosting the Roosevelt.

The Federal Emergency Management Agency and the military also directed that Guam get whatever it asks for, the governor added. She said the territory has since received more than 79 ventilators and a solid inventory of personal protective equipment.

Guam was also given use of the military's intensive-care coronavirus tent set up for the Theodore Roosevelt sailors, should the island need it.

Secretary of the Navy Kenneth Braithwaite also agreed to return unused military land to Guam, she said. Leon Guerrero said the land would be the site of a new hospital.

The comments drew an instant rebuke from the Republican Party of Guam.

"When a stranger is hungry or hurt, we … extend our arms and help, not because of what we will attain in return, but because of who we are, and what our manamko' has taught us to be,” said a party statement published by The Guam Daily Post on Saturday. "We did not extend our arms so that we can ‘milk’ the military or the federal government in return."

Manamko' is a Chammoro word for elders.

Party officials told the Post that accepting the Theodore Roosevelt crew, which included Guam residents, was the "right thing to do" and criticized the governor for forgetting that the sailors were "serving to protect the people of Guam."

Leon Guerrero's spokeswoman, Krystal Paco-San Agustin, said Monday the decision to host the sailors was done selflessly, without regard for what might be given in return.

However, she said, the governor has long touted the mutually beneficial relationship between the U.S. military and Guam. The government is more likely to respond to a friend "that has had their back" than a politician "begging for attention."

"At every point possible, [the Defense Department] and the Governor have made clear that our relationship is founded on the shared responsibility to defend this nation from its enemies and on our desire to make the Guam Buildup good for Guam," Paco-San Agustin wrote in an email to Stars and Stripes. "If helping the USS Roosevelt saved lives and increased our chances at the return of unused federal land or additional COVID support, the fact that some Republican politicians on Guam oppose that says more about them than it does about us."