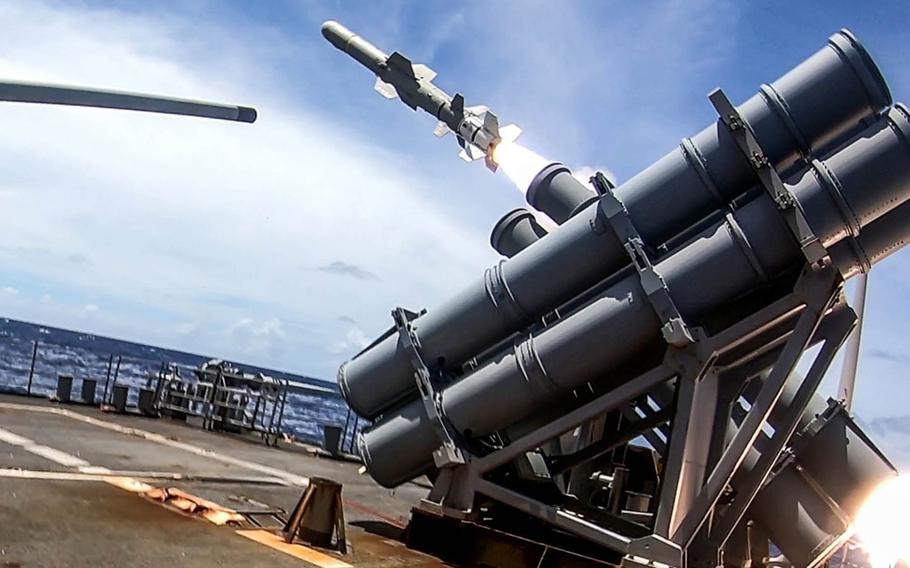 The U.S. Air Force is testing its leading-edge warfare networking system during the two-week Valiant Shield exercise underway in Guam, a connect-everything concept that is the service’s top modernization priority.

The innovative approach is called the Advanced Battle Management System, and the scenarios taking place during Valiant Shield are part of the third field test of the concept.

“The Advanced Battle Management System, or ABMS, allows a joint force to use cutting-edge methods and technologies to rapidly collect, analyze, and share information and make decisions in real time,” the Air Force said in a news release this month.

The goal of field testing during an exercise such as Valiant Shield is to throw “a dizzying array of information for participants to synthesize, just like they would see in a real operation,” the release said.

The concept received its first field test — dubbed as “onramping” by the Air Force — in December at Eglin Air Force Base, Fla.

“This is the number-one modernization priority for the U.S. Air and Space force,” Brig. Gen. Jeremy Sloane, commander of the 36th Wing at Andersen Air Force Base, Guam, said during the conference call.

The ABMS is focused on moving from a “platform-centric to a network-centric warfare approach” when it comes to joint all-domain command and control, Sloane said. “We’re excited to introduce that into our exercise.”

This year’s Valiant Shield, which concludes on Friday, involves about 11,000 personnel from the Navy, Air Force, Army and Marine Corps. Roughly 100 aircraft are involved in the U.S.-only exercise, which is intended to hone joint warfighting capabilities.

Due to precautions over the coronavirus pandemic, about 116 personnel are participating in the exercise remotely from Hawaii.

“The primary purpose of Valiant Shield is to demonstrate the U.S. military’s commitment to preserving, securing and maintaining regional global stability while remaining postured to respond, if and when needed,” Rear Adm. James Aiken, leader of the exercise, said during the conference call.

“We will accomplish this through joint all-domain operations which focus on training and improving leadership at all levels, including individual personal proficiency, which sharpens command and control skills while challenging participants to adapt to changing conditions as part of the joint force.”

Baldwin said information shared and processed under ABMS during Valiant Shield would be accessed and exchanged via the cloud, online and through apps.

A KC-46 refueling aircraft and F-22s from Hawaii will link with command and control in Guam as part of a scenario practicing joint execution across air, land, sea, space and cyberspace domains, Baldwin said.

Sloane said that the ABMS tools being tested will be applicable across U.S. joint forces.

“So, for instance, I have the multi-domain task force from the U.S. Army here in Guam,” Sloane said. “They have liaisons at my long-range fires coordination cell that is living in Hawaii. We are all linked together. We have the applications that they are sharing. We are using the Advanced Battle Management System to coordinate with the Navy as well, out at sea.”

By sharing ABMS with the other services during the initial stages, “we eliminate any sort of seams that may happen between services so that we’re a unified joint force able to integrate with our partners and allies,” Sloane said.