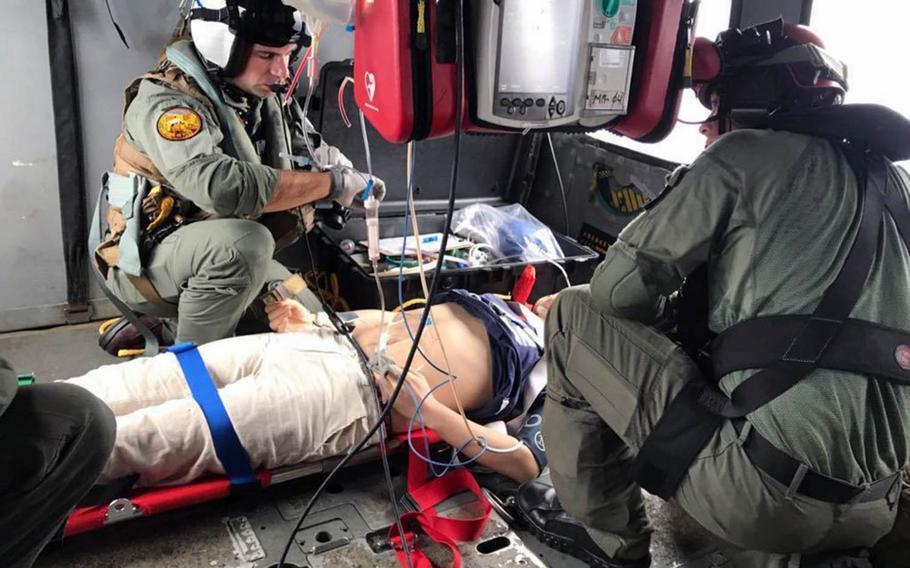 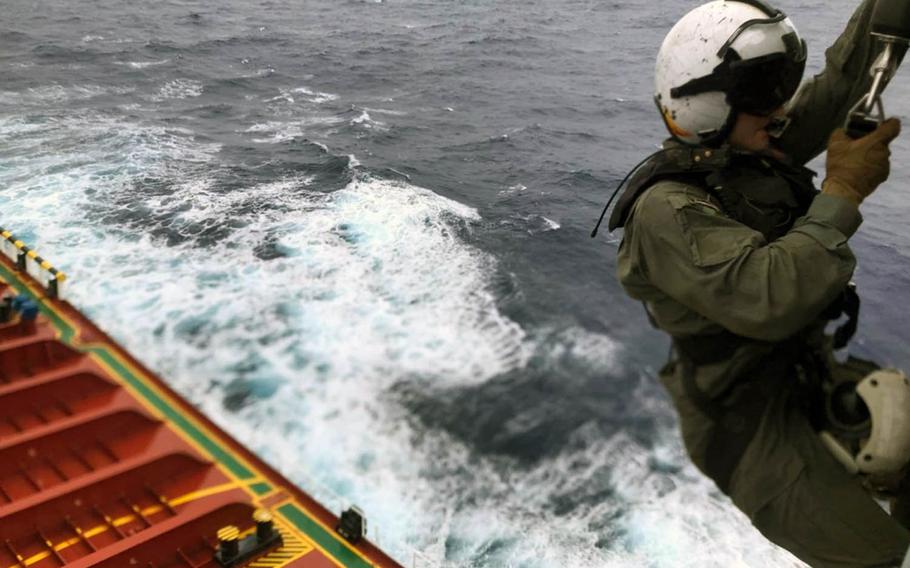 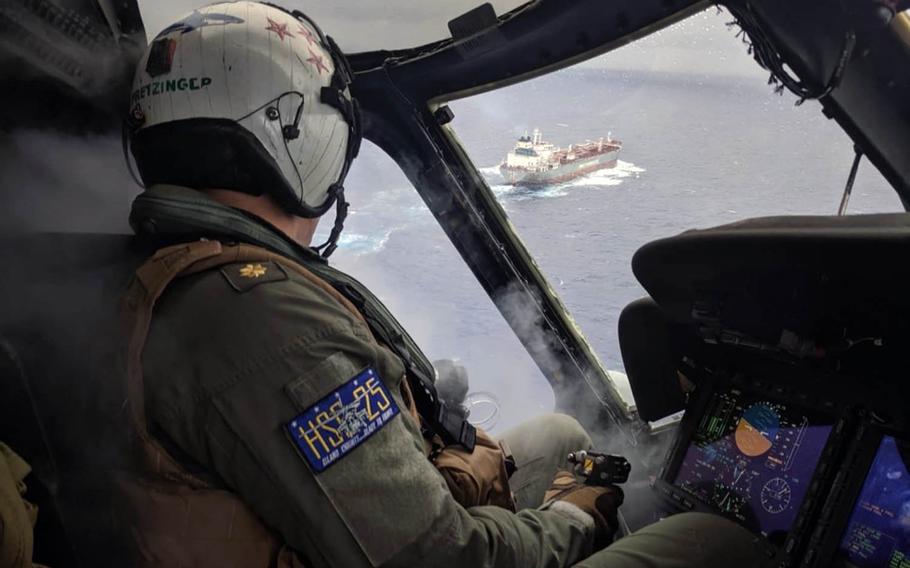 The save was the Island Knights squadron’s 16th this year.

It happened during stormy weather after U.S. Coast Guard Sector Guam alerted the squadron to a “distressed mariner” aboard the Chinese-flagged oil tanker CSC Brave, according to the statement. Within two hours, a squadron search and rescue crew left Andersen Air Force Base aboard an SH-60 Seahawk to rescue the person from the tanker.

Two crewmembers were lowered onto the Chinese vessel to check on the patient and prepare him to be hoisted into the Navy helicopter amid 15-foot waves, Lt. Michael Sipah, the Seahawk’s co-pilot, told Stars and Stripes in an email Thursday.

“The 15-foot sea state, less than ideal weather, as well as the moving ship, required precision work between the crew chief [Petty Officer First Class] Joshua Teague and myself at the controls to maintain the aircraft over the hoisting spot,” Sipah said.

The crew then lifted the mariner into the aircraft hovering above and gave lifesaving medical care, aircraft commander Lt. Cmdr. Philip Pretizinger said in the Navy’s statement.

A tropical storm moved through the region Tuesday, and small craft and high surf advisories were in effect, according to U.S. National Weather Service Guam. Wind gusts on Guam reached about 40 mph.

The crew ultimately brought the mariner to Guam Memorial Hospital for more help, according to the statement. Information about where the rescue took place was not immediately available.

It was the 18th time the Coast Guard has called Helicopter Sea Combat Squadron 25 to help and the 16th recovery during search and rescue or medical evacuations this year, according to the statement.

By this time last year, the squadron had made 10 survivor recoveries and received 22 emergency calls, according to a July 26 Navy statement.

Since its start in 1984, the squadron has saved 617 people in search and rescue operations and 667 in medical evacuations, Task Force 76 spokesman Lt. Cmdr. Russ Wolfkiel told Stars and Stripes Thursday.

The Navy’s only Seahawk squadron permanently stationed overseas, the unit averages about 30 rescues and 70 medical evacuations per year, according to the squadron’s website. It keeps emergency capabilities ready 24/7 to respond to calls from the Coast Guard and Joint Region Marianas, the organization that manages Andersen and Naval Base Guam.

The squadron also supports more traditional military duties such as drone and torpedo recovery and fleet logistics around Guam, according to its website.

Before Tuesday’s recovery, the squadron’s last rescue took place July 24 after a civilian was hurt sailing three days before in a severe thunderstorm about 100 nautical miles west of Guam, according to a July 25 Navy statement. The man’s condition had deteriorated over the three days, but the crew stabilized him with IV fluid during the flight back to Guam.

“HSC-25’s ability to launch our aircraft on a moment’s notice for a SAR or MEDEVAC is astounding,” HSC-25 commanding officer Cmdr. Frank Loforti said in the Navy statement. “Every Sailor should be proud of the lives we are able to save and the support we provide to Guam and the Commonwealth of the Northern Mariana Islands.”