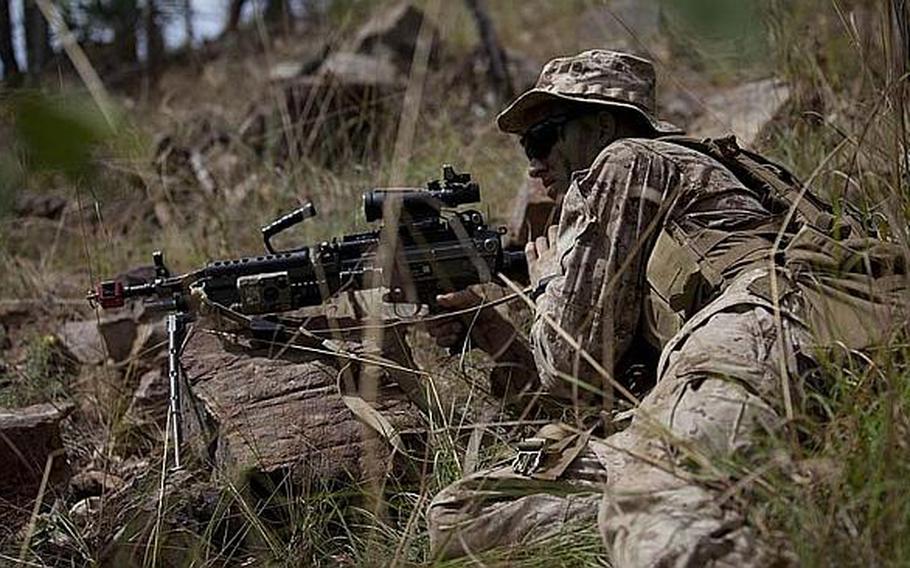 Lance Cpl. Gabriel L. Tennis, an automatic rifleman with the III Marine Expeditionary Force based in Okinawa, analyzes his surroundings during a 2012 exercise in the Australian outback. (Jacob D. Barber/Courtesy of the U.S. Marine Corps)

Lance Cpl. Gabriel L. Tennis, an automatic rifleman with the III Marine Expeditionary Force based in Okinawa, analyzes his surroundings during a 2012 exercise in the Australian outback. (Jacob D. Barber/Courtesy of the U.S. Marine Corps) 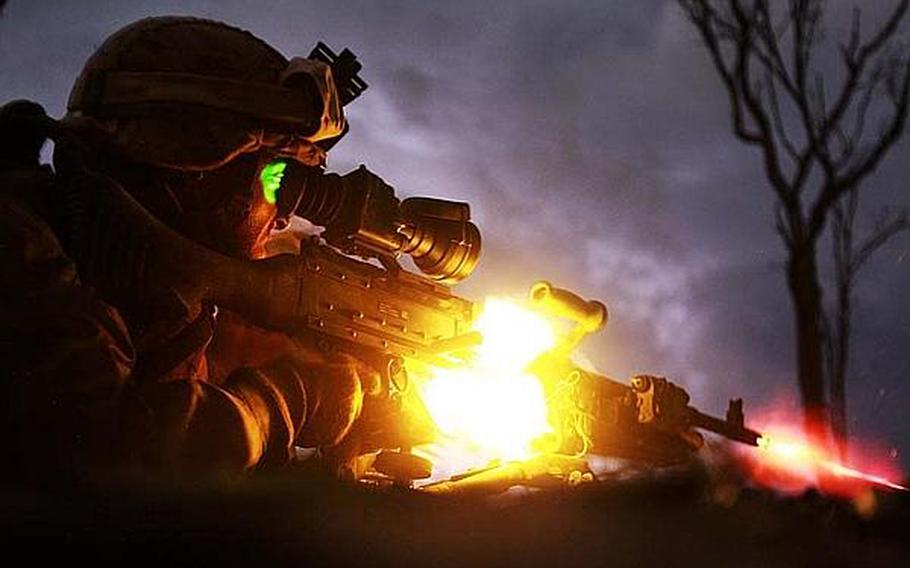 Pfc. Sebastian Rodriguez, a machine-gunner with the Marine Corps rotational force in Darwin, Australia, fires his weapon during a night exercise in May 2013. (Sarah Fiocco/Courtesy of the U.S. Marine Corps)

CAMP FOSTER, Okinawa — The U.S. military has still not fully planned or accurately calculated the cost of repositioning Marine Corps forces in the Pacific, despite warnings from Congress, according to a report by federal auditors published this week.

The Government Accountability Office found that no master plan exists, and the current $12.1-billion price tag omits many of the expenses that must be included in moving Okinawa-based Marines to Guam, Hawaii, Australia and the U.S. mainland.

It is the second GAO report since 2011 to warn that what may be the largest shift in military forces in the Pacific since World War II should be better planned. The report was prepared for Congress, where senators have frozen all Pacific realignment funding for several years while demanding the Department of Defense draft a master plan and better cost estimates.

“Our assessment of DOD’s preliminary estimate for the current realignment plan is that it is not reliable, because it is missing costs and is based on limited data,” the GAO said.

The agency warned that current plans are still not accurate enough for Congress to make a decision on supporting the realignment. The report was issued to congressional committees charged with overseeing military spending in the coming fiscal year.

DOD’s planning omits the full cost of constructing facilities and training ranges on Guam, where about 5,000 Okinawa Marines might be relocated, the GAO said.

The department has also not included the cost of regularly rotating 2,500 Marines through Australia or basing others in Hawaii and the United States, auditors found. About 200 Marines already are deploying annually to Darwin, Australia, and that number is supposed to ramp up over the next few years. The military has not said how many Marines may be relocated to Hawaii or the U.S. mainland.

Spreading Marine forces throughout the Pacific will also require more military travel and transportation, which could significantly increase costs, according to the GAO.

The DOD told the agency that solid cost estimates will not be possible until ongoing environmental studies on Guam are completed in the next two years and it can fully plan construction work there. Also, the U.S. must still hammer out a cost-sharing agreement with Australia on the rotational Marine force before knowing the potential cost to taxpayers, according to the report.

The overall realignment plans have also been shifting, making military planning a challenge.

The U.S. and Japan originally announced in 2006 that about 8,600 Marines would be relocated to Guam from Okinawa to reduce the large and controversial military presence in Japan.

The plan was overhauled last year after many delays. Now, only about 5,000 Marines are slated to move to the U.S. territory with 2,000 to 3,000 more spread across the region as part of a new military layout in the Pacific as the military leaves Afghanistan.

Over the years, cost estimates have ranged from $8.6 billion to nearly $24 billion.

So far, no money has been spent on the realignment outside of military environmental studies, project design work and some facility improvements on Guam.