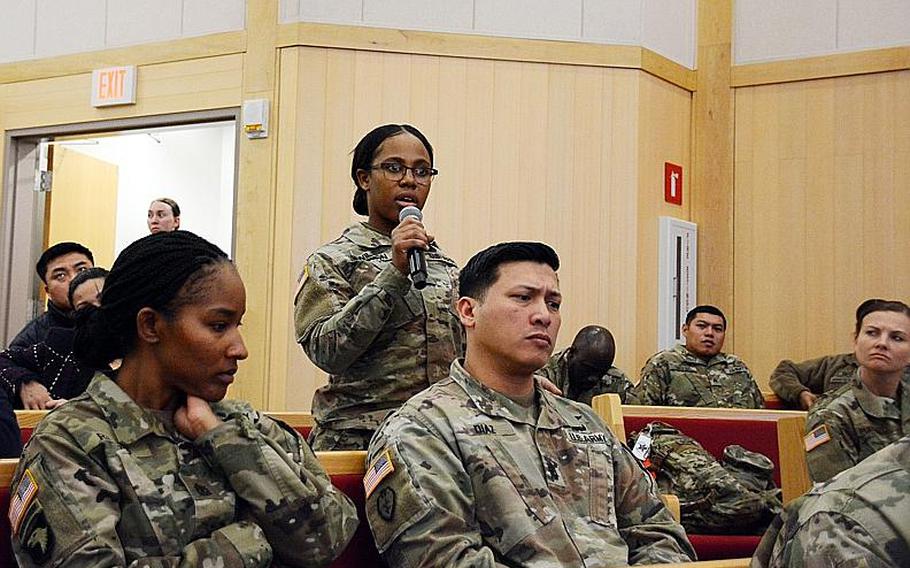 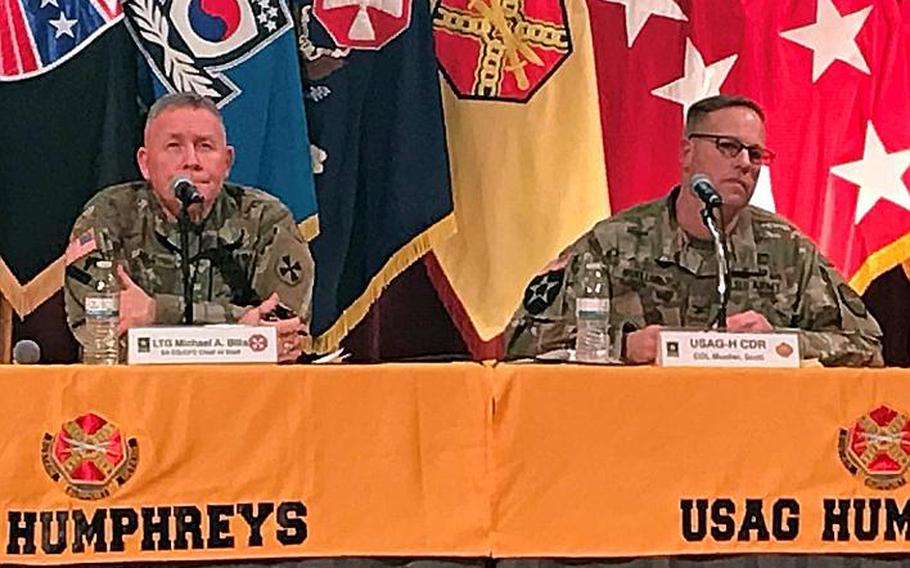 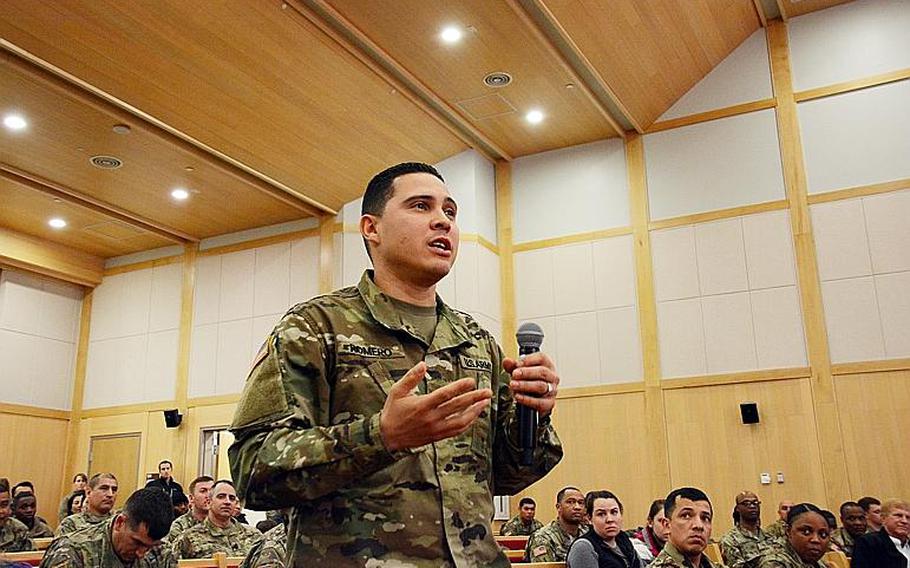 CAMP HUMPHREYS, South Korea — A 10-year-old girl was stuck in an elevator for 45 minutes before somebody heard her screaming and called for help, her mother said.

Soldiers complained about mold and temperature control problems in the barracks.

Residents of Camp Humphreys gave commanders an earful Friday during a town-hall meeting about housing woes on the U.S. military’s new headquarters base in the rural area of Pyeongtaek, about 55 miles south of Seoul.

Military and housing officials, who seemed surprised by the severity of some of the complaints, responded swiftly by sending people to check on the situation the next day.

But many in the audience asked how the problems were allowed to occur considering many of the facilities are new and touted as state of the art.

The meeting, held in the Four Chaplains memorial chapel, was part of a military-wide outreach effort seeking feedback from soldiers and their loved ones following congressional testimony and media reports revealing dangerous conditions on bases in the United States.

He defined those as problems that could cause harm and said Camp Humphreys had no work orders in that category.

Similar forums have been scheduled on other bases in the region, including Yongsan Garrison in Seoul on Wednesday.

Airing concernsDuring the Humphreys town hall, soldiers and civilians took to the microphone to complain about slow responses to work orders, mold, a lack of hot water, inability to control temperatures and entry doors that don’t reach the floor.

Malfunctioning elevators, including in the new housing towers, emerged as one of the most serious issues.

“I’ve been stuck in the elevator many times, both me and my family,” said Chief Warrant Officer 2 William Uhila of the 65th Medical Brigade.

“Somebody is going to die in that elevator. I just want to express that.”

Many of the problems listed Friday echoed those at other bases, but efforts to fix things at Camp Humphreys are complicated by the fact that they often have to be channeled through South Korean contractors due to an agreement that dates back to 2004.

The $10.7 billion sprawling base is the centerpiece of a frequently delayed plan to relocate most U.S. forces south from bases in Seoul and near the front lines with North Korea.

South Korea agreed to fund most of the construction and provide the labor that has turned the former helicopter outpost into a small American town.

President Donald Trump toured the Army garrison during his visit in November 2017 as his South Korean counterpart Moon Jae-in sought to show off the investment to offset U.S. demands that Seoul pay more for its own defense.

The move was originally supposed to occur in 2008 but was postponed several times in large part due to quality control concerns. It was expedited over the past few years and the population has nearly tripled to some 32,000.

But key facilities have not been completed, including the new hospital, a secure operations center and a new tarmac and super-hangar for the 2nd Combat Aviation Brigade. Some barracks also remain under scaffolding.

Once accepted into the garrison, buildings are under a two-year warranty during which time South Korean contractors are responsible for repairs, officials said.

Shawna Worley said her 10-year-old daughter was stuck in an elevator for 45 minutes before somebody heard her screaming because the help button didn’t work.

“The fire department had to come and rescue her,” Worley said during the town hall on Friday.

Worley said Sunday that the help button has been fixed, and a crew came to her building over the weekend to check out the other issues.

Garrison commander Col. Scott Mueller said that one problem was that some of the original South Korean construction companies had gone out of business, making it difficult to get parts.

‘The mold smells a lot’Spc. Nizika Wilson, a 22-year-old assigned to the 194th Combat Sustainment Support Battalion, has the number for maintenance programmed into her phone because she has to call them so often.

She described problems including temperamental heaters and a single stove for the whole building that doesn’t work.

But her biggest concern was mold.

“A lot of our soldiers and our NCOs have a lot of mold, and we have a leakage issue so at certain times the sinks or toilets or showers get flooded,” she said. “The mold smells a lot.”

Due to a lack of capacity, many soldiers and civilian employees live off-post in government-leased housing that also drew several complaints.

One man who lives in a neighborhood known as Riverside said children are exposed to sewage that often backs up during the monsoon season.

U.S. Forces Korea commander Gen. Robert Abrams explained that the Army Corps of Engineers, which oversaw the expansion project, could not do quality checks until 80 percent of the project was complete according to the bilateral agreement.

The hospital and some other facilities have failed that test in the past, forcing the builders to go back and fix things even if that meant starting from scratch.

“We’re actually at the mercy, if you will, of those contractors,” he told the audience.

The four-star later clarified that he understands why South Korea wanted the oversight since it is making such a huge investment in the base.

“We can provide feedback, which we do. We have direct access and we’re pretty aggressive about it,” he told Stars and Stripes. “I was really driving home the point that this is not the garrison’s fault and it’s not our Corps of Engineers’ fault.”

Abrams said he has raised the issue with South Korea’s defense minister, who has been very receptive in trying to address the problems.

“There’s gonna be normal growing pains, but I don’t want to minimize,” he added. “Some of the challenges we heard tonight from our families.These are real challenges that have to be immediately addressed.”