From a phone call, interrupted, emerged two sides of Japan’s most powerful earthquake 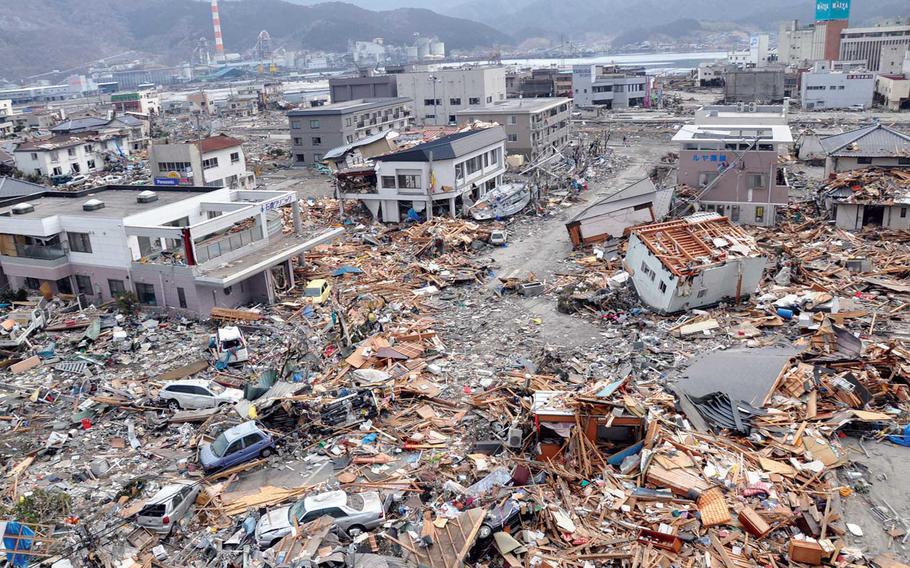 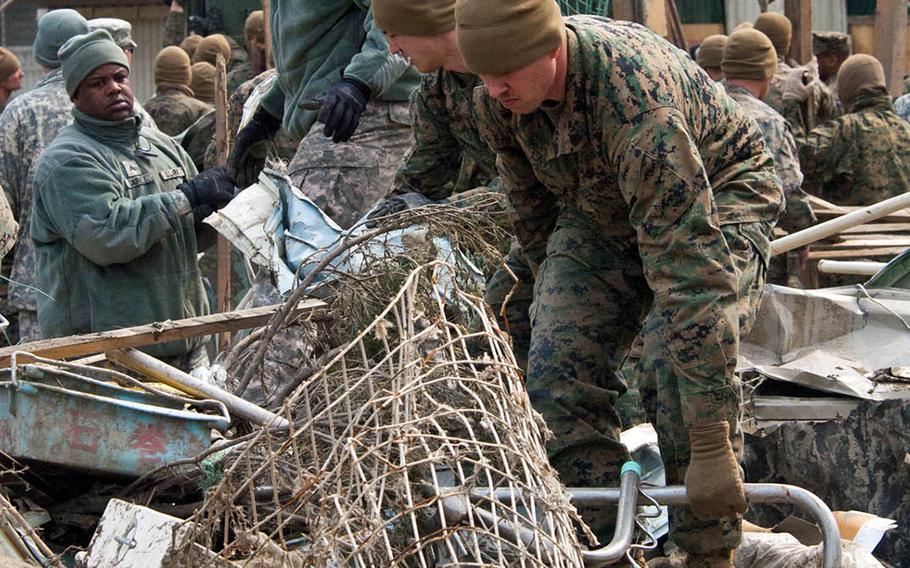 TOKYO — Former Stars and Stripes journalist Grant Okubo remembers being on the phone with a colleague at Misawa Air Base when bottles started shaking in his home near Yokota Air Base in western Tokyo.

“It was the longest earthquake I’d ever experienced, but it was the same as a few others,” said Okubo, who was an Army sergeant and photographer for the paper when the quake hit March 11, 2011. “I wasn’t completely shocked.”

But the ground kept shaking, those wine and liquor bottles fell off his refrigerator and then Okubo saw “crazy” scenes on TV from Sendai city, population 1.03 million, northeast of Tokyo and 80 miles west of the epicenter offshore.

The Great East Japan Earthquake registered magnitude 9, the largest ever recorded in Japan, according to the U.S. Geological Survey. Accounts vary but the ground shook, depending on location, for up to six minutes.

Within 35 minutes of the quake, a tsunami arrived at the northeastern coast of Japan. The advancing water stood 60 feet high in some areas when it struck the prefectures of Fukushima, Iwate and Miyagi.

More than 19,000 lives were lost, the vast majority taken by the tsunami. Another 2,600 are unaccounted for. About 320,000 people at one time were in temporary shelters, and after nine years nearly 6,000 people were still considered displaced, the Asahi newspaper reported in March 2020.

Not the least of its consequences, the tsunami disabled the cooling system at the Fukushima Daiichi nuclear power plant and caused three nuclear cores to melt down, the worst nuclear-power accident since Chernobyl in 1986.

At Misawa, Tim Flack felt the shaking, too. He grew worried enough to exit the building where he worked as a reporter for Stars and Stripes.

“I remember thinking to myself, ‘this isn’t one of the normal earthquakes,’” he said by phone March 4, “‘this is something a lot bigger and a lot scarier.’”

Outside, he heard children, crying, exiting the nearby arts and crafts center. Light posts shook. Across the street, a wall of water burst through the front door of the natatorium and cascaded down the steps, he said.

“That’s when I started thinking this isn’t what I’m used to,” he said. “It was a surreal experience.”

Along with other Stars and Stripes journalists, the pair covered the aftermath from north and south, Okubo from Yokota Air Base, his home office, and Flack from Misawa.

Flack rode along with search-and-rescue parties and later with a Navy helicopter crew bringing supplies to stranded survivors. Okubo documented the scene at Sendai and portions of Operation Tomodachi, the U.S. military relief effort.

Ten years later, they recalled their most significant memories of the event.

‘A post-apocalyptic movie’Okubo went to Sendai and Fukushima several weeks after the quake and tsunami to document relief progress. At its peak, Operation Tomodachi lent 24,000 personnel, 189 aircraft and 24 Navy vessels to the recovery effort, joining nearly five times that number of Japan Self-Defense Force personnel, aircraft and vessels.

“When we landed at Sendai, the airport, I mean it was still a ghost town,” Okubo said. “The security checkpoint, where you normally went through the metal detectors, all the garbage and debris were piled up there.”

Okubo compared the event to his experience in Iraq from 2007-09 and at Fort Polk, La., where he was stationed during hurricanes Katrina and Rita in 2005.

In Louisiana, “there were houses covered, almost underneath water,” he said. “At Fukushima, the water, in the aftermath the water had receded, but you could see the remains of what had occurred.”

At Sendai, Okubo said, he saw shipping containers along the beach, capsized boats, fallen trees. Yet the place seemed empty.

“I could relate to it to a degree,” he said. In Iraq he saw something akin to such destruction: collapsed buildings, ruined roads and the power grid destroyed.

“There was a lot of similar destruction to some extent in Sendai. It felt like a post-apocalyptic movie or zombie movie,” he said. “You recognize the setting.”

Defining momentsIn Misawa, Flack’s first priority turned to his wife, Kazumi, and their three young daughters. Not long after the quake, warnings were broadcast of a possible 18-foot-high tsunami.

“My initial instinct was to protect the family,” he said. “Once they were safe and sound the reporter instinct kicked in.”

He accompanied search-and-rescue teams from Los Angeles and Virginia that arrived quickly to look for survivors in a town south of Misawa. Normally a two-hour drive, that day it took many times that, Flack said.

“The crews were confident that if there were survivors, they would find them,” he said. “The crews we went with did not find survivors.”

Instead they marked the sites of likely remains and recorded their GPS coordinates.

Two weeks after the quake, Flack boarded a Seahawk helicopter whose crew searched the battered coastline for isolated survivors and brought them food, blankets, warm clothing and other supplies. Flack wrote up the trip for the March 23, 2011, edition of Stars and Stripes.

At one city center, the air crew found a well-organized cluster of survivors that had prepared a list of the things they needed. The helicopter flew to the aircraft carrier USS Ronald Reagan, dispatched to Operation Tomodachi, where the crew took on supplies, returned to the scene and unloaded.

The supplies the survivors needed most — kerosene and gas to run heaters and generators — could not be carried by the helicopters, Flack said.

Nonetheless, “the Japanese people lined up in a chain to the edge of the helicopter and unloaded,” he said. “They were very thankful.”

Ten years afterA decade later, Okubo said the yearlong coronavirus pandemic brought to mind how the Japanese people proved resilient in the disaster’s aftermath, ordering their lives in the ruins and coping with shortages and outages, even in Tokyo.

“It wasn’t like one or two days later, but they had done a lot of work to bring order. Even the debris was very orderly. I expected to see that,” he said.

Flack returned to Misawa from reporting assignments to find the base population turning out to help their Japanese neighbors clean up, he said. That project, Misawa Helps, started unofficially.

“About 2,000 people in the first four, five weeks, worked their way across the area,” he said. “It was hard work, and not ideal weather. It was just manual labor. Some folks went every day. They just wanted to do whatever they could to help.”

Neither Flack nor Okubo have returned to the Tohoku region. Flack, who now works in Army public affairs at Camp Zama outside Tokyo, said the pandemic put his plans on hold.

“There was one city I visited with Misawa Helps and had taken a photo of a service member digging through debris; in the background was a torii that was not destroyed,” he said.

“I don’t know how long that stood there but it survived the tsunami,” Flack said. “I want to see how they’ve rebuilt and what they’ve done since then.”

Okubo, who works in Army public affairs in California, said covering the aftermaths of war, of hurricanes, an earthquake and tsunami put life’s lesser events into perspective.

“When I went up to Sendai, and flew over Katrina, I realized that I was pretty lucky,” he said. “The military, there are pluses and minuses, but one thing it does is help you deal with a stressful situation. I definitely walked away a lot of times – and that time – feeling thankful for what I had.”