French, US, Japanese and Australian forces team up for beach-storming drills in Japan 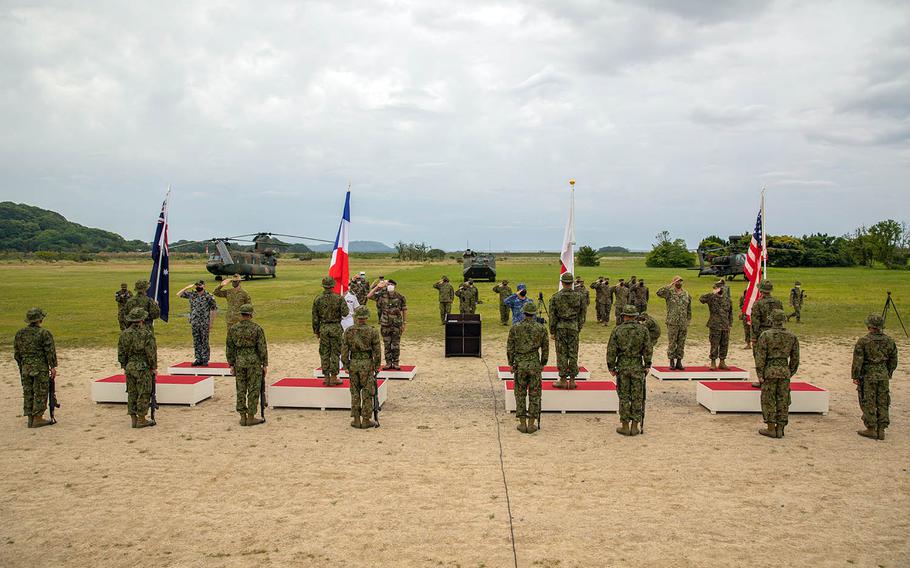 French forces are training on Japanese soil for the first time during drills this week that will include beach raids alongside U.S. Marines and Japanese amphibious troops supported by an Australian frigate.

The brigade, modeled on U.S. Marines, has about 100 people in the exercise, including infantry, engineers and command and control troops, according to Marine Capt. Thomas Delaney, a firepower control team leader on Kyushu.

Japanese special operations troops are acting as scouts during the training, he said in a telephone interview Tuesday.

About 60 Marines from the Okinawa-based III MEF are on Kyushu for the event including forward observers and radio operators in Delaney’s team, Delaney said.

The Marines will call for simulated fire from Australia’s Anzac-class frigate HMAS Parramatta, which is off the coast, he said.

The training begins with a staff exercise and culminates in a field exercise over the weekend focused on capturing a simulated island at the Kirishima Range complex on Kyushu’s coast, Delaney said.

French Foreign Legion infantry, engineers and command and control troops are also on the island, he said.

The Tonnerre can carry 16 heavy or 35 light helicopters plus a third of a mechanized regiment with 70 vehicles and 450 soldiers ferried to land by onboard barges or hovercraft.

The exercise comes amid heightened Japanese concerns over its southern Senkaku Islands. Japan and the U.S. have vowed to defend the chain, which is also claimed by Taiwan and China.

Australia has also clashed with China over the communists’ efforts to gain influence Down Under. France has a colonial history in the region and still controls territory in the Pacific and Indian oceans.

The French warships visiting Japan made a coordinated navigation in the South China Sea with an Australian task group in mid-April, Duhomez said.

The Kyushu exercise is the first time that French army units have trained on Japanese territory, he said.

The event reaffirms “our willingness and capability to protect our sovereign interests in the [Indo-Pacific]” and illustrates “French capability of Force projection in this region,” he said.