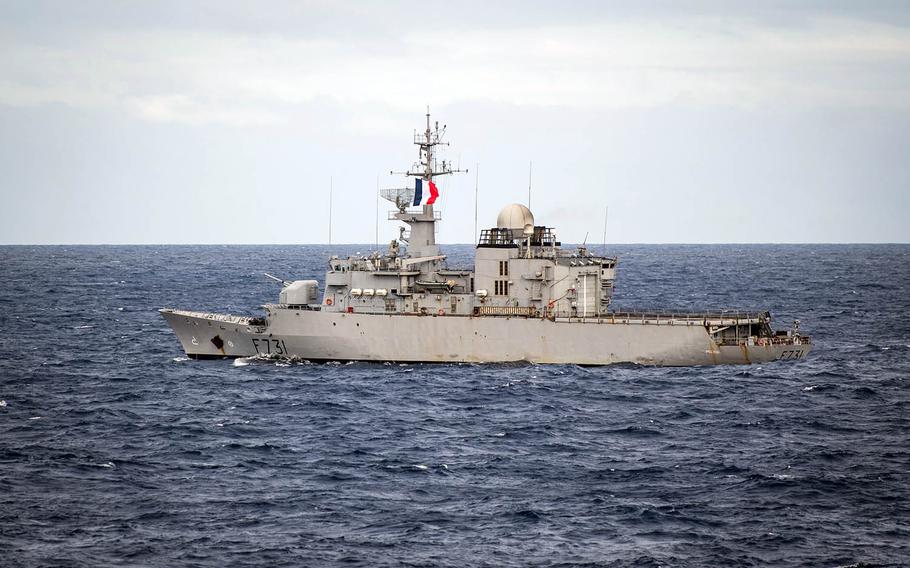 The French navy frigate Prairial takes part in the Rim of the Pacific exercise near Hawaii, July 26, 2018. (Devin Langer/U.S. Navy)

TOKYO — A French navy frigate will patrol the East China Sea until early March as part of United Nations efforts to enforce sanctions on North Korea, according to Japan’s Ministry of Defense.

The frigate Prairial will look for illicit ship-to-ship transfers of goods by North Korea, whose commerce is shackled by the U.N. until it dismantles its nuclear weapons program.

The U.N. since 2006 has passed almost a dozen resolutions aimed at North Korea, including bans on sales or purchase of military equipment and the export of electrical equipment, coal, agricultural products and other goods, according to the Council on Foreign Relations.

This is the second time since 2019 that a French vessel has patrolled in the East China Sea, the ministry said on its website Thursday.

Japan welcomes France’s contribution toward dismantling North Korea’s nuclear weapons and ballistic missiles of all ranges in a “complete, verifiable, and irreversible manner,” according to the ministry.

The Japan Maritime Self-Defense Force and coast guard will cooperate with other nations enforcing those sanctions and gather information on vessels suspected of making illegal transfers with North Korea, the ministry said.

The Prairial took part in a refueling exercise with the U.S. Navy and JMSDF on Friday in southern Japanese waters, according to a JMSDF news release.

European countries are increasing their presence and cooperation in the Indo-Pacific region due to rising concern over China’s military buildup and its military activities.

A French nuclear-powered submarine conducted a covert patrol in the South China Sea earlier this month and France plans to deploy its amphibious assault ship to Japan later this year, according to the Kyodo News service.