French forces ramp up their Indo-Pacific presence with multinational training 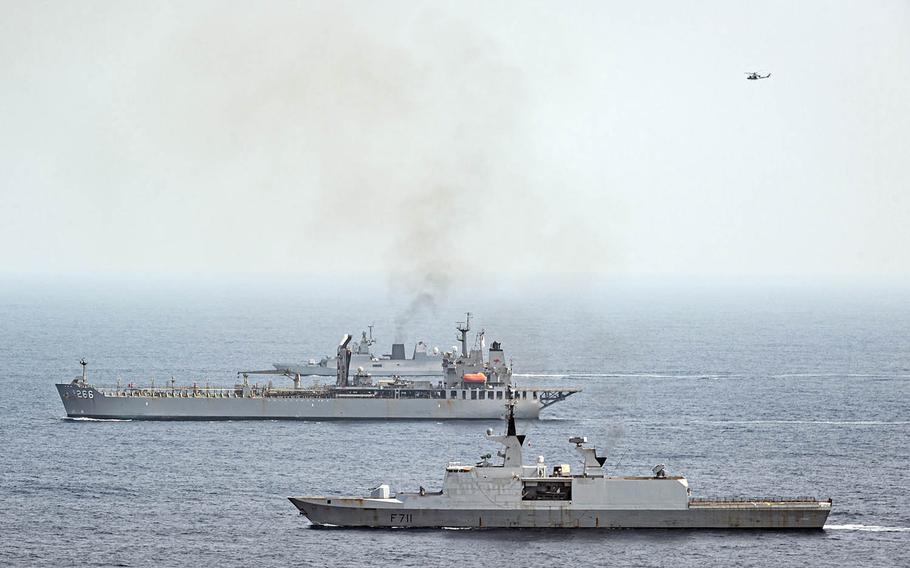 Vessels from France, the United States, Australia, India and Japan kicked off the three-day Exercise La Perouse in the Bay of Bengal on Monday, April 5, 2021. (U.S. Navy)

The French navy is drilling with U.S. and allied forces in the Indian Ocean as French soldiers prepare to train alongside U.S. Marines and troops in Japan.

Vessels from France, the United States, Australia, India and Japan kicked off the three-day Exercise La Perouse in the Bay of Bengal on Monday, Australia’s Ministry of Defence said in a statement a day earlier.

“Exercise La Perouse will … demonstrate the complementary capability of our partner nations and highlight our shared commitment to a stable and secure Indo-Pacific,” Australian Defence Minister Peter Dutton said in the statement.

The U.S. Pacific Fleet, in a statement Monday, said the USS Somerset, a San Antonio-class amphibious transport dock, is participating.

The training sends a message to potential competitors that the U.S. is willing to work with and support nations committed to the free flow of commerce, the Somerset’s commander, Capt. Dave Kurtz, said in the statement.

India’s Hindustan Times reported Friday that the French warships — the Tonnerre, an amphibious assault helicopter carrier, and the Surcouf, a La Fayette-class frigate — are participating.

Meanwhile, Japan’s Kyodo News agency reported Monday that the French army will join U.S. Marines and members of the Japan Ground Self-Defense Force for joint drills at Kirishima training ground in southwestern Japan in May.

Those drills will involve troops moving in helicopters and may also include urban combat, the agency reported quoting an anonymous source.

Japan’s rapid amphibious deployment brigade, which is tasked with defending remote island territories, will be part of the exercise, the agency reported.

A JGSDF spokesman on Monday confirmed plans for training involving U.S., Japanese and French troops but said details, such as the units that will participate and training locations, are still being considered.

It would be the first time that the three militaries had trained together in Japan, the spokesman said. Japanese government spokespeople typically ask not to be quoted by name.