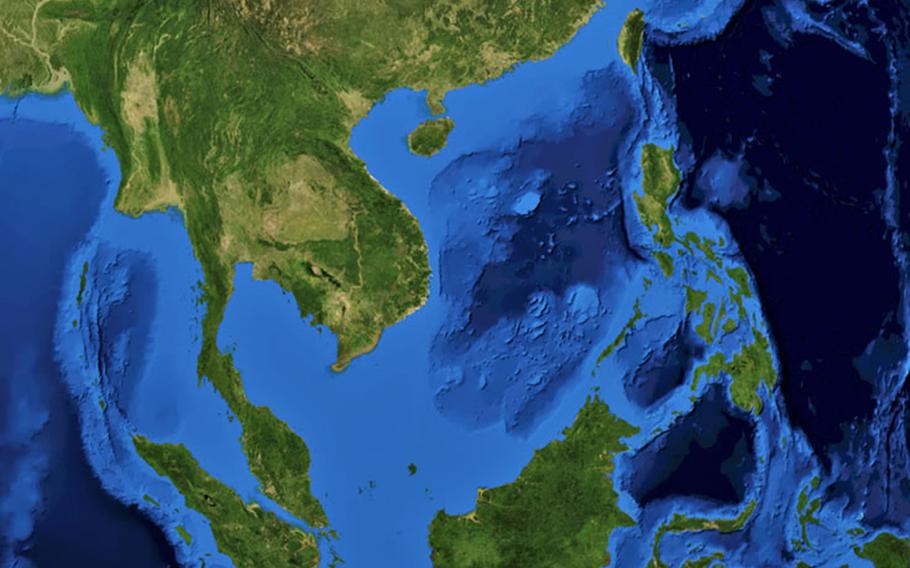 The U.S. regularly challenges Beijing's claims in the South China Sea by sailing warships within 12 nautical miles of islands that China has built up in the Paracel and Spratly chains. (Illustration via Pixabay)

It’s too late to constrain China’s creeping militarization and sovereignty claims over dozens of islands and reefs in the South and East China seas, experts say.

China’s island-building and militarization efforts began early this decade. It now claims dozens of islands and reefs in the Paracel and Spratly islands west of the Philippines. The United Nations does not recognize China’s territorial claims, which overlap claims in the same area by Indonesia, Vietnam, the Philippines, Malaysia and Taiwan.

The U.S. regularly challenges Beijing’s claims by sailing warships within 12 nautical miles of islands that China has built up in the Paracel and Spratly chains. So far this year, the Navy has picked up the pace, conducting at least five freedom-of-navigation operations, or FONOPS, since January: one each through the Paracels and Spratlys, and three through the Taiwan Strait, the latest March 24-25.

That’s half as many operations in three months as the Navy reported conducting in all of 2018. The Navy does not publicize all of those operations, however.

Nonetheless, sailing through those seas — or flying above them as the Air Force had done with B-52 bombers at least three times in March — is probably too little, too late, said security analyst Paul Buchanan, an American, of 36th Parallel Assessments, a private, nonpartisan, strategic analysis consulting firm based in New Zealand.

“The horse has bolted,” he said during a January interview with Stars and Stripes. “The days of confronting the Chinese are long gone. It should have been done 10 years ago. Island-building has enabled [China] to claim possession of the South China Sea.”

On that point, Masayuki Tadokoro, a professor of international relations at Keio University, agreed.

“It is too late to attempt to control China,” Tadokoro said during a panel discussion March 7 sponsored by the Japanese Ministry of Foreign Affairs.

“If we are to contain China now, it is almost impossible because of the economic importance of China and also China’s geopolitical presence” in the South China Sea, Tadokoro said.

Free trade Conceding the South China Sea to China would imperil free trade in an economically important region, Buchanan said. About $3.37 trillion worth of goods — 21 percent of all global trade — passed through the area in 2016, according to the Center for Strategic and International Studies’ China Power project.

In that area alone, China has claimed 27 reefs and islands, building outposts for military and civilian personnel on 12 of them since 2014, according to the center’s Asia Maritime Transparency Initiative. Many of what were once bare reefs and uninhabited islands are now military bases, some with missiles, warship docks and landing strips.

Buchanan said Beijing could continue to allow free transit of the South China Sea to benefit trade, but, so far, has treated the sea as its own.

A January report by the U.S. Defense Intelligence Agency, “China Military Power,” said China aims to strengthen its control over disputed areas, enhance its presence and challenge other claimants.

“China’s maritime emphasis and concern with protecting its overseas interests have increasingly drawn the [People’s Liberation Army] beyond China’s borders and immediate periphery,” the report said.

Freedom of navigation To challenge those moves, the U.S. Navy in 2017 conducted at least six freedom-of-navigation operations, including two in the Paracel Islands, one in the Spratly Islands and the remainder described generally as in the South and East China Seas, according to a Defense Department report that year.

The U.S. routinely explains that its freedom-of-navigation operations are intended to “challenge excessive maritime claims,” though Navy public affairs statements in the wake of those operations rarely tread into details.

However, the 2017 Defense Department report stated that China claims areas around the islands and reefs to which they are “not so entitled” and expects “prior permission” for “innocent passage of foreign military ships” through those areas.

Expecting China to abandon its claims is unrealistic, said retired Chinese Navy Capt. Liu Xiaobo in a March 1 analysis for the Center for Strategic and International Studies, a bipartisan, nonprofit think tank in Washington, D.C.

While freedom-of-navigation operations have been part of U.S. defense strategy around the world for decades, Buchanan said it needs to do more.

Getting tough That means a tougher approach — even if it brings a hostile response, he said in an interview March 22. For example, the Navy could increase the frequency of its freedom-of-navigation patrols and send warships deeper into the 12-nautical-mile radius around the islands and reefs that China claims, he said.

The Navy is “not getting really close to the territorial limits that the Chinese claim. If you wanted to press the point, you could drive way into those territorial waters and see what happens,” Buchanan said. “I wouldn’t doubt that the Chinese would fire upon any warship that went in there.”

In September, a Chinese destroyer, the Luoyang, came within 45 yards of the USS Decatur near Gaven Reef, a Chinese-occupied territory in the Spratly Islands. The Navy called the maneuver unprofessional. The 7th Fleet commander, Vice Adm. Phillip Sawyer, on March 18 in Manila, the Philippines, said the incident does not change Navy plans for freedom-of-navigation operations, according to The Associated Press.

Buchanan said he doesn’t think the American public “has the stomach” for an armed conflict with China, but it will soon have to choose whether to fight or concede the Chinese claims.

China is building its military power with the addition of the Dong-Feng 21 and 26, so-called “carrier-killer” missiles. Beijing claims these missiles can strike a moving target on the ocean, a move that may counter the U.S. advantage in power-projecting aircraft carriers.

“The cost to any U.S. government of losing this hallowed symbol of U.S. military supremacy to an upstart power will be consequential,” Buchanan said. “The Chinese know this; they just need to pick the time to pick the fight.

“While the U.S. can still outgun [China] and have superiority over them, it’s incumbent upon the United States to make the move.”

Diplomacy The U.S. last year disinvited China from its Rim of the Pacific exercise in Hawaii, pointing to Beijing’s excessive claims. Similar actions could be expected, Schriver told the House Armed Services Committee on March 27.

“[China’s] activities in the South China Sea could be met with consequences elsewhere, as I think was the case with RIMPAC,” he said. “We are intent on making sure no one country can change international law per the norms.”

Liu said in his analysis that China should come to the bargaining table with the U.S. regarding some of its claims.

“Resolving divergent opinions over freedom of navigation through careful negotiation and amending domestic laws and policies on innocent passage or military use of the [exclusive economic zone], while seeming on their face to be concessions, would indeed be a path of major progress toward oceanic power for China,” he said.

In Washington, signs that more diplomatic approaches to address the issue are on the horizon. On Dec. 31, President Donald Trump signed into law the Asia Reassurance Initiative Act, which authorized $1.5 billion for military and diplomatic programs in the Asia-Pacific region.

In the law, Congress tasked the president with developing “a diplomatic strategy that includes working with United States allies and partners to conduct joint maritime training and freedom-of-navigation operations in the Indo-Pacific region, including the East China Sea and the South China Sea.”

The Navy regularly trains with allies and partners in the Pacific, working with countries such as Japan, the Philippines and Australia throughout the year. France and the United Kingdom have committed to sending aircraft carriers to the region, with the Charles de Gaulle setting sail last month. The Royal Navy’s HMS Queen Elizabeth will start its patrol in 2021.

The act also reiterated the U.S. strategic commitment to the freedom of navigation in the Pacific and the continuation of military freedom-of-navigation operations.

“It is the policy of the United States to conduct, as part of its global Freedom of Navigation Program, regular freedom of navigation and overflight operations in the Indo-Pacific region, in accordance with applicable international law,” the act states.