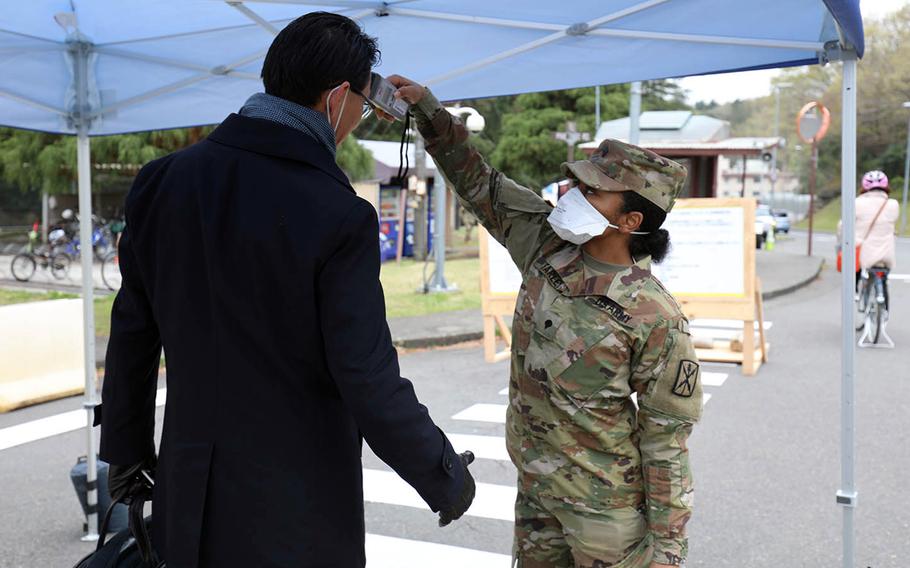 TOKYO — Four Japanese workers at Camp Zama have tested positive for the coronavirus, raising the total number of cases at the garrison outside Tokyo to half a dozen, a U.S. Army Japan spokesman said Wednesday.

“U.S. Army Japan can confirm six overall cases at Camp Zama, five of whom are host nation employees who work in a compartmentalized shift in one of our fire departments on Camp Zama,” Maj. Elias Chelala wrote in an email to Stars and Stripes.

U.S. Army Garrison Japan commander Col. Thomas Matelski informed the mayor of Sagamihara city about the new cases in a phone call Tuesday, according to a statement released by the city that day. Sagamihara borders Camp Zama and other installations that fall under the garrison, such as Sagamihara Family Housing Area and Sagami Depot.

Anyone with access to Army posts in Japan — including service members, U.S. and Japanese civilian employees and dependents — may travel only between their off-base homes and duty stations and must confine their off-base movements to a local area, according to an order issued by U.S. Army Japan commander Maj. Gen. Viet Luong on March 26.

The next day, the garrison reported its first positive coronavirus case, the dependent of a U.S. civilian worker. That patient had returned to Camp Zama from the United States before a March 25 stop-movement order from the Pentagon, Chelala wrote in his email.

“This dependent … was immediately placed on quarantine and has since recovered,” he said. “No other individuals associated with this person were infected.”

The garrison reported a second case, a Japanese worker, on April 10.

“When we received word of the first host nation positive case, we immediately took prompt measures to deep clean facilities and conduct contact tracing,” he said. “Based on our thorough assessment, we determined that there was no close contact between these positive cases and the rest of the [U.S. Army Japan] community.”

Matelski told the mayor that the U.S. dependent who tested positive had no connection with the Japanese workers who contracted the virus, Sagamihara city officials said in their statement.

The five fire department workers and other members of their team are staying home, the officials said. The Army has adjusted shifts for firefighters at Camp Zama, Sagami Depot and the housing area to maintain readiness.

Sagamihara had reported 69 coronavirus infections and three deaths as of Wednesday morning, according to data provided by the city’s disease control measures division.

The city has advised residents to stay home and reduce contact with neighbors, according to local officials.