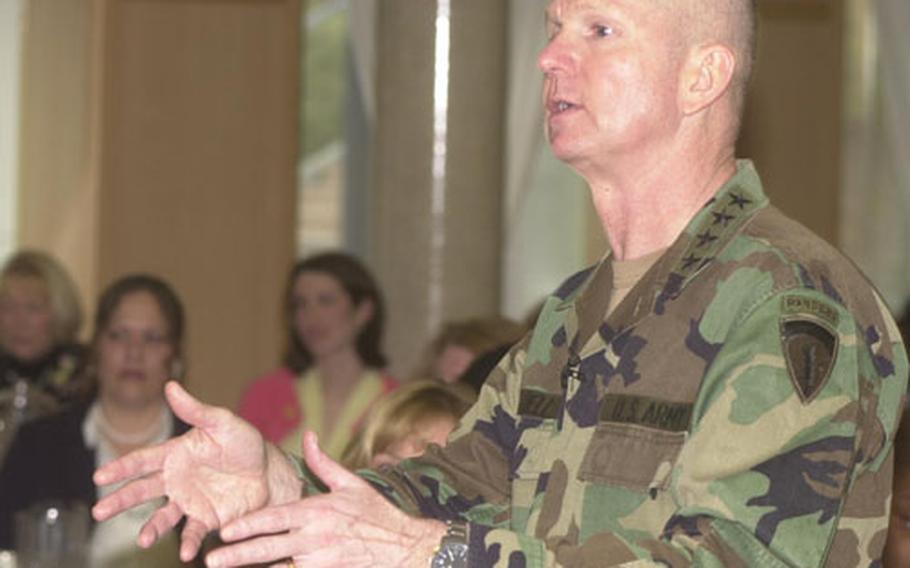 SEOUL — A former U.S. Forces Korea commander who argued for transferring wartime operational control of allied forces to South Korea now says that North Korea poses too great a threat for that change in responsibility to take place.

In a letter published last week by South Korean media, retired Gen. B.B. Bell said the OPCON transfer should be halted in light of the North’s recent nuclear threats, and the U.S. must offer Seoul the opportunity to “permanently postpone” it.

“America must lead, and this is the first step,” the letter said. “I feel deeply that the South Korean military is vastly superior to that of the North. However, once armed with nuclear weapons, the North will possess a capability that will put the South at a significant disadvantage on any future battlefield, or in any future negotiations.

“The nuclear issue with the North must be one of America’s primary national security issues,” his letter stated. “As long as the North remains nuclear weapons-capable, America should lead our combined military forces.”

Under the current command structure, the USFK commander, who also heads the United Nations Command and the U.S.-South Korean Combined Forces Command, would lead U.S. and South Korean troops if war broke out. A South Korean four-star army general serves as deputy commander of the CFC.

The planned OPCON transfer has been controversial in Washington and Seoul for years, given the threat posed by North Korea and varying opinions about whether the South’s military is capable of leading the fight should hostilities resume on the peninsula.

Following the publication of Bell’s letter, USFK said in a statement that the command “remains committed to OPCON transfer.”

“We will continue to work through planning the transfer to a Republic of Korea-led combined defense and remain on track and committed to the Strategic Alliance 2015 milestones,” the statement said.

A spokesman for South Korea’s Ministry of National Defense said the letter represented Bell’s personal opinion, and the ministry continues to prepare for the transfer to take place in 2015 as planned.

The transfer of responsibility originally was postponed from 2012 to the current target date of 2015 following criticism of the South’s response, or lack thereof, when North Korea sank one of its warships in 2010.

During his tenure, Bell — who served as USFK commander for 2½ years before retiring in 2008 — was one of the most vocal advocates of OPCON transfer, saying Seoul was ready to command troops from both countries should war break out.

“It is simply no longer necessary or appropriate for an American commander to lead the Korean military during wartime,” he said in 2008 during a seminar in Seoul.

However, Bell said in his letter last week that while North Korea’s exact nuclear capabilities are unknown, “from this point forward and as long as North Korea possesses nuclear weapons, I will no longer support OPCON transfer. ... Until the North completely terminates its nuclear program, it is now the responsibility of the U.S. to the lead the military effort to deter or, if necessary, defeat the North.”

Ohm Tae-am, a global strategy expert at the Korea Institute for Defense Analyses, said Seoul is unlikely to postpone the transfer again because of the current tensions with the North, though it will place an emphasis on close cooperation with the U.S. military.

“We have two years left, and the South Korean military is making progress in our preparations for wartime control,” he said. “In this situation, the South Korean government will not delay or postpone it.”