A military family was checked for smoke inhalation after a fire destroyed their home at Yokota Air Base, Japan, Tuesday, March 23, 2021. (Lydia Christy)

A military family was checked for smoke inhalation after a fire destroyed their home at Yokota Air Base, Japan, Tuesday, March 23, 2021. (Lydia Christy) 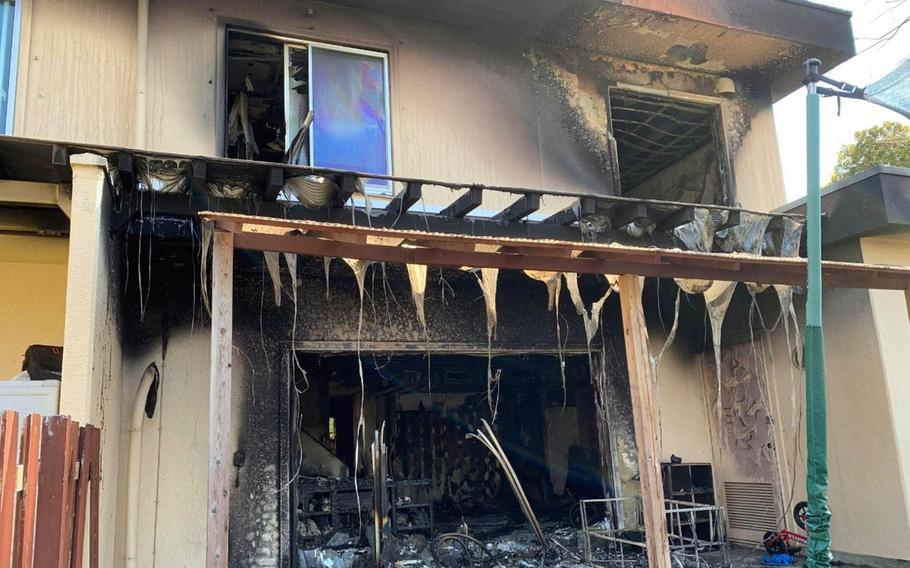 A GoFundMe page has garnered thousands of dollars in donations for a military family whose home at Yokota Air Base, Japan, was gutted by a fire, Tuesday, March 23, 2021. (Lydia Christy) YOKOTA AIR BASE, Japan — Neighbors are supporting a soldier’s family who lost all their possessions, including a pet cat, in a Tuesday morning fire at the home of U.S. Forces Japan in western Tokyo.

The family of five was asleep on the top floor of their two-story garden apartment on Yokota’s east side when they were woken by a fire alarm shortly after 6 a.m., said Army spouse Lydia Christy, 26, of Indianapolis.

Her husband, Staff Sgt. Jacob Christy, who works for USFJ, saw flames coming from the downstairs living room and fought the blaze with a fire extinguisher, she said.

However, the fire grew more intense, even after he had used up the extinguisher.

“We had to get out onto the roof with the dog,” she said.

The couple and their three boys — Alex, 6, Mason, 5, and Emmett, 2 — found themselves waiting to be rescued by firefighters, who arrived with a ladder.

The family was checked for smoke inhalation at an off-base hospital, but all are fine, Lydia Christy said.

That afternoon the family’s apartment, at one end of a four-unit block, was a blackened wreck. Adjacent units appeared undamaged.

Christy was at a neighbor’s house where household items donated by neighbors were piled up near the front door.

“[Base officials] are finding us a new house to live in,” she said, adding that almost all of the family’s possessions were destroyed in the blaze.

Among the things they lost were photographs and items belonging to her late grandfather, she said.

“Firefighters and first responders quickly arrived on scene. The fire was extinguished at 6:30 a.m., and there is no further risk to other housing residents,” the message said.

A spokesman for Yokota’s 374th Airlift Wing, 1st Lt. Stuart Thrift, declined to provide further details, including a description of the damage or the fire’s origin.

It may have been caused by a space heater, Christy said.

Meanwhile, members of the Yokota community posted Facebook messages of support and requests for donations of meals, clothes, diapers, blankets.

A GoFundMe page for the family, which notes they also lost their beloved cat Watson in the blaze, had garnered $5,300 in donations by 5 p.m. Tuesday. Many people also pledged to provide the family with meals through the Meal Train website.

The family arrived at Yokota 2 ½ years ago and have made friends there, she said.

“It’s a pretty tight community,” she said of the east side housing area. “It’s like a small town. Everybody is a friend or familiar face.”