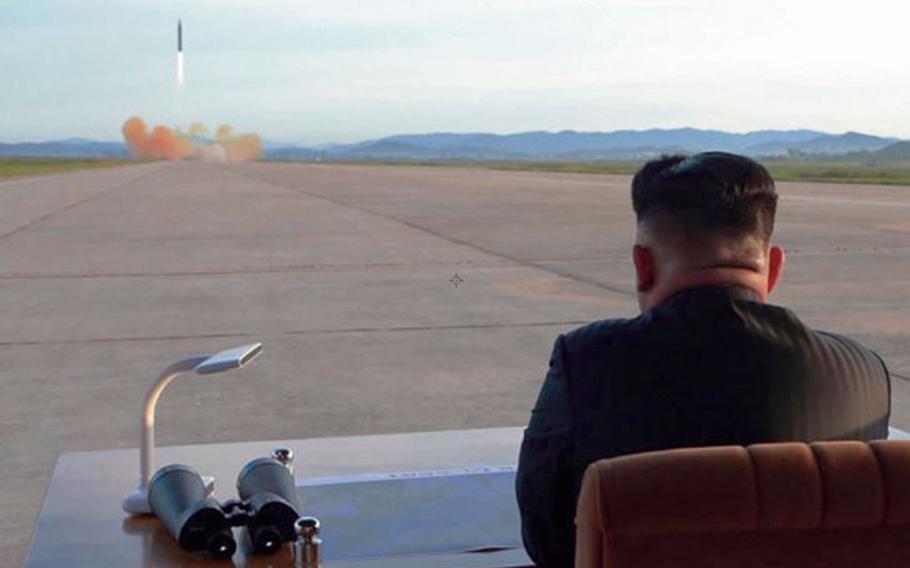 This image of North Korean leader Kim Jong Un watching a launch was released by the Korean Central News Agency a day after Pyongyang test-fired a missile over Japan on Sept. 15, 2017. (KCNA)

YOKOTA AIR BASE, Japan — Partner militaries monitoring United Nations sanctions on North Korea had to trim the number of missions this year by about two-thirds, thanks to the coronavirus pandemic, according to U.N. command staff in Japan.

Total missions by states that send troops to support the command’s mission, which include ships and aircraft operating out of U.S. military bases in Japan, declined to about 20 in 2020, the head of U.N. Command — Rear, Royal Australian Air Force Col. Adam Williams said in a Nov. 24 interview.

The U.N. Security Council has passed several resolutions sanctioning North Korea since the country conducted its first nuclear test in 2006. They apply to trade in such products such as military supplies, precious metals, luxury goods, coal and oil as well as financial transactions.

The council has authorized member states to seize, inspect, freeze and impound any vessel in their territorial waters illicitly providing oil to North Korea through ship-to-ship transfers, or smuggling coal and other prohibited commodities from the country.

Participating states sent more missions during 2016 and 2017 in response to North Korean provocations. After 2018, participating-state visits continued to grow with visits in support of sanctions-monitoring missions comprising about half of all of their visits to Japan, Williams said.

He referred questions about the exact number of missions to the U.S. 7th Fleet at Yokosuka Naval Base, Japan, which operates a multinational sanctions enforcement coordination cell.

However, the fleet declined to release that number for this year or previous years or disclose how many aircraft or warships were involved.

“The violations were observed in the East China Sea, Yellow Sea, and Sea of Japan,” he said.

The enforcement coordination cell has been monitoring and collating information on ship-to-ship cargo transfers in order to identify illicit transactions, he said.

The organization facilitates the exchange of the information with multinational partners and U.S. agencies to enable financial, law enforcement and diplomatic action, aimed at motivating North Korean to denuclearize, Keiley said.

The sanctions-monitoring missions are primarily supported by maritime patrol and reconnaissance aircraft and surface ships, he said.

This year, North Korea has stopped trying to hide its sanctions-busting efforts with ship-to-ship transfers and is shipping coal directly to China, according to a Dec. 7 report in The Wall Street Journal that cites U.S. officials and satellite photographs provided by the U.S. government.

However, reduced U.N. monitoring has coincided with North Korea closing itself off due to the coronavirus pandemic, Ralph Cossa, president emeritus of the Pacific Forum think tank in Hawaii, said in a Nov. 25 email.

“As the world returns to some degree of normal, I assume surveillance will also increase,” he said. “At some point [North Korean leader] Kim [Jong Un] will feel compelled to do something to remind the world he is still around and that will also result in increased surveillance.”