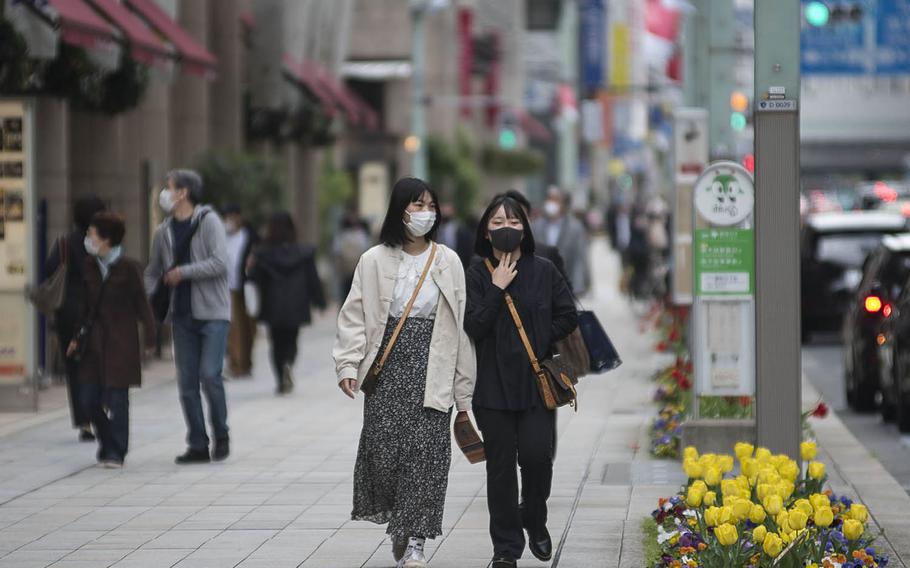 Sasebo Naval Base, on Kyushu island in southern Japan, had three people test positive Friday, the base announced via Facebook on Monday. One person fell ill with symptoms of COVID-19, the coronavirus respiratory disease, and two were close contacts of previously identified COVID-19 patients.

Sasebo last reported two coronavirus cases on March 10, both new arrivals in Japan who turned up with the virus while still in mandatory quarantine.

Tokyo on Monday reported 306 people newly infected with the virus, according to public broadcaster NHK. That is the highest Monday new-patient count since 393 cases on Feb. 1, according to metro government data. New cases exceeded 500 for three consecutive days last week.

Monday totals are typically the lowest of the week.

Tokyo, Kyoto and Okinawa prefectures imposed a state of emergency Monday for at least a month to curb the virus’ spread, media in Japan reported. Tokyo and three surrounding prefectures lifted a previous, 2 ½-month-long emergency on March 21.

Osaka, Hyogo and Miyagi prefectures have already imposed new curbs, including requests to bars and restaurants to close early, and asking residents to avoid unnecessary travel.

Osaka prefecture, home of Japan’s second largest city, on Monday reported another 603 people had contracted the virus, according to NHK. The prefecture last week reported its highest number of new patients since the pandemic began in March 2020. Osaka reported more than 900 new patients on Thursday and Saturday, according to prefectural data.

Restrictions ease in South KoreaU.S. Forces Korea reduced the coronavirus risk level Sunday for its installations in Seoul, including the Seongman district and Yongsan Garrison, to moderate, or Health Protection Condition-Bravo.

The Seoul metro region was the last to leave condition Charlie, or a substantial threat of the virus spreading, of all the USFK regions on the peninsula.

“USFK-affiliated individuals can now travel freely across South Korea without restriction, with the exception of bars, clubs, karaoke rooms, saunas, bathhouses, off-installation gyms and establishments that restrict entrance to adults only, which remain off-limits,” a USFK news release said.

USFK has vaccinated nearly half its community, according to the release.

South Korea imposed its own mask mandate Monday that requires everyone to wear an appropriate face covering while indoors, including on buses and trains, except while eating and drinking, according to South Korean news channel YTN.

Violators face a maximum fine of 100,000 won, or about $89, according to the Korea Disease Control and Prevention Agency.