Fate of US troops in S. Korea won’t be topic at summit, Mattis says 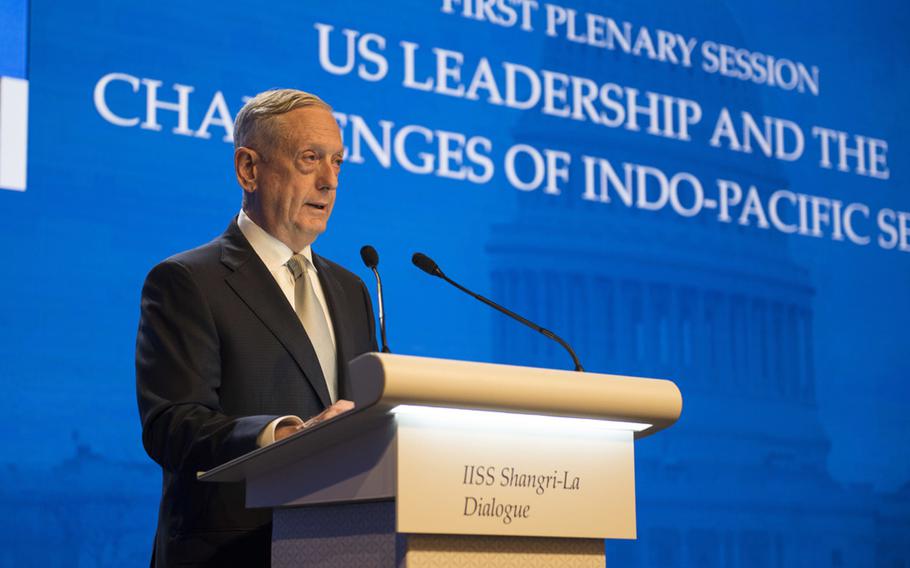 SEOUL, South Korea — The fate of U.S. troops in South Korea won’t be up for negotiation during President Donald Trump’s June 12 summit with North Korea, the defense secretary said.

Saturday’s comments by Jim Mattis came hours after Trump confirmed he would hold nuclear talks with Kim Jong Un in Singapore, reversing last month’s announcement that he was canceling the summit.

Underscoring the sensitivity of the issue, the North on Sunday renewed its criticism of Seoul for planning to join Washington in military exercises, despite the allies’ insistence that the drills are defensive in nature.

Mattis said “any discussion about the number of U.S. troops” would be between Washington and Seoul, and the issue was “separate and distinct from the negotiations that are going on with (North Korea).”

“That issue will not come up in the discussions with (North Korea) and as you all recognize, those troops are there as a recognition of a security challenge,” he said Saturday at an international security forum in Singapore.

Trump sought to lower expectations for the meeting, backing away from previous calls for the North to abandon its nuclear weapons program quickly in exchange for security assurances and other benefits.

"It will be a beginning. I don't say and I've never said it happens in one meeting,” he said Friday after meeting with Kim Yong Chol, the most senior North Korean official to visit the United States in 18 years. Kim delivered a letter from the North Korean leader.

“You're talking about years of hostility; years of problems; years of, really, hatred between so many different nations,” Trump said. “Now we’re going to deal, and we’re going to really start a process.”

In separate remarks Sunday, Mattis told his South Korean and Japanese counterparts that he hoped the diplomatic process would work but the militaries must remain strong.

“We can anticipate, at best, a bumpy road to the negotiations,” the defense secretary said at the start of a trilateral meeting on the final day of the Shangri-La Dialogue.

He stressed that international economic sanctions aimed at punishing the North for its nuclear activities would remain in place until a deal is made.

“North Korea will receive relief only when it demonstrates verifiable and irreversible steps to denuclearization,” he said.

The presence of some 28,500 American servicemembers in the South is the cornerstone of the alliance between the two countries that fought together against the communist-backed North in the 1950-53 Korean War.

Trump also said last month that the troop presence would not be on the table, although he added that he would like to “save the money” in the future. That suggests he may reconsider the issue as part of bilateral negotiations over cost-sharing with the South.

North Korea has demanded the removal of U.S. troops as a condition for peace in past negotiations. Officials say it hasn’t raised the issue in the current talks, but it canceled a high-level inter-Korean meeting to protest joint military exercises on the divided peninsula last month.

“The racket of seeking military confrontation with the compatriots in the north can never be justified as it is against the unanimous demand of all Koreans and the trend of the times,” the Korean Central News Agency said, citing a commentary in the Minju Joson newspaper.

North Korea regularly denounces the military exercises, which it considers rehearsal for an invasion, but such criticism takes on added significance amid the flurry of diplomacy.

U.S. troops in South Korea as well as on bases in Japan and Guam also are seen as a counterbalance to Chinese influence in the region.

A key reason China, the North’s main ally and economic lifeline, supports Pyongyang is to maintain a buffer zone between the Americans and its borders.

Mattis vowed to “hold the line” with South Korea as an ally and stressed the U.S. goal was the “complete, verifiable and irreversible … denuclearization of the Korean Peninsula,” according to a Defense Department transcript.

He acknowledged the issue of U.S. troops may come up in discussions with South Korea “if the diplomats can do their work — if we can reduce the threat.”

“But that issue is not on the table here in Singapore on the 12th nor should it be,” he added.

Some South Korean officials and politicians have suggested that U.S. troops would no longer be needed if peace with the North is achieved.

President Moon Jae-in has distanced himself from the idea, insisting that U.S. forces would not be part of peace negotiations.

Past U.S. administrations have had mixed success in changing the force structure on the divided peninsula, which remains technically at war since the 1950-53 conflict ended in an armistice instead of a peace treaty.

Former President Jimmy Carter tried to withdraw them after taking office in 1977 but failed after hitting a wall of opposition from his top aides.

Richard Nixon withdrew about a third of 60,000 servicemembers in 1971 despite strong opposition from the South.

George W. Bush shifted many of the troops to Iraq in the years after the U.S. invaded that nation in 2003. His father, George H. W. Bush, removed tactical nuclear weapons from South Korea in the early 1990s.