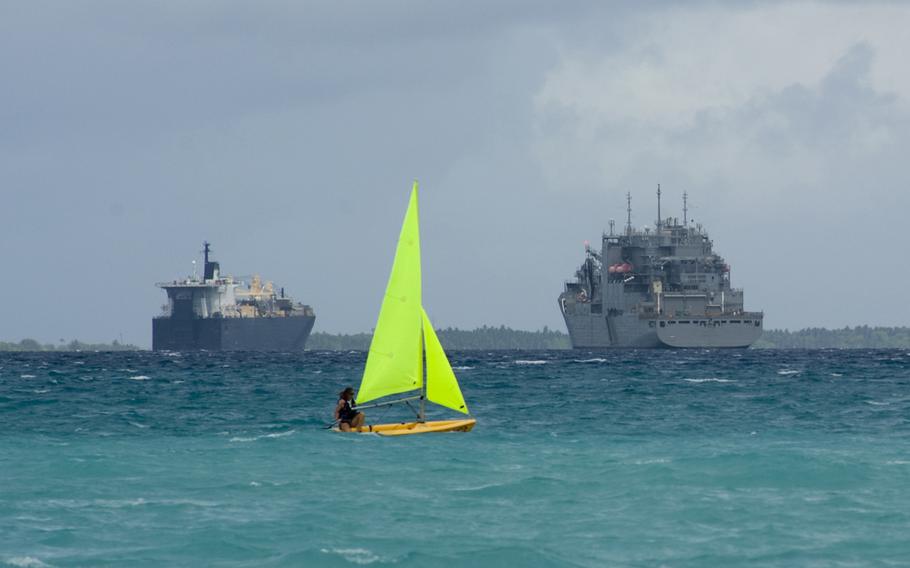 A sailor assigned to U.S. Naval Support Facility Diego Garcia relaxes on a Sunday afternoon by sailing on a Pico sailboat near the Morale, Welfare and Recreation Marina in this Nov. 2012 photo. (Ryan B. Tabios/U.S. Navy)

SASEBO NAVAL BASE, Japan — Swimming and other water activities were suspended at Navy Support Facility Diego Garcia after a U.S. Navy contractor was killed July 14 in a shark attack.

Navy officials declined to name the victim but said he worked for G4S Parsons Pacific, L.L.C., a Palm Beach Gardens, Fla.-based contractor involved in base operations support services. Several media outlets based in the Philippines identified the victim as 33-year-old Fernando Licay, a Filipino from Santa Clara, Calif.

The attack occurred about 25 feet from shore in a designated swimming area one mile from the downtown area of the base, according to base spokesman Petty Officer 1st Class Edward Vasquez. The man was bitten by a large dark shark that was allegedly between six and 10 feet long. Several co-workers witnessed the attack and entered the water to bring the man to shore. He was transported to the base’s Branch Health Clinic where he was pronounced dead after medical personnel spent 25 minutes trying to save him.

“He had extensive injuries from the attack,” Vasquez said. “We are all saddened by loss of victim, and thoughts are with family and friends.”

Base officials were unable to track the shark, Vasquez said. British and U.S. authorities are investigating in accordance with the applicable agreements.

Diego Garcia is a British Indian Ocean territory located along the equator, south of India.

Water sports are common amongst the base military population.