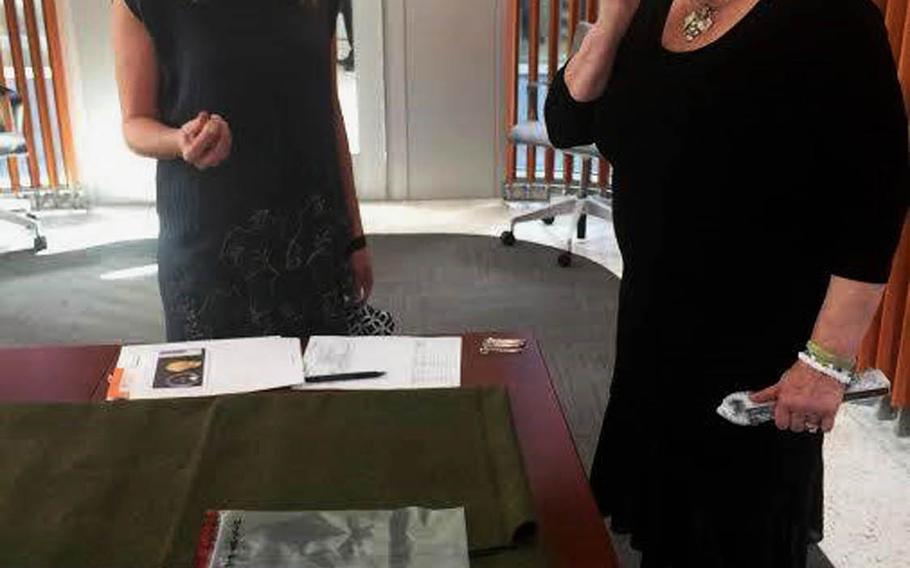 Wandra Raynor dabs tears as she and her daughter, Dona Stewart, examine the remains of her husband, Donald Steward, who died in a plane crash in Vietnam in 1965. The two women viewed the remains at the headquarters of the Defense POW/MIA Accounting Agency in Hawaii on Nov. 6, 2015, before flying them to his hometown for burial. (Courtesy of Steven C. Barber)

Wandra Raynor dabs tears as she and her daughter, Dona Stewart, examine the remains of her husband, Donald Steward, who died in a plane crash in Vietnam in 1965. The two women viewed the remains at the headquarters of the Defense POW/MIA Accounting Agency in Hawaii on Nov. 6, 2015, before flying them to his hometown for burial. (Courtesy of Steven C. Barber) 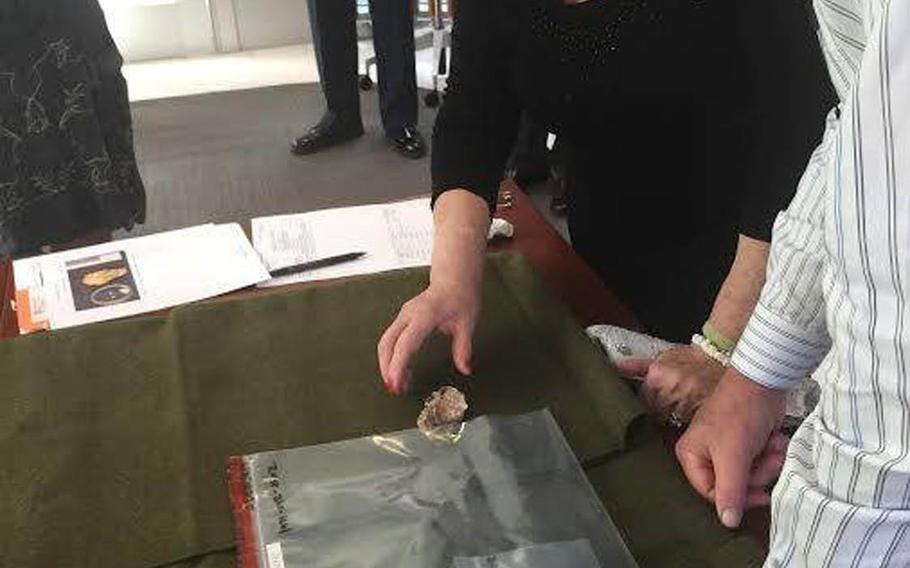 Wandra Raynor examines a bone fragment from the remains of her husband, Donald Stewart, Nov. 6. 2015, at the science lab of the Defense POW/MIA Accounting Agency in Hawaii. Stewart died in a plane crash in Vietnam in 1965. They had been married about a year and a half. (Courtesy of Steven C. Barber) 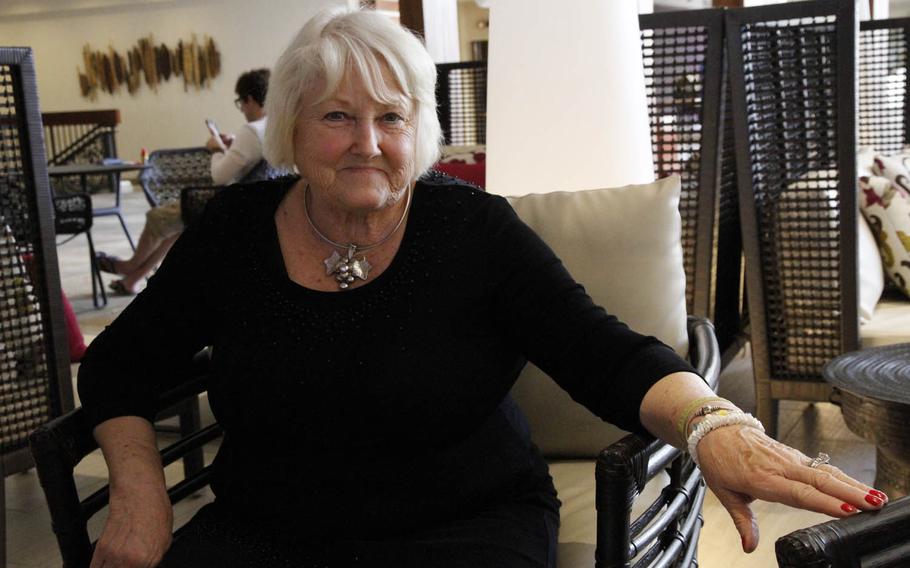 Wandra Raynor took a monthlong trip to Vietnam in 2007 to search for the remains of Donald Stewart, her husband who had died there in a plane crash in 1965. (Wyatt Olson/Stars and Stripes) 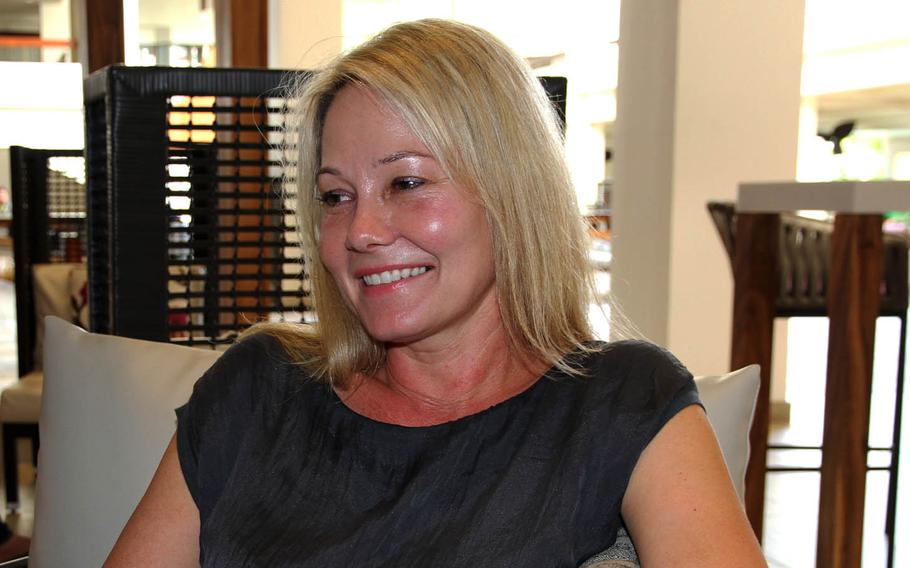 Dona Stewart was named after her father, Donald Stewart, who went missing in action in the early years of the Vietnam War. She grew up with questions about whether he might still be alive. (Wyatt Olson/Stars and Stripes)

FORT SHAFTER, Hawaii — For years, the widow and daughter of Staff Sgt. Donald Stewart were plagued by doubts about the airman’s 1979 funeral at Arlington National Cemetery.

Stewart, a load master, went missing in action in 1965 when a C-123 transport aircraft crashed on a mountainside in Phu Yen, a coastal province in Vietnam between Danang and Ho Chi Minh City, then known as Saigon. Three other Americans and 81 South Vietnam soldiers were also onboard.

“We didn’t hear a word for 14 years, and then in 1979, they called me from Randolph Air Force Base in Texas — about 10 o’clock at night — and told me that my husband’s remains had surfaced and we had to have a service in Arlington,” said Wandra Raynor, who was pregnant with their first daughter when Stewart, 28, went missing.

“I kept thinking, that doesn’t make up four people,” Raynor said. “It couldn’t be but three at the most. Or one or two.”

Raynor and her daughter, Dona Stewart, went to the Arlington ceremony and then moved on with their lives. Still, uncertainty nagged at them.

They laid their doubts to rest Nov. 6 during a visit to the Defense POW/MIA Accounting Agency in Hawaii where they held bone fragments proven by DNA testing to belong to Donald Stewart. They were the first family members to view their loved one’s remains in DPAA’s new science lab, which features a viewing room suspended two stories above an open-air courtyard, at Joint Base Pearl Harbor-Hickam.

“It was wonderful to hold them,” Raynor said the following day.

“It was very stressful on the drive there thinking about what you have to go through,” Stewart said. “But then they bring you to the family room, they show you the remains and give you time alone, and you can hold the bones. At that point, it was just a relief. I felt 100 pounds lighter.”

They had carried the weight of the unknown for many years, which, by the turn of the millennium they say, had morphed into a series of strange dreams and visions.

For Raynor, the dreams harkened back to one she had about a month before her husband died: She was looking down a tunnel at bamboo bars, surrounded outside by lush tropical greens.

“I kind of floated out of my body, and I was being shot at and running and there were some grass huts. And there were two people who took me inside,” she said.

Although she never met her father, Stewart — along with a half-brother and a stepbrother — grew up amid unanswered questions.

“We were always thinking when we were growing up, 'Is he alive? Is he being tortured?’ I’d hear my grandmother speak about it at the table. We just didn’t know,” she said.

Eventually, the mother and daughter shared their dreams of the lost airmen and felt compelled to take a trip to Vietnam in 2007, spending a month learning what they could about the crash site.

They hired a guide whose grandfather, serendipitously, had worked for the U.S. Air Force and knew where the plane went down. Stewart said they also found a man who, as a boy, was among the first to find the crash site. He had pulled a ring off the pilot’s hand and later sold it.

The guide told them the trip up would be too arduous for them, so they supplied the hired search group with a disposable camera and sent them on the three-day roundtrip hike to the site. The searchers returned “visibly shaken” with boots, teeth and other artifacts from the plane, Stewart said. “Because nobody had ever gone up there except the Vietnamese.”

“America had never been up there,” Raynor said.

After returning to the U.S., they met with officials from the MIA accounting agency, then called the Joint POW/MIA Accounting Command. The meeting included Johnie Webb, the agency’s liaison to families of missing servicemembers, who agreed that the accounting agency’s recovery experts needed to visit the site themselves.

A team visited the site, which over 50 years had been significantly scavenged, around 2012-13, Webb — now DPAA’s deputy to the commander for legislative affairs and external relations — told Stars and Stripes. But no excavation work was done because the Defense Department had officially “accounted for” all four crewmembers in 1979, and priority for excavation goes to sites believed to hold unaccounted remains, Webb said. The Stewart crash site “would be at the bottom of the priority list,” he said.

“At this point and time, nothing has been put forward that we should put a recovery team on that site,” he said.

Unknown to Raynor and Stewart for a long time, however, was that the accounting agency’s lab in Hawaii had for decades been holding a trove of commingled remains retrieved from the wreckage in 1974 by Vietnamese soldiers.

Those remains were transferred to a lab in Thailand, where large bone fragments believed to belong to Americans were removed, Webb said. In February 1979, the Graves Registration Office “approved those remains as the group remains of those four crewmembers, so no individual identifications, just group remains that represented the crew of that aircraft,” he said.

The rest of the remains were shipped to the Hawaii lab, where they were stored until they began undergoing DNA testing from 1997-2011, Webb said.

Stewart said she and her mother learned accidentally that the agency possessed the remains — a scholarly article made mention of them — and she sent a “nasty email” to the agency cajoling it to conduct DNA testing for her father.

The lab identified Stewart’s remains in December 2014 using DNA samples from his brother.

Webb said the Air Force had requested that the remains in Arlington be disinterred for DNA testing but “were not successful in getting approval” due to “the policy of the cemetery.”

Raynor and Stewart requested that the new remains be added to the Arlington gravesite but could not receive permission.

Instead, Donald Stewart was laid to rest Wednesday in a cemetery near Raleigh, N.C., the area where he grew up.

Raynor and Stewart’s journey is the subject of a forthcoming documentary by filmmaker Steven C. Barber.

Stewart said families of missing servicemembers end up struggling between finding closure or the truth.

“They try to give people closure by having these group burials without even having the remains, but for us it was more than closure. It was about the truth,” Stewart said. “Because I was living with this guilt that maybe he is alive and waiting for us to come back — who knows what goes through your mind?

“Until I could find the plane crash, I don’t know, I was looking for some kind of truth. Not closure, because I wasn’t going to get it until the remains were found.”