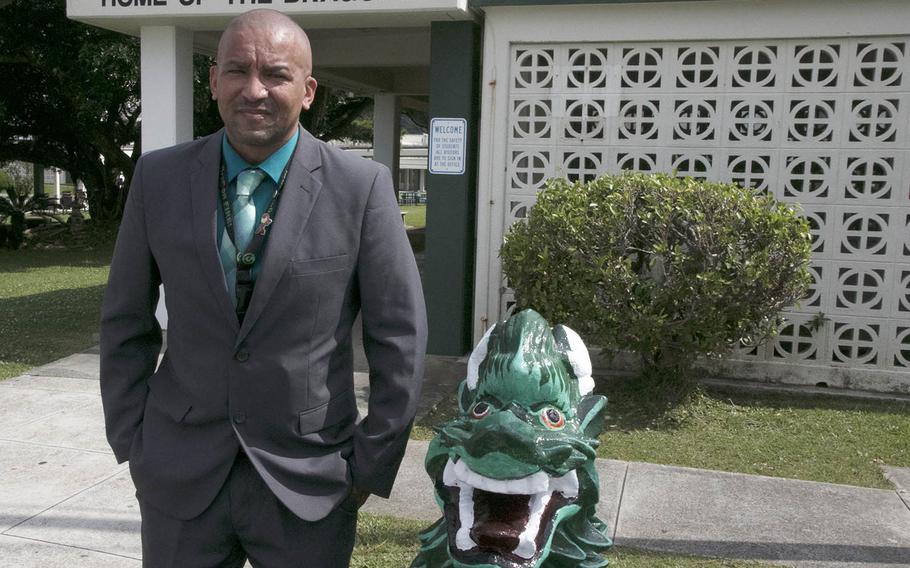 CAMP FOSTER, Okinawa – Principal James Strait has led Defense Department schools through a hurricane and a global pandemic, and his nine years of academic leadership have not gone unnoticed.

Strait, 51, a soldier-turned-educator in charge of Kubasaki High School at Camp Foster, a Marine Corps base on Okinawa, was named the 2021 Principal of the year by the Department of Defense Education Activity, according to a DODEA statement on April 20.

Strait was lauded for bringing the community together to support Kubasaki’s students and excellence in education.

Next, he’ll compete with middle and high school principals from the civilian world for the National Association of Secondary School Principals’ Principal of the Year award, DODEA-Pacific spokeswoman Miranda Ferguson told Stars and Stripes on Monday. The winner will be announced in October.

“Mr. Strait’s leadership has helped to revitalize and reinvigorate Kubasaki High School,” DODEA Pacific South District Superintendent Jim Journey said in the DODEA statement. “He has worked tirelessly with students, staff, and stakeholders to increase the sense of community, pride, and belonging at Kubasaki High School.”

Strait credits his students and staff for the honor, he told Stars and Stripes on Monday at the school.

Strait said he grew up in a tough inner-city community in San Antonio. He attended Bethel University in Minnesota, joined the Army his junior year and after graduating in 1994 served six years on active duty followed by 16 in the Reserves. He retired as a chief warrant officer four.

During his Army service, Strait deployed to Haiti in 1994 and twice to Iraq, he said.

Strait got his first job as a principal in Minnesota. He joined DODEA in 2012 and was assigned to Fort Campbell High School in Clarksville, Tenn., and then Ramey Unit School at Fort Buchanan, Puerto Rico, in 2015.

“It was pretty brutal,” he said.

When Strait took over as principal at Kubasaki in October 2019, the first thing he did was open a can of paint and take a brush to the 75-year-old school.

Strait said his leadership style is to tackle problems in a hands-on way to get buy-in from the community. It may be years before they get a new school, so beautifying it to make the student experience better was the first step.

“My philosophy is that every kid deserves a quality education,” he said. “It doesn’t matter their race, their education background or their special needs.”

Strait said he keeps an open-door policy with parents and teachers and has overseen early interventions when kids’ grades take a downturn. He also meets regularly with Marine commanders to listen to their concerns so he can solve problems and take as much pressure off deployed service members as possible. Their focus should be on the mission, he said.

Experience prepared him for the wrinkle posed by the coronavirus.

“I just think it’s another opportunity,” he said. “I try not to panic and just trust in the system and trust that DODEA will do their best to get the kids back on track.”

Going forward, Strait wants to start an academy for ninth-graders so they can learn the importance of education and what is expected of them and to increase minority participation in advanced placement classes.

“We’re dedicated to the students here,” he said.