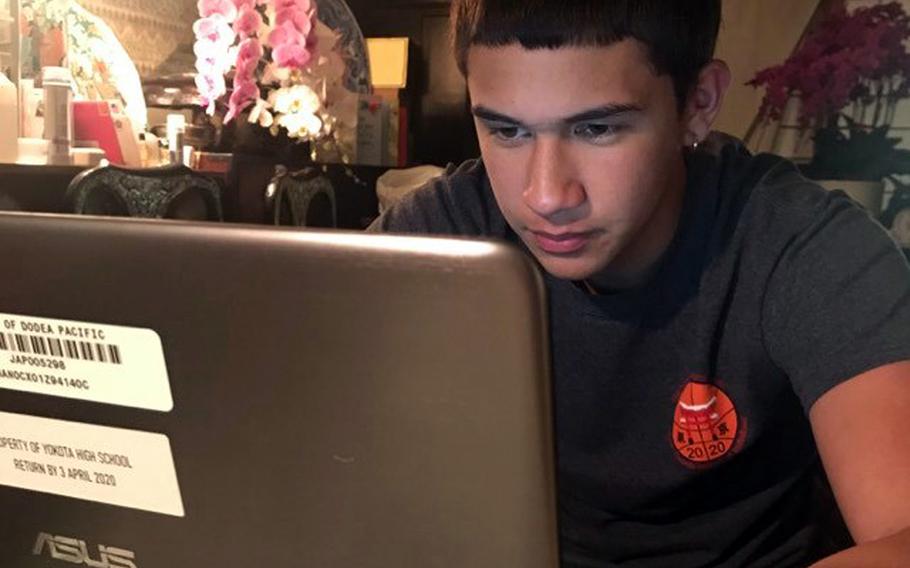 Connor Rowan, a junior at Yokota High School at Yokota Air Base in western Tokyo, takes an Advanced Placement exam in the wee hours of May 16, 2020. (Christine Kalina Rowan)

CAMP FOSTER, Okinawa — Some students at Defense Department schools in the Pacific say they are pleased that a class-action lawsuit has been filed against the College Board over its handling of recent Advanced Placement exams.

The suit — which seeks more than $500 million in compensatory and punitive damages, according to multiple media reports — was filed May 20 in federal district court in Los Angeles on behalf of students who ran into technical glitches when submitting their answers.

“I have been extremely frustrated with College Board throughout these last few weeks,” said Maria Fogell, the senior class president for Nile C. Kinnick High School at Yokosuka Naval Base, Japan. She took the AP statistics exam Saturday and reported problems uploading the results.

Because of the coronavirus pandemic, College Board administered the tests online for the first time between May 12 and May 23. The exams were also shortened from three hours to 45 minutes.

Citing security reasons, the board said the tests had to be administered at the same time worldwide, forcing students at Department of Defense Education Activity-Pacific to take them between 1 a.m. and 5 a.m. DODEA-Europe students tested between 6 p.m. and 10 p.m.

Cameron Murray, a senior at Kubasaki High School on Okinawa who’s enrolled in seven AP courses, said one of the many exams she took failed to submit. She must retake it on June 1, College Board’s designated makeup day.

“I hope this will seriously change the way the American education system emphasizes standardized testing above all else,” she said.

Connor Rowan, a junior at Yokota High School at Yokota Air Base in western Tokyo, said he took the AP U.S. history exam on May 16 and couldn’t finish on time. Rowan called College Board’s testing interface sluggish and said it took 20 minutes to open and review exam resources, leaving him only about 30 minutes to complete and submit the test.

The fact that College Board is being sued “confirms that I’m not the only one who felt the entire testing experience was frustrating,” he said.

Gio Cano, a junior at Marine Corps Air Station Iwakuni’s Matthew C. Perry High School in southwestern Japan, said he had trouble finding his entry number and signing in for an AP history exam but was able to finish on time.

“Not everybody has … the best equipment,” he said. “They should have known there was a chance there would be technical problems.”

DODEA, which pays $94 per exam per student, would not comment on the lawsuit because the tests are not administered by the agency, spokesman Will Griffin said Friday. There were 5,128 DODEA students worldwide registered to take AP tests this month.

College Board’s chief risk officer and general counsel Peter Schwartz called the lawsuit “wrong factually and baseless legally,” in a statement issued last week. “The College Board will vigorously and confidently defend against it and expect to prevail,” he said.