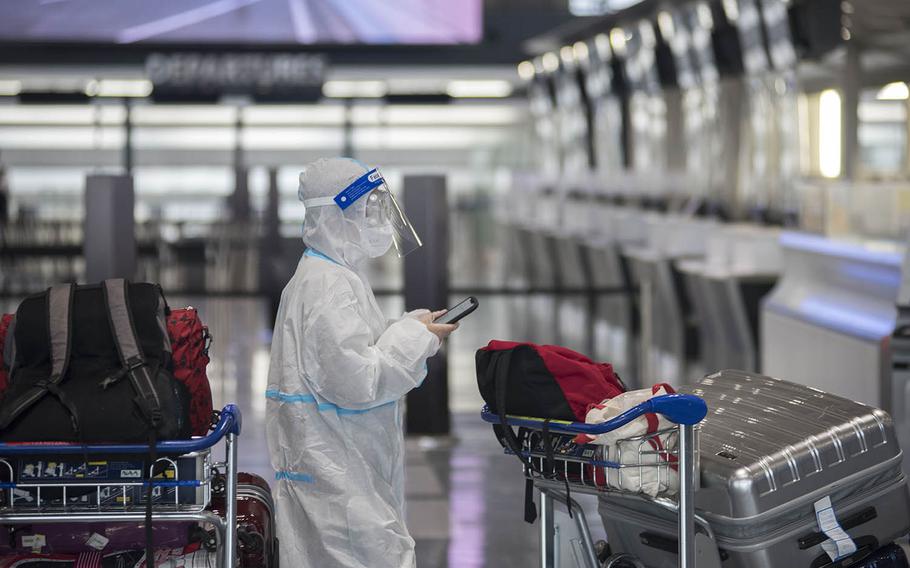 Buy Photo
A passenger waits in a line at Narita International Airport outside Tokyo, Friday, Jan. 15, 2021. Across Japan, 19,080 people tested positive for the coronavirus between Friday and Monday, Jan. 18, 2021, according to the World Health Organization. (Akifumi Ishikawa/Stars and Stripes)

YOKOSUKA NAVAL BASE, Japan – A Defense Department high school on Okinawa closed its doors this week after three “members of our Kubasaki High School family” tested positive for the coronavirus over the long holiday weekend, principal James Strait said in a Facebook post Monday.

“In accordance with public health’s guidance, a negative COVID test will be required for all students to return to school on Monday, Jan. 25,” he said in the post, referring to the respiratory disease caused by the virus.

All students and staff will be tested Thursday at the high school, which is on the Marine Corps’ Camp Foster and administered by the Department of Defense Education Activity. More information on the testing schedule is available on Kubasaki’s Facebook page.

Though the school building is closed, "teachers and students are continuing to engage in optional enrichment activities" online, DODEA spokeswoman Miranda Ferguson told Stars and Stripes on Wednesday.

Island-wide, Okinawa reported 219 new cases on Saturday and Sunday, according to the latest update on the island’s coronavirus informational website posted Sunday.

Across all Marine Corps bases on the island, commissary bagging services were suspended Monday for at least seven days “out of an abundance of caution relating to recent spikes of COVID-19 infections in Okinawa,” Marine Corps Installations Pacific announced via Facebook on Monday. Wait times for check-out lines “may be affected,” according to the post.

At Kadena Air Base on the island, seven people tested positive for the coronavirus since Friday, according to official Facebook posts on Friday and Tuesday. Four of those cases were discovered after patients developed symptoms and three were close contacts of earlier positive cases.

Japan-wide, 19,080 people tested positive for the virus between Friday and Monday, according to the World Health Organization. In Tokyo, 4,605 new cases were reported during the same period, according to the Tokyo Metropolitan Government’s coronavirus information website.

About 38 miles south of central Tokyo, Yokosuka Naval Base closed all of its gyms Tuesday until further notice after it was unable to trace the source of coronavirus infections among some daily gym users, according to a base Facebook post that day. The base’s enlisted club closed Saturday after one staff member tested positive.

Thirty-five people at Yokosuka, which is home to the Navy’s 7th Fleet, tested positive over the long weekend, according to a base statement Tuesday. Meanwhile, 40 patients recovered, marking the first time the base reported a decrease in total active cases this month.

Yokosuka now has 153 active coronavirus cases, down from 158 on Friday.

Naval Air Facility Atsugi, about 30 miles to the west, has had seven new cases since Friday, bringing the total number of active infections to 24, base spokesman Sam Samuelson told Stars and Stripes by phone on Tuesday. Three of the new cases were discovered during testing to leave quarantine and four were close contacts.

Marine Corps Air Station Iwakuni in western Japan also had seven people test positive for the virus since Friday, according to the base’s Facebook page. Four of those cases were close contacts, while the others were discovered after testing to exit quarantine.

About 225 miles west at Sasebo Naval Base, four positive cases were identified on Thursday and Friday, according to a post on base's Facebook page Tuesday. Two tested positive after displaying symptoms and the other two were their close contacts.

Base case numbers were accurate as of 6 p.m. Tuesday in Japan.