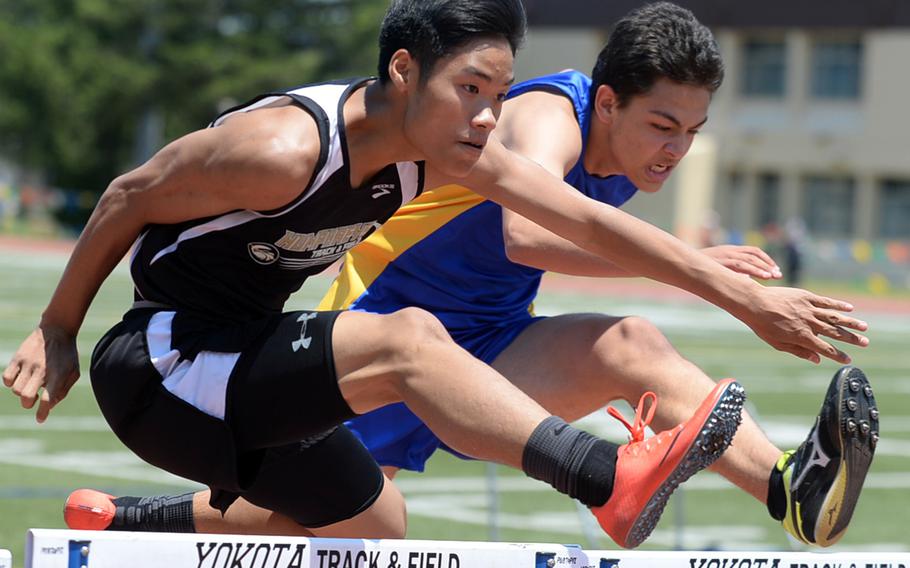 Track and field athletes are among those who will not get to compete in Department of Defense Education Activity-Pacific Far East tournaments this spring. (Dave Ornauer/Stars and Stripes)

CAMP FOSTER, Okinawa — All Far East high school spring sports tournaments scheduled for next month have been canceled due to coronavirus concerns, Defense Department schools in the Pacific announced Friday.

In addition, the Far East Honor Music Festival slated for April 20-24 at Yokota and the Far East Creative Expressions art show scheduled April 27-30 at Temple University in Tokyo have been canceled, said a statement from Department of Defense Education Activity-Pacific.

“DODEA understands the value these events bring to our students’ educational experience and that many will be disappointed by the decision; however, ensuring the health and safety of our students and employees is our highest priority,” the statement said.

Students and teachers expressed disappointment at the news.

“Right now, I feel as if my heart has been ripped out of my chest,” said Humphreys senior track sprinter Jaela Higgs, who had hoped to beat Far East and Pacific records in the 100- and 200-meter dashes.

The Far East music festival is one of just two regional events that DODEA-Pacific musicians experience each year.

Others took the long view.

“Although students were looking forward to playing (Far East) sports, we have to remember that health is the most important thing,” said Bethani Newbold, a junior pitcher whose Daegu softball team was set to defend its Far East Division II title.

“Of course, we all recognize the necessity to discontinue travel and large gatherings at this time, (but) it’s just a shame,” Humphreys band instructor Scott Rumery said.

It’s only the second time since DODEA-Pacific was established in the late 1940s that Far East tournaments have been canceled.

The decision this year came a day after DODEA’s Japan district announced it was canceling its entire high school spring sports calendar for the rest of the school year due to travel restrictions in place through May 11.

Also Thursday, DODEA-Pacific officials stated that Okinawa schools would curtail their spring sports schedule through spring break, and that such activity could resume when school re-opens on April 13.

Once the Defense Departments travel ban is lifted, DODEA-Pacific may stage alternative academic and athletic activities at a community or district level in May, the statement said. An update is to be provided sometime next month.