Despite recent tension with US in Pacific, China invited to 2018 RIMPAC 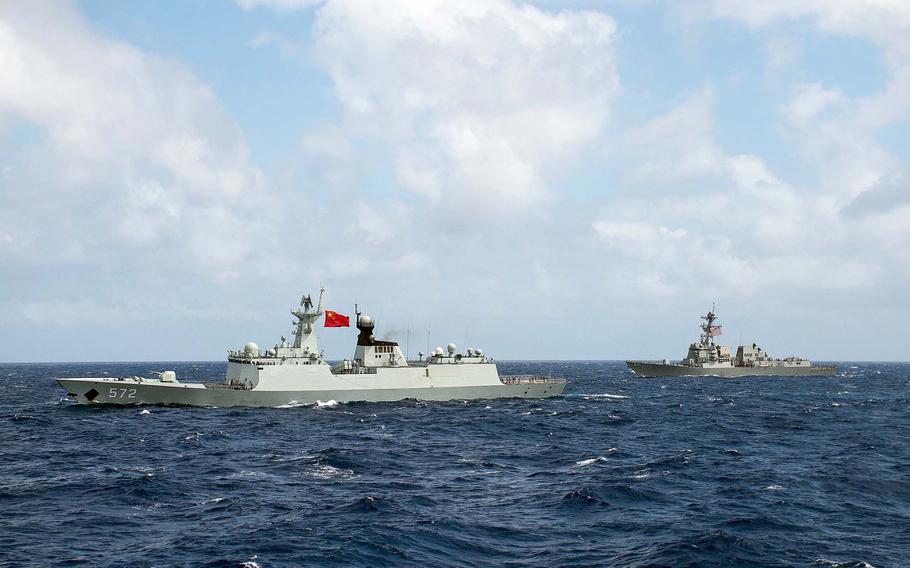 The Chinese frigate Hengshui and the guided-missile destroyer USS Stockdale transit in formation during Rim of the Pacific 2016. China has been invited back for RIMPAC 2018, despite recent incidents with U.S. ships and aircraft. Ryan J. Batchelder/U.S. Navy (U.S. Navy photo)

FORT SHAFTER, Hawaii — China has been invited to attend the Rim of the Pacific exercise in Hawaii next year, the Navy said, despite multiple reports this month of China harassing U.S. military planes over Pacific waters.

All 26 nations that participated in the 2016 RIMPAC, including China, have been formally invited to next year’s exercise, said Lt. Cmdr. William Knight, a spokesman with U.S. Pacific Fleet in Hawaii.

Neither the Pentagon nor the White House have publicly commented yet on the 2018 invitation.

China’s last invitation to RIMPAC, which is considered one of the world’s most prestigious military exercises, drew criticism from both sides of the aisle in Congress.

Critics say that China’s participation in RIMPAC should be contingent on it altering aggressive behavior, particularly in the disputed South China Sea.

The United States has criticized China for creating artificial islands in the sea capable of hosting military planes.

In 2016, Republican Sen. John McCain said he would not have invited China because of its “bad behavior,” noting that the country had expanded islands by 600 acres and built a runway on one.

“I don’t think there is any doubt about their territorial ambitions,” he said.

An earlier letter to the Pentagon from McCain and Sen. Jack Reed, a Democrat, called for “policy options that impose costs on China’s disruptive behavior, not reward it.”

China’s conduct in the South China Sea has changed little since then; it has added 3,200 acres of landfill to mostly submerged reefs, according to satellite imagery posted online by the nonprofit Asia Maritime Transparency Initiative.

Former Defense Secretary Ash Carter supported China’s invitation at the time because it wanted to focus on common security challenges like piracy and terrorism, as well as to build understanding between the two militaries.

This would be China’s third consecutive participation in RIMPAC. In 2016, the country sent a destroyer, frigate, submarine rescue ship, supply ship and hospital ship.

China’s participation has been limited mostly to rescue and humanitarian drills.

The United States and China have had limited military-to-military interactions since China’s crackdown in 1989 on demonstrators at Tiananmen Square in Beijing, which resulted in Congress banning the sale of arms to China.

In recent years, tensions between the two nations have ratcheted up over China’s claims of sovereignty over most of the South China Sea. Vietnam, the Philippines and other countries also have claims on some of the territory within the sea, as well as rights to their exclusive economic zones.

An international tribunal last year invalidated some of China’s sea claims, though Beijing has ignored the ruling.

China has turned submerged reefs in the Spratly Islands into artificial islands, then added artillery, radar and airstrips.

While the U.S. Navy has operated in the South China Sea for decades, it only resumed “freedom-of-navigation” operations – which challenge claims violating international maritime law -- in 2015, by sailing ships close to the islands. By then, China’s island development had been well underway.

The Navy destroyer USS Dewey on May 20 became the first ship to conduct such an operation under the Trump administration, sailing within 12 nautical miles of Mischief Reef in the Spratly Islands.

As an artificial island, Mischief Reef isn’t entitled to a territorial sea under international maritime law.

China officials said the ship had trespassed and that it had been warned to leave.

Meanwhile, in the air, two Chinese fighter jets on May 17 intercepted a U.S. plane used to detect radiation from nuclear weapons while it was flying over the East China Sea.

The Air Force described the actions by the Chinese pilots as “unprofessional.” CNN reported that the fighter jets came within 150 feet of the Air Force plane.

On May 24, Chinese jets zoomed within 200 yards of a Navy P-3 Orion surveillance plane about 150 miles southeast of Hainan Island, which is considered part of mainland China.

Despite such incidents, U.S. Pacific Fleet Commander Adm. Scott Swift has repeatedly stated that military relationships between the two countries are key to finding common ground and preventing escalation of a potential crisis.