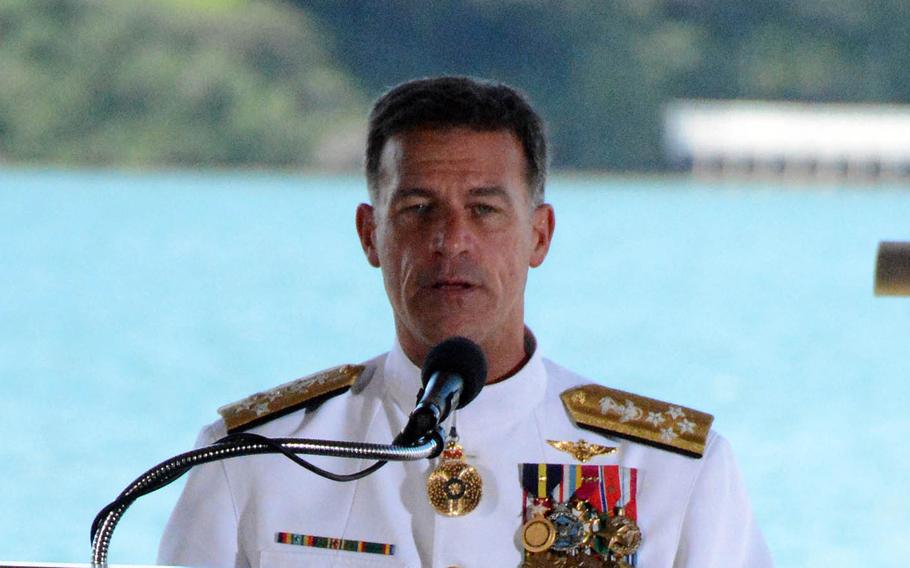 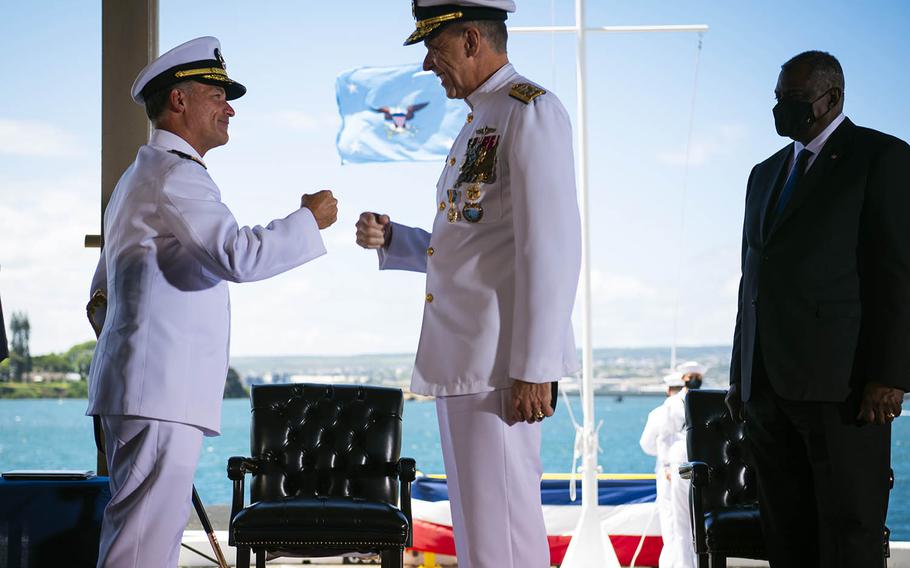 JOINT BASE PEARL HARBOR-HICKAM, Hawaii — Adm. Philip Davidson took a parting shot at Beijing on Friday as he ended his 39-year Navy career and handed the reins of U.S. Indo-Pacific Command to the former head of the Pacific Fleet.

“Make no mistake, the Communist Party of China seeks to supplant the idea of a free and open international order with a new order, one with Chinese characteristics, one where Chinese national power is more important than international law,” he said during an afternoon ceremony that included remarks by Defense Secretary Lloyd Austin and Army Gen. Mark Milley, chairman of the Joint Chiefs of Staff.

Beijing’s approach to the region includes efforts to “coerce, corrupt and co-opt businesses, organizations and the people of the Indo-Pacific,” Davidson said.

INDOPACOM’s new leader, Adm. John Aquilino, who took command of the Pacific Fleet in May 2018, is expected to maintain that hardline regarding China.

During his confirmation hearing earlier this spring, he told senators the United States needs to bolster funding for the Pacific Deterrence Initiative to better challenge Beijing’s influence in the region. He also warned that China was increasing its stockpile of nuclear weapons “faster than anyone previously believed.”

Austin told the audience in socially distanced seating that Davidson had done “an absolutely superb job — at the helm of this organization.”

“He is a so-called ‘old salt’ — the Navy’s longest serving surface warfare officer,” he said.

Austin praised Davidson for the 40 freedom-of-navigation operations conducted under his three years at the helm. The missions, in which ships are sent through contested international waters, are intended to underscore America’s support for open access to shipping lanes.

The operations have been primarily directed toward China and its contested claims of sovereignty over most of the South China Sea.

Davidson, who will now retire to a lake home in upstate New York with his wife Tracy, spoke of the “symmetry” of ending his long Navy run at Pearl Harbor.

He noted that behind him was the USS Arizona Memorial, a battleship whose sinking propelled America into World War II. Docked nearby is the battleship Missouri, on which instruments of surrender were signed by the Japanese in 1945 to end the war.

“My first tour was here, and now my last,” he said, referring to his inaugural Navy tour aboard the frigate USS Badger. “I can’t help but reflect on how special this place is to me and my family.”

As a lieutenant during operation Desert Storm against Iraq in 1990-91, Davidson “bravely led a team in support of amphibious operations that held a major Iraqi force in place on the Kuwaiti coast,” Austin said. “That prevented the enemy from attacking our ground forces and helped swiftly end the war. He earned the Navy Commendation Medal for Valor for that operation.”

Aquilino, a naval aviator, earned his flight wings in 1986, and has flown F-14 Tomcats and F-18 Hornets, according to his official biography. He deployed for numerous operations, including in support of Enduring Freedom and Iraqi Freedom.

“He’s commanded a squadron, a wing and a strike group, which means he knows a thing or two about leading American forces into combat,” Austin told the audience.