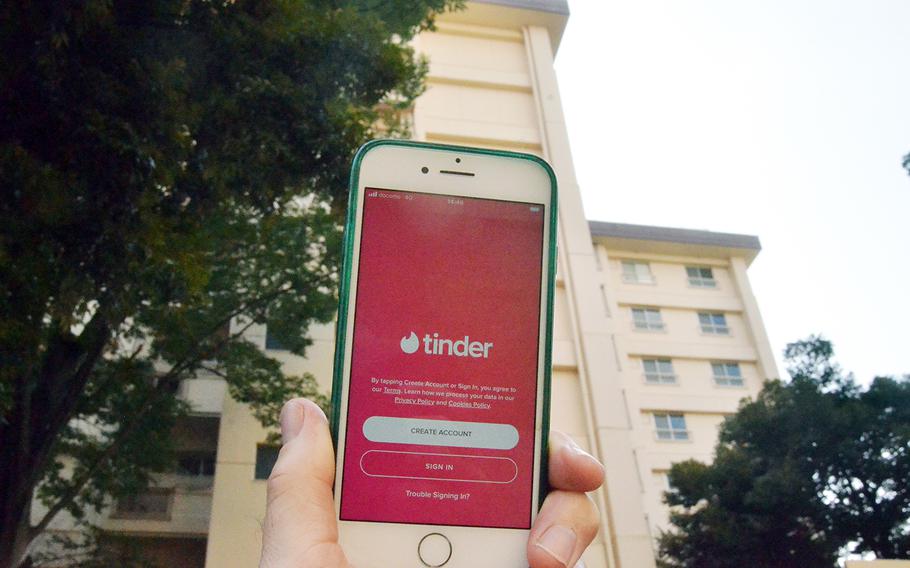 Buy Photo
During an American Forces Network interview on Tuesday, Aug. 4, 2020, the senior enlisted leader for U.S. Forces Japan said some troops have broken quarantine to "hook up" with people met via dating apps. (Seth Robson/Stars and Stripes illustration)

YOKOTA AIR BASE, Japan — The senior enlisted leader for U.S. Forces Japan has singled out military personnel for using dating apps and “hooking up” while under quarantine.

To prevent the coronavirus’ spread, U.S. service members and civilians arriving in Japan are placed in “restriction of movement,” or ROM, for 14 days. People will soon have to test negative for the illness before being released, under a new policy adopted after a spate of cases were brought to Japan by personnel arriving from the United States.

“We’re seeing some folks that … are like, ‘OK, I’m in here but I can just kind of sneak out.’ What I would ask is if you know that somebody is doing this … ask them to stop,” he said, without elaborating on the violations or where they happened. Some in quarantine are using dating apps such as Tinder and Bumble and “hooking up with folks,” he said, without specifying whether the other parties involved were from the military community or outside the gates.

U.S. installations in Japan have differing policies about guest access, which has been limited or outright barred during the pandemic.

“They are not supposed to go out, but that doesn’t mean you go in,” Winegardner said of people in quarantine.

Troops not under quarantine have also brought the coronavirus onto bases after going into unauthorized locations and establishments, he added.

Rule-breakers will face “quick and appropriate action,” Col. Thomas Matelski, commander of U.S. Army Garrison Japan, said in a video message Thursday, after people from the garrison were seen partying in off-limits parts of Tokyo.

“It seems like a few members of our team are starting to lose focus,” said Matelski, who oversees Camp Zama and Sagami General Depot in Kanagawa prefecture.

Maj. Gen. Viet X. Luong, commander of U.S. Army Japan, in his own video message Thursday cited a “recent spike” in violations as a reason for increasing the health protection condition and tightening restrictions.

The people in the military community who are testing positive are in their 20s and 30s, Winegardner said.

Rule-breakers have lost two levels of rank and received extra duties and fines, he added, without specifying how many people had been punished or whether they included civilians.

“What is coming to you, I’m glad because these are the things that are endangering us,” he said. “I know commanders are getting upset with the lack of adherence. Commanders are starting to get real serious about this.”

Japanese authorities are also looking into violations of rules by U.S. personnel, he said.

A person who recently took a domestic flight in Japan to reach their duty station after arriving from the U.S. and later received a positive coronavirus test result could face a fine of $5,000 to $7,000, Winegardner said.

However, he noted, only one person assigned to USFJ has been hospitalized with the coronavirus and nobody has been in intensive care since the pandemic began.

U.S. forces have limited testing facilities on some bases and are sending tests to Okinawa and South Korea for processing, he said. Officials are looking at using contractors to increase testing capacity.

More testing will allow the military to get back to a more normal battle rhythm with exercises and deployments, Winegardner added.

“The last thing other countries want to see is us bringing the virus over there,” he said.