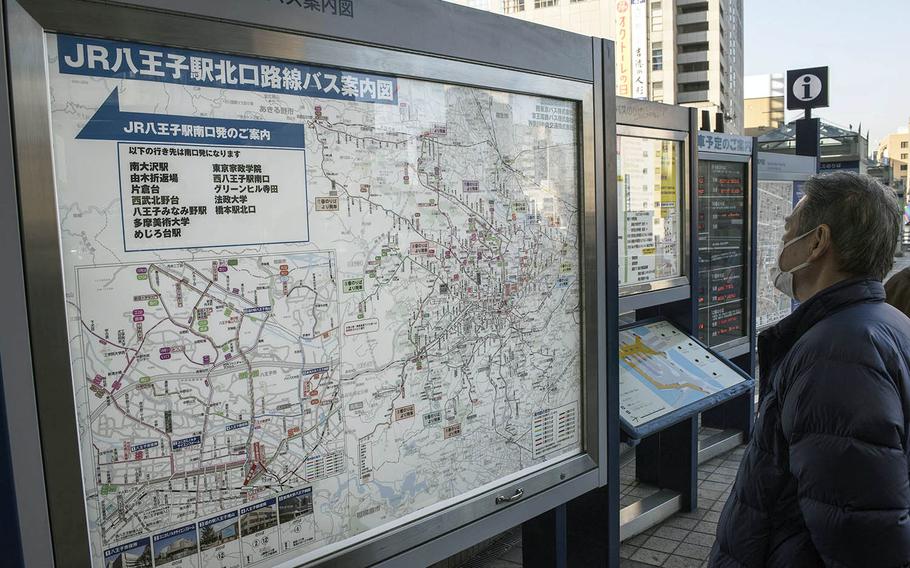 Buy Photo
A masked visitor scans a map outside the train station in Hachioji, Japan, Feb. 2, 2021. (Theron Godbold/Stars and Stripes)

South Korea, meanwhile, reported its lowest daily total since November, and a government official in Seoul said restrictions on social distancing and business closures may ease in the coming weeks.

With many U.S. service members taking time off to watch the Super Bowl, reports of new coronavirus infections over the weekend until 6 p.m. Monday were comparatively low. Bases in Japan reported two and South Korea reported 24 from the previous two weeks.

The Tokyo Metropolitan Government on Monday reported another 276 people had contracted the virus, the lowest one-day count since Dec. 7, also a Monday, according to public broadcaster NHK and metro government data.

Monday totals are typically low because fewer test facilities are open on weekends. The daily count continues to fall, however, from the pandemic high of 2,447 on Jan. 7. Half as many people are contracting the virus each week in Tokyo as were becoming infected a month ago.

The city and its three surrounding prefectures, where the U.S. Army, Air Force and Navy headquarters are based, are under a state of emergency until March 7. The emergency restrictions are voluntary, but U.S. installations imposed similar measures on their populations.

Tokyo, population 13.5 million, has reported 104,121 people infected with the virus and at least 1,023 deaths, according to the World Health Organization. The city’s central precincts have been off-limits to U.S. personnel for months.

Kadena Air Base on Okinawa reported one person, an employee at the Navy Gateway Inns and Suites, became ill with symptoms of COVID-19, the coronavirus respiratory disease, and tested positive, according to a Facebook post Friday evening. Public health authorities identified and quarantined an unspecified number of the employee’s contacts.

“All work areas where the individual was assigned have been cleaned/sanitized thoroughly including common areas such as laundry rooms and break areas,” the post said.

Yokosuka Middle School at Yokosuka Naval Base, south of Tokyo, on Sunday reported that someone there tested positive for COVID-19, according to a letter to families and staff from Principal Stacey Hull-Walsh. She wrote that “based on current knowledge, there is no reason to believe the school community member with COVID was exposed to the virus at school.”

School continued as normal Monday and an unspecified number of close contacts remained home, a spokeswoman for Department of Defense Education Activity-Pacific, Miranda Ferguson, told Stars and Stripes via email.

Numbers fall in South KoreaSouth Korea reported 289 new infections on Sunday, the first one-day count below 300 since Nov. 23, according to the nation’s Central Disease Control Headquarters and WHO.

“We are relieved that the number of our country’s COVID-19 confirmed cases has dropped to over 200 today,” Jeon Hae-cheol, the minister of interior and safety, said Monday at a headquarters meeting.

He said some restrictions may ease after the three-day holiday around the lunar new year Friday, if numbers continue to fall.

South Korea has reported nearly 81,000 infections during the pandemic, according to WHO, and nearly 1,500 deaths.

Seoul, the capital, on Friday reported 142 new infections; Gyeonggi province, the site of Camp Humphreys, the largest U.S. base in the country, reported 108, according to the Korean Disease Control and Prevention Agency.

U.S. Forces Korea reported 15 new arrivals from to the peninsula tested positive between Jan. 21 and Saturday, according to a Sunday news release.

Two service members arrived at Osan Air Base aboard the Patriot Express, a government-chartered passenger air service, on Jan. 25 and Wednesday. Eleven service members, a civilian and a contractor arrived on commercial flights at Incheon International Airport on Jan. 21, 22, 23, and Feb. 2 through Saturday.

Another nine people already in South Korea tested positive between Jan. 29 and Thursday, according to a Friday news release.

An airman at K-16 Air Base turned up Jan. 29 as part of the USFK “enhanced surveillance” testing program; five service members at Camp Casey and one at Camp Carroll tested positive Thursday in the same screening program, according to USFK.

A South Korean service member assigned to a combined U.S.-Korean unit and a service member’s spouse, both from Camp Humphreys, tested positive Thursday before exiting quarantine, according to USFK.

The command said another four people were deemed “false positives” on tests Thursday due to a defective component of the test, according to a Saturday news release.