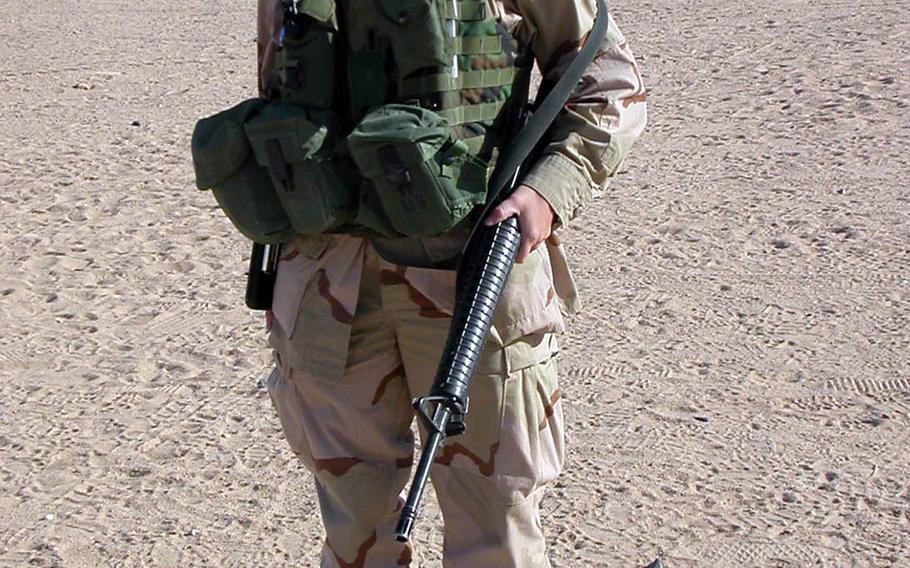 TOKYO – Athletes in Japan for pre-Olympic and Paralympic competition spend most of their time in hotel rooms and train only a few hours each day, according to a disabled Iraq War veteran preparing to race in Yokohama on Saturday.

The limits on the athletes’ movements are part of the Japanese government’s effort to stem the coronavirus’ spread ahead of the coming summer games. Tokyo is experiencing a wave of new infections that started in early April.

Yamashita Park, just south of the Japanese capital, is hosting World Triathlon Championship Series and World Triathlon Para Series races in the leadup to the games in July.

One of those who will compete is former Army lieutenant and 2016 Paralympic paratriathlon bronze medalist Melissa Stockwell.

The 41-year-old Colorado native deployed to Iraq in March 2004 with the 1st Cavalry Division out of Fort Hood, Texas, and lost a leg about a month later to a roadside bomb in Baghdad. She was the first female American soldier to lose a limb in the Iraq War.

Since arriving in Japan on Tuesday, Stockwell, who was medically retired from the Army in 2005, and other athletes have been stuck in their hotel rooms in Yokohama’s Chinatown and only allowed to leave at set times for training in a pool or on stationary bikes and treadmills. Food is left at the athletes’ doors, she said during a phone interview Thursday.

“It’s not optimal, but everyone who is here has to deal with it,” she said. “We are all happy to be here and be racing and this kind of comes with it.”

Stockwell said she expects athletes’ restrictions will be the same during the Olympics, which run July 23-Aug. 8, and the Paralympics, slated for Aug. 24.-Sept. 5.

Tokyo, Osaka and its neighboring prefectures of Hyogo and Kyoto are under a state of emergency until May 31 in which some business hours are curtailed, alcohol sales are reduced, and employees are encouraged to work from home.

The triathletes will complete a half-mile swim, 13-mile cycle and 3.1-mile run during the Yokohama race, which is a qualifying event for the Paralympics, she said.

Ranked in the top six triathletes worldwide in her class, Stockwell said she was physically fit before her injury but not a competitive athlete.

The attack that cost her a leg happened on a routine convoy. There was a big explosion and a lot of blood.

“My leg had been severed, but I didn’t know it,” she said. “There wasn’t a lot of intense pain until the medic put a torniquet on.”

Stockwell was taken to the 31st Combat Support Hospital in Baghdad’s Green Zone for initial surgery before a flight out of Balad Air Base to Landstuhl Regional Medical Center, Germany, and another back to the States, she said.

“Losing a leg, you’re not sure what life will be like,” she said. “You’re not sure about independence and whether you can be an athlete again.”

Sports were a big part of her recovery, Stockwell said. She was the first Iraq veteran to compete in the Paralympics. She swam freestyle and butterfly and carried the team’s flag at the Beijing games in 2008.

“It showed me how much ability there is in my disability,” she said.

Experience in Iraq is something Stockwell draws on during races.

“When I’m on a racecourse and I’m trying to push myself a little harder, I think that I’m one of the lucky ones and I think about those who made the ultimate sacrifice,” she said. “It gives me that extra push to get to the finish line.”

A mother of two who fuels up for competition with oatmeal, bread, and peanut butter, Stockwell has a team of supporters who had hoped to be with her in Japan. Instead, they will watch on television. Saturday’s race will be shown live by Japanese broadcaster NHK from 10 a.m. to 3:15 p.m.

Stockwell traveled with U.S. service members on her flight to Japan and hopes members of the military community will be rooting for her.

Race organizers have barred spectators from Yamashita Park during the event and have asked people not to gather and cheer along the course route, which runs through surrounding neighborhoods.

Athletes are grateful that the Olympics and Paralympics are going ahead despite the pandemic, Stockwell said.

“All of us racing want to be back here later this year,” she said.